If you are a regular reader of this blog, you would already know that turmeric or curcuma longa has been used as a spice for centuries in Asian cuisine and is widely cultivated in India.

Curcumin and other curcuminoids ( a key which are chemical compounds in turmeric) offer numerous health benefits (Here is a comprehensive list of turmeric benefits>) since they are a powerful antioxidant, anti-inflammatory, antiseptic, anti-fungal, anti-bacterial agents.

It is a popular ingredient in Ayurvedic medicine.

They are generally available as capsules, tincture or liquid extracts.

Peppercorns which are got from the piper nigrum evergreen vine give us black, green and white peppercorns.

To make black pepper, the peppercorns must be plucked just before ripening, left to ferment and then dried until they shrivel and turn black.

Most of the world’s supply of black pepper comes from India. Apart from being used to season food, black pepper is also used for medicinal purposes. 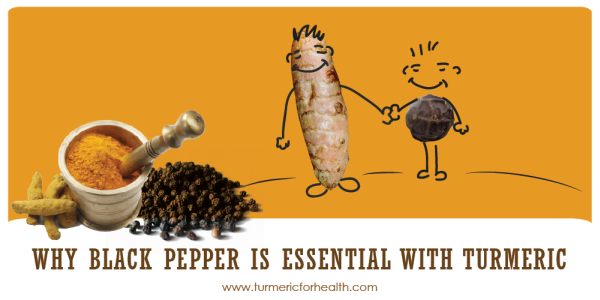 Health benefits of any food or herb are based on its key active ingredients.

Piperine is the key chemical in black pepper. It is similar to capsaicin a chemical in chili and offers many health benefits. Curcumin which is a polyphenol plays the same role in turmeric.

Both these compounds have been studied to examine the potential health benefits they can offer individually or together.   Here are some of their benefits:

One important question which must be popping in your mind right now would be why among so many spices are we talking about black pepper?

The answer is really interesting too. One problem with curcumin is its low levels of bioavailability.

Most of the curcumin that is ingested gets metabolized before it can get absorbed. Piperine is said to help make curcumin more bioavailable.

This could be because it could inhibit certain intestinal digestive enzymes. This increases the amount of any drug or supplement that can be absorbed by the body. They also do not get degraded quickly.

Hence, there are studies to test if co-administering curcumin with piperine could improve the bioavailability of the former.

These studies have been conducted on humans and laboratory animals.

One study found that when even 2g of curcumin was ingested, its serum levels were very low. However, when 20mg piperine was added to curcumin the bioavailability increased by 2000%.

The bioavailability, serum levels and levels of absorption of curcumin all improved dramatically.

What it means: Thus, if one takes turmeric, most of it is unutilized unless supplemented by addons such as black pepper.

Piperine in black pepper can trigger TRPV1 (transient receptor potential vanilloid type-1) in the body. This triggering can reduce pain.

Piperine is also used as an analgesic cream that can be applied topically to the skin to relieve pain.

Some studies have focused on using piperine as a new way to kill chronic pain – especially neuropathic pain which is untreatable.

Curcumin has been studied for its anti-inflammatory capabilities especially in the treatment of rheumatoid arthritis, ulcerative colitis, and other inflammatory conditions.

Laboratory studies were conducted on the way curcumin can be used as an anti-arthritic agent. An animal model of rheumatoid arthritis was used and 3 curcuminoids were studied.

The curcuminoids were administered before and not after inflammation set in. It was found that oil-depleted turmeric fraction was not as effective as a commercial composition that contained 94% combination of the 3 curcuminoids in combating inflammatory conditions.

However, long-term use can cause serious side effects. Hence, safer alternatives like curcumin are being studied for their potential anti-inflammatory benefits that can be used long-term without any side effects.

Curcumin is able to inhibit the activity of cytokines and enzymes such as COX-1 and COX-2. It has been recommended as a treatment for chronic neurodegenerative diseases in combination with lower doses of NSAIDs.

Dietary polyphenols like piperine and curcumin have been studied for their effect on the prevention of breast cancer. Mammosphere formation, which is a marker of breast stem cells were studied.

Turmeric and black pepper compounds both inhibited mammosphere formation. They also did not cause any toxicity, therefore showing that they could be possible cancer preventive agents.

Current breast cancer treatments are often ineffective and very often even after chemotherapy and other treatment, the cancer cells reappear. According to new studies, this could be because cancer stem cells still remain and could cause tumors to recur after a period.

In a University of Michigan study, cancer cells were injected with a potent solution of piperine and curcumin that was at least 20 times stronger than what is normally consumed through food.

Breast stem cell markers were studied. The self-renewal process of breast stem cells that is the hallmark of initiating cancer was interrupted.

This is considered a significant development.

Further, both compounds did not affect normal breast tissue. Sometimes women who are susceptible to breast cancer may be advised to take medications like tamoxifen. However, these can be toxic.

Natural compounds, which offer similar benefits and are non-toxic, could be a safe alternative therapy.

Another benefit is that piperine and curcumin target self-renewal of all stem cells and not just those that are estrogen sensitive like tamoxifen.

This theory offers hope to all women who develop breast cancer not just the estrogen-driven kind.

Turmeric and black pepper could be combined to fight high cholesterol levels, obesity, and diabetes.

Diet-induced bodily changes to blood glucose, body weight, low-density lipoprotein (LDL) or bad cholesterol and triglyceride could be affected by CPQ. CPQ is an acronym for the combination of curcumin, piperine, and quercetin (got from onion skin).

Presence of flavonoids in CPQ is possibly responsible for many of the reactions like a decrease in glucose transport. These studies were conducted on laboratory rats.

This is due to the capacity of curcumin to prevent the growth of Helicobacter pylori bacteria which causes peptic ulcers and the protective capability of piperine.

Both also have antioxidant benefits.

Hence, they can benefit from improving memory loss and protect people from cognitive impairment from neurodegenerative diseases like Alzheimer’s.

Curcumin has an anti-amyloid ability that can reduce amyloid pathway in Alzheimer’s. Both low and high doses of curcumin fed to laboratory mice seemed to reduce age-related memory loss.

The dosage of turmeric varies depending on the medical condition. As with most herbal supplements, turmeric has no specific dosage guidelines.

As I keep saying, again and again, I am not in favor of turmeric supplements and support using turmeric in your diet. Use supplements only in cases when you cannot do so.

My detailed article on turmeric dosage can be read here.

Black pepper too can be easily added to your diet in curries, salads, and dressing.

A great way to have turmeric and black pepper together is Golden paste. Get its recipe here.

Black pepper must not be consumed in excess of 1 tsp a day when certain medications like digoxin or phenytoin are being taken.

The rate at which these medications are cleared by the liver could slow down when black pepper is consumed in excess.

Turmeric as spice is considered to be very safe. Turmeric supplements must not be consumed in excess and for long periods. This could cause indigestion, dizziness, nausea or diarrhea.

Those who are pregnant and breastfeeding are advised to avoid all types of herbal supplements. Diabetic patients, those due for surgery and those with gallbladder problems must also stop using turmeric supplements.

While both turmeric and black pepper are considered very safe and have been used for thousands of years, if you suffer from some specific medical problems and are not sure about using them, please consult your doctor.