Up till now we have covered a vast number of topics as to how turmeric helps in dealing with various conditions.

And if you have gone through most of them, we have been talking mostly about curcumin and its medicinal value.

This may give an impression that curcumin is the only beneficial ingredient in turmeric. But is it so ?

Is turmeric only about curcumin or is there more to it? What is the difference between turmeric and curcumin? I have tried to answer these questions using research studies in this article.

Turmeric is one of the many spices used in India.

It is a herb that belongs to the ginger family and is cultivated mainly in Asia.

Turmeric plant is relatively 3-5 feet in height, with pointed leaves and yellow flowers .

Turmeric’s use as herb dates back to 5000 years ago and it has been documented in traditional medicine systems.

The rhizome is cleaned, boiled and dried to give turmeric powder. Turmeric oil is extracted from the rhizome. Both these components have medicinal value.

So what imparts medicinal properties to turmeric? The principal fractions of turmeric with medicinal value are:

Most of the research on turmeric is focussed on curcuminoids and this group is said to be responsible for most of its above mentioned properties. Nonetheless turmeric fractions void of curcuminoids also have biological activity.

Apparently 20 molecules in turmeric have antibiotic property, 14 have anti-cancer, 12 are said to have anti-tumor, 12 anti-inflammatory and 10 of them are antioxidants. Astounding right!?

Moving to curcumin, we will try and figure out how essential is this compound to turmeric.

Curcumin is one of the important components of the group curcuminoids. It is the bioactive ingredient of turmeric.

Its structure comprises of aromatic ring structures and hence it is a polyphenol but in lay man terms, it is an antioxidant. The structure was first identified in 1910.

Curcumin has anti-inflammatory, immunomodulatory, antimicrobial, chemosensitizing and antioxidant properties. It interferes at genetic and cellular level to cause cell death and prevent cancer cells from proliferating.

One of the most important attributes of curcumin is that it inhibits the activity of a group of proteins called nuclear factor-kappaB.

This acts as a switch that regulates inflammation and cancer cell proliferation.

Numerous clinical trials have been conducted on the use of curcumin in various disorders such as neurological, cardiovascular, metabolic, autoimmune and psychological conditions

. Curcumin is used as a supplement in several countries, including India, Japan, the US, Thailand, China, Korea, Turkey, South Africa, Nepal, and Pakistan.

Naturally, curcumin accounts for around 2-5% of the rhizome’s content.

That means large amounts of turmeric powder would be required to obtain an effective and substantial dose of curcumin.

This is the principal reason why curcumin supplements are manufactured in the first place.

And there is another reason: bioavailability.

What is the whole issue about turmeric bioavailability?

Bioavailability is a term used to describe how much amount of the component ingested by you is available to the body to cause a pharmacological effect.

Natural turmeric powder has low bioavailability- most of the turmeric ingested is not absorbed by the intestines.

Curcumin is found to be safe up to 12g/day (taken for a short period) but still, it suffers from poor absorption, rapid metabolism and quick elimination from the body. This is why scientists have developed different formulas of curcumin such as:

Curcuminoids do not dissolve in water but they have a high affinity for fats (lipids). This is the crux of the formulation, Meriva which is a patented version of curcumin and soy lecithin designed to increase its bioavailability.

There is another interesting patented formula of curcumin designed with the same intention called BCM95. Instead of making use of synthetic agents to increase curcumin’s absorption, this formula contains a combination of ar-tumerone and curcumin.

Ar-tumerone is an important constituent of turmeric oil. Tumerones comprise 40-50% of the volatile oil.

One 400 mg dose of this new bioavailability-enhanced turmeric extract is equivalent to taking 2,772 mg of standard “95%” curcumin extract or 2,548 mg of plant-bound curcumin extract with piperine.

This suggests that natural constituents of turmeric root can enhance the absorption of curcumin and these are generally lost in the process of extraction and purification.

But should we only see curcumin when we look at turmeric?

Let us find out how it fares when compared with the whole turmeric. 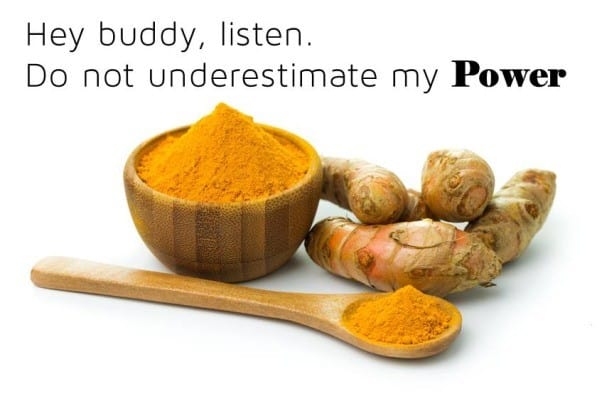 Comparison between turmeric and curcumin’s efficacy

Let’s now see what research studies talk about when comparing curcumin and turmeric.

A study was organised wherein the ethanolic extract of turmeric was compared with curcumin in terms of anti-inflammatory, immunostimulatory and antioxidant activities.

Turmeric was found to increase the expression of perforin (a protein that plays an important role in immune responses) and it was twice more effective in initiating the body’s immune responses.

Turmeric extract was also more effective in terms of antioxidant property than curcumin, as its percentage inhibition of production of reactive oxygen species was twice that of curcumin.

Beta-amyloid is a protein that is of importance in Alzheimer’s disease. It forms aggregates in the brain cells, interrupts brain signals and leads to the death of nerve cell and loss of brain function.

A study was conducted to evaluate inhibition of amyloid beta aggregates by standardized turmeric extracts (basically having everything of turmeric) and just curcuminoids.

Interestingly none of the curcuminoids were found to be inhibitors of this action while one of the turmeric standardized extracts showed strong inhibition indicating molecules other than curcuminoids found in turmeric could be developed as drugs to treat Alzheimer’s.

What does this mean? Research studies prove that turmeric extracts show more efficacy when it comes to pharmacological activities and apart from curcumin, turmeric possesses a number of bioactive molecules that could potentiate the activity of curcumin.

Lastly, let us discuss what turmeric minus curcumin can do.

This will also help prove that believing that turmeric is just curcumin is a mistake.

Most of the articles listed to date, mostly focus on the health benefits of turmeric mediated by curcumin.

Turmeric and curcumin are thought to be synonymous. Nonetheless, curcumin free fractions also have medicinal value.

Even Curcuminoid free extract of turmeric has anti-inflammatory property

To understand whether curcumin uniquely exhibits anti-inflammatory property or whether molecules add to this effect, researchers investigated curcumin free turmeric extracts for this activity.

So definitely turmeric has a vast array of compounds that exert similar medicinal properties like curcumin.

A research study was conducted to evaluate the effect of curcuminoid free turmeric extract on immune responses.

This extract showed dual immune function: it stimulated the development of immune responses which is desirable in case of wound healing and infection and it also suppressed inflammation which is beneficial in case of diseases like arthritis.

Even by-products of curcuminoid extraction are natural antioxidants

You will be surprised to know this – spent turmeric oleoresin is an industrial waste resulting from completion of extraction process of turmeric curcuminoids.

Research proves that even this fraction of turmeric possesses strong antioxidant potential suggesting its use as a natural antioxidant and preservative.

Research proves that turmeric oil has a number of medicinal properties:

This is also one of the reasons why I believe fresh turmeric is better than even powdered turmeric as it does not have turmeric oil in it.

Therapeutic properties of other constituents of turmeric

The story does not end here 🙂

Germacrone reverses drug resistance in breast cancer and also has an anti-tumor effect.

Elemene is found to help in treating stomach cancer.

What does this mean? Turmeric has a wealth of compounds that have unique as well as similar pharmacological properties as curcumin. Curcumin free extracts of turmeric are as effective as curcuminoid groups 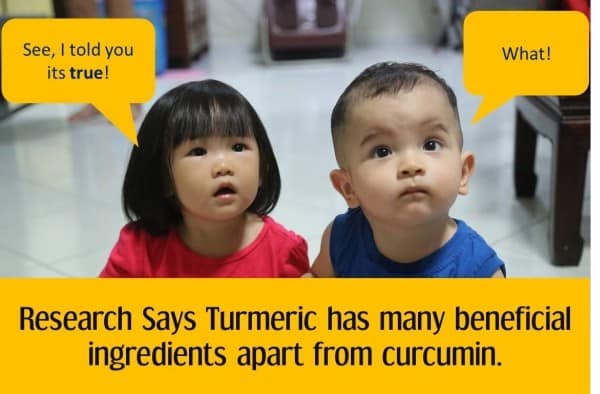 Based on the research and scientific evidence we have covered, we would suggest that turmeric is superior to standalone curcumin.

Yet there are certain conditions such as cancer where curcumin supplements may work better.

On the other hand, in case of arthritis induced inflammation or burns it would be advisable to take turmeric as whole or apply its paste.

Further, if you intend to take to boost your immunity, we would advise natural turmeric and pepper combination.

I am sure after reading all the arguments, you will be convinced that turmeric is much more than just curcumin and thus it is best to take turmeric and not curcumin (except maybe in certain cases).

Do let me know what you think.

Hope you will start including turmeric in your diet from today!

175 thoughts on “Should You Take Turmeric or Curcumin? Which is Better?”