It is important to know what is turmeric composed of as that is what makes it unique.

When we started looking for information there was not much written in simple words.

Either there was little information or in very complicated language.

Somehow we managed to distill some key points regarding this amazing herb here.

The exact origin of turmeric is not known but it is believed to be native to Southern India and Indonesia.

In these parts of the world, turmeric has been used for thousands of years and has become an integral part of their food and traditional medicine.

Turmeric has a special place in Indian tradition and worship too. It is used to worship Sun God. It is also worn by people as a part of the purification process.

The usage of turmeric in India is very very old and its usage is documented in various forms.

It was used a beauty aid, spice, and medicine – an all in one herb with amazing properties. It is thus not surprising that turmeric has such a place in ancient Indian medical science – Ayurveda.

Turmeric has not only been used by Indians, but it was also used by Buddhists monks which traveled to various parts of the world to die their robes.

There are also evidences that turmeric was used as a part of Chinese medicine around 1,000 years ago.

Turmeric was not part of the western world till recently.

There have been only a few pieces of evidence stating its usage and importance in Europe. One of the key mentions about turmeric in western civilization was by Marco Polo (1280) – he says that he found a plant which has all qualities of saffron but is a root.

While turmeric has always been an important part of Ayurvedic system, western herbalist did not recognize its benefits till the late 20th century.

But by the mid 20th century, turmeric started gaining popularity in the western world too. Today there are numerous research studies and experiments done to identify its benefits.

Big pharma companies want to understand its unique composition so that they can make drugs on the same lines or use turmeric in some way.

Another industry which is using (or in many cases misusing) the name of turmeric is beauty products. It is not tough to find beauty creams and face wash mentioning that they have turmeric properties in it etc.

Thus in a nutshell from a herb only known to a small part of the world to one of the most sought after spice today, turmeric has come a long way.

Note: There is a lot of chemistry and related terms here, so just bear with me.

Turmeric is one of the species of genus Curcuma and botanically called Curcuma longa Linn. The genus comprises of “stemless” herbs with tuberous root stocks. These tubes are long and stalk-like.

Out of total thirty-five species present, turmeric or halad (Curcuma longa ) is the most famous member of genus Curcuma.

The species is native to tropical regions of South East Asia.

The presence of genus Curcuma species varies from region to region, for example, in India on can find up to six of them.

While turmeric is most popular, many other species of genus Curcuma are also known for their health benefits.

Turmeric is a tall annual herb of South East Asia. It needs lots of rainfall and temperatures between 20 and 30 degrees to grow.

The herb develops a large ovoid rootstock that bears stalkless cylindrical tubers with distinct orange colour from inside.

Turmeric leaves are also large (close to 2 feet!), its blade is slippery, oblong and lance like as it tapers along the base. In fact, The turmeric plant is identifiable by both its characteristic tuberous root and the leaves that extend upward from erect, thick stems arising from the root.

The parts of turmeric plants which are used are – rhizomes and tubers. Rhizomes can be considered as underground stems, these have roots below them and leaves growing above.

The interior of the turmeric root is hard, orange-yellow in colour. When eaten it colours our saliva yellow and has a warm sensation. 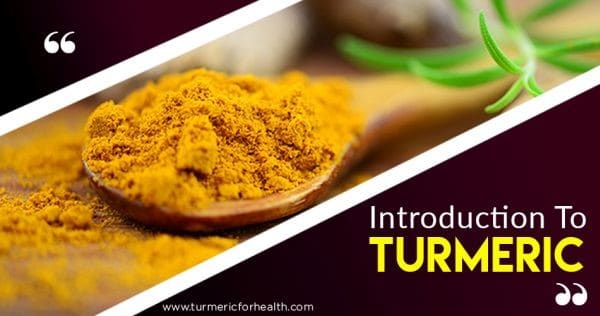 The composition of turmeric can vary slightly based on the region it is grown. A typical Indian turmeric has the following composition:

The root of the turmeric plant is composed of volatile oil (bitter in taste), starch, gum, calcium chloride, fibre and Cucurmin.

It is believed that the phenolic character of curcumin is responsible for its anti-oxidant properties.

32 thoughts on “Introduction & History of Turmeric : Know Your Golden Spice!”