Radiation can be defined as transmitted energy as waves or particles.

Most of the diseases and damage to the body are caused by ionizing radiation due to its higher energy content.

Exposure to radiations generally occurs during X-ray, CT scan, and radiotherapy or due to occupational environment or proximity to nuclear power plants.

How does Turmeric Help in Preventing Radiation Induced Illness?

Turmeric, an amazing spice widely used in Ayurvedic medicine since ancient times, has radioprotective effects and prevents the occurrence of various diseases induced by radiation therapy and other forms of radiation exposure.

Radiation exposure causes maximum damage due to the production of free radicals in excess.

Curcumin, the major active ingredient present in turmeric is known to have anti-oxidant properties and hence removes these excesses of free radicals.

These properties of turmeric and its ability to cure and reduce the disease symptoms associated with the amount of exposure to radiation will be discussed in details in the following sections.

Also, the recommended dosage and precautions will be discussed. 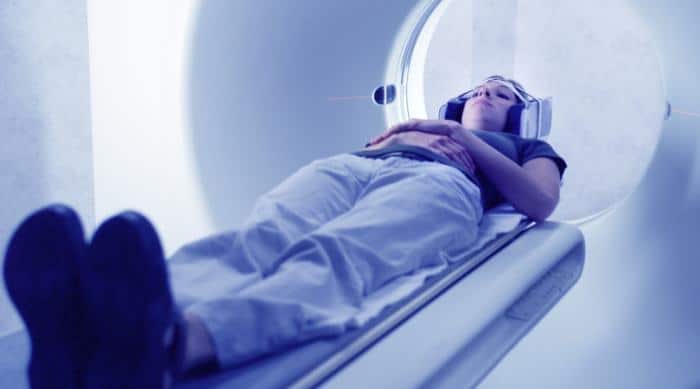 Mucositis is a disease characterized by inflammation of mucous membranes (membranes producing mucus for lubrication).

Radiation therapy of patients suffering from head and neck cancer has been seen to create a high risk of occurrence of oral mucositis [4].

Research has shown that gargling regularly with turmeric as mouthwash can mitigate and delay the symptoms of oral mucositis in such patients. [5]

Turmeric can reduce the severity of radiation induced oral mucositis.

Studies have shown that salivary glands are extremely sensitive to radiation. Hence, radiation therapy to head and neck cancer patients has a significant effect on the health of salivary glands, causing difficulty in swallowing, oral infection and other side effects. [6]

Research has shown that turmeric extract can exert radioprotective effects on the salivary glands by affecting several processes like the reduction of lipid peroxidation (a process that occurs due to oxidation of Poly-unsaturated fatty acids), lowering free radical production, etc. [7]

Radiation therapy in cancer patients often tends to affect the region surrounding the target tissue, leading to tissue damage in those cells adjoining the tumours.

This leads to radiodermatitis or radiation-induced skin damage. [8]

Research has shown that turmeric can play a major role in reducing the degree and severity of radiodermatitis in neck and head cancer patients. [9]

Turmeric reduces the risk and degree of radiation induced dermatitis.

Research has shown that UV radiation induces DNA damage in cells, genomic instability [10] and may even induce apoptosis or cell death.[11]

Studies have shown that curcumin, the major active ingredient present in turmeric, plays a major role in the prevention of apoptotic changes (changes leading to cell death) induced in cells due to UV radiation by removing the free radicals produced by UV radiation. [12]

Studies have shown that regular exposure to radiation is often the cause of genomic instability (a situation that makes the DNA unstable and prone to mutations), and may lead to uncontrolled cell growth, leading to cancers. [13]

Research has shown that curcumin not only protects the normal cells from radiation by reducing oxidative stress and inflammation but may also kill the tumour cells effectively by upregulating the genes responsible for cell death. [14]

It has been noticed that chronic irradiation by UV-B leads to skin damage causing pigmentation, wrinkling, changes in skin elasticity, etc. [15]

Research has shown that Turmeric extract has been shown to reduce this skin damage induced by UV-B irradiation by inhibiting the expression of genes that cause skin ageing. [16]

Research has shown that radiation exposure due to computed tomography (CT scan), cancer treatment, radiation accidents, etc. increases the risk of cardiovascular diseases depending on the amount of radiation exposed. [17]

Research has shown that turmeric can play a crucial role in the prevention of cardiovascular diseases such as abnormal heart rhythm, heart failures, etc. and maintain the proper health of the heart. [18][19]

Exposure to radiation has been shown to increase lipid peroxidation (a process that occurs due to oxidation of Poly-unsaturated fatty acids)  and associated disorders such as DNA damage, inflammation, oxidative stress (a situation caused by lowering of oxygen and excess of free radicals) related disorders. [20][21]

Research has shown that turmeric can play a crucial role in the inhibition of oxidative stress induced by radiation.[22]

Research has shown that turmeric can play a crucial role in the prevention of radiation-induced protein damage, by binding to the protein and preventing protein denaturation (the breakdown of secondary protein structure. [24]

Exposure to radiation proves to be carcinogenic for the mammary glands and induces the initiation of mammary tumorigenesis (tumours in mammary glands). [25]

Research has shown that turmeric has the ability to play a preventive role in the initiation of mammary tumorigenesis induced by radiation without causing any adverse side effects. [26]

Turmeric may play a chemopreventive role in the initiation of radiation induced mammary tumorigenesis.

There is not exact prescribed dosage of turmeric for the treatment of radiation-induced illness.

However, one can have a regular supply of turmeric as an ingredient in curries.

But turmeric, by itself, has negligible bioavailability, hence should be taken with a combination of black pepper. [27]

Although required dosage may vary from one person to another, an amount of 400-600 mg of turmeric powder three times a day should be sufficient to exert protective effects on the body.

Also, a person may have 1-3 g of the dried powdered root of turmeric a day to stay in proper health. [28]

Turmeric is not known to have any side effects other than blood thinning properties. Hence, patients with blood thinning medications should not have turmeric without the recommendations of a physician. [29]

Also, people allergic to turmeric and pregnant and lactating women should try to avoid turmeric.

Finally, people with complications in the gall bladder like gall bladder stones should consult the doctor before having turmeric. [30]

The best way to prevent radiation-induced diseases is to avoid continued and prolonged exposure to harmful radiations.

A thorough investigation and research into the role of turmeric in their prevention would go a long way in making turmeric a pivotal way of curing and treating these diseases.