Turmeric, also known as the golden spice has been used since centuries for both medicinal and edible purposes.

Apart from being used as flavouring and colouring ingredient in curry and other food items, it is known to cure common disorders like bruising, cold, cough, eye problems, skin problems, etc.

Recent research has proven its efficacy for treating complex ailments such as cancers, arthritis, and diabetes as well.

Tough considered safe, herbal and alternative medications including turmeric pose some risks of interactions with medications which could be exacerbated due to the inconsistencies in formulations and less regulated dosages.

Drugs that Interact With Turmeric

Turmeric has been known to interact with several types of drugs taken for common ailments such as diabetes, pain, blood clotting and many more.

The level of interactions may vary depending on the dosage of both the drug and the herb.

Depending on the interaction, turmeric may increase or decrease the effectiveness of the drug taken along with it.

The active ingredient in turmeric is known as curcumin and several supplements for curcumin purified out of turmeric are available in the market to increase the efficacy of turmeric.

Curcumin, just like turmeric can interact with the same drugs but on a much different level (higher or lower amount of interaction) as it is the concentrated form of the active ingredient found naturally in the herb.

The level of interactions may also vary depending on the form of turmeric taken, such as in the form of dried powder, fresh or dried cut root, extracts, tincture or as oil.

Though it is hypothesized to interact with a lot of drugs the actual evidence are available for the ones used for a small number of drugs used for specific conditions because turmeric is known to have a bigger interaction with those small numbers of drugs. 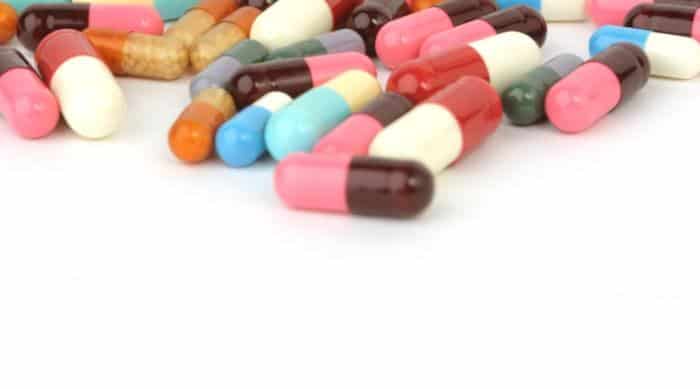 Several drugs are known to delay blood clotting. These drugs are majorly used for diseases such as high blood pressure and platelet problems. Turmeric is also one of the herbs that cause a delay in blood clotting.

Due to this property of this herb, if taken simultaneously with the drugs that delay clotting, turmeric can increase this effect.

Conversely, if taken along with the drugs that increase clotting (such as those used for low blood pressure), it may interfere with their effects.

It is important to take care of the consumption of turmeric at the same time as that of drugs that delay clotting because it may increase the risk of bleeding.

Also, the consumption of turmeric in large amounts is strictly advised against, at least 2 weeks before surgery because this may reduce the clotting and healing of the wounds created at the point of surgery.

This may also increase the risk of bleeding both internally and externally.

There are several medications available that can change the time of blood clotting, either increase or decrease it. Their classification is given below.

Blood thinners or anticoagulants are used to dissolve clots formed in the blood anywhere in the body. The effect of most of these drugs is lasting enough to prevent future clot formation for a long time.

There are three to four major classes of anticoagulants used for common blood clotting disorders.

Of these, the class of thienopyridine and dipyridamole is an anti-platelet drug which reduces the action of platelets (main facilitators of clotting).

Warfarin is the one given orally and all forms of heparin are injected during administration [1].

In case of a blood clotting problem or a disorder involving blood clots such as heart valve surgery, blood pressure ailments, congenital heart disorders and atrial fibrillation (abnormal heart rhythm), the doctor gives medications that most of the times, contain one or a combination of the above-mentioned anticoagulants [2].

List of brands of anticoagulants available: Examples of some of the drugs containing these anticoagulants are registered under a specific brand and the list is given below [3].

Drugs that promote clotting or antifibrinolytic medications are used in case of diseases like haemophilia or for injuries where blood loss is to be stopped.

Blood loss due to trauma, accidents and other such problems are impeded using antifibrinolytics.

Since turmeric is an anticoagulant, it may interfere with the action of antifibrinolytic drugs. It may not let the effect of such drugs show properly or as required leading to additional problems.

What it Means: Turmeric is known for its anticoagulant action or blood thinning properties. It can interact with anticoagulant drugs and increase their effect or interfere with the effects of coagulants or antifibrinolytic drugs that promote clotting [6].

Non-steroidal anti-inflammatory drugs or pain relievers are prescribed or usually over the counter pain management medications. These are taken to reduce headaches, sore muscles, arthritis, and other aches and pains.

Each person has a variable sensitivity to each type of pain reliever. Some people may respond to one type of medication more than the other.

There are majorly two types of pain relievers namely acetaminophen and NSAIDs. NSAIDs are the ones that are known to be interfered in action by turmeric and its compounds.

There are majorly 3 types of nonsteroidal anti-inflammatory drugs namely Aspirin, Ibuprofen, and naproxen. There might be other types of NSAIDs also but these three are most employed and effective.

Examples of the marketed NSAIDs

The NSAIDs are very popular and are marketed by different brand names given below. These contain one of the above-mentioned compounds as active ingredients.

Drugs with aspirin as major or minor ingredients

NSAIDs (particularly Aspirin) are very potent blood thinners and their interaction with turmeric or its derivatives is similar to that of anticoagulants.

Turmeric, being a blood thinner itself, may increase the effect of these medications if taken in large doses along with NSAIDs. This may lead to bleeding or delay in clot formation in case of an injury.

What it Means: NSAIDs, particularly aspirin act as blood thinners and so does turmeric. When taken together with NSAIDs, turmeric may increase the risk of bleeding [8].

Diabetes is one of the most common and problematic disorders in which the patients experience unbalanced blood glucose levels.

Diabetes is classified into two types, type 1 and type 2. Type 1, also known as juvenile diabetes requires insulin injections because the pancreas does not secrete enough insulin.

For type 1 diabetes, basically different types of insulin are given. Apart from that, medications containing amylinomimetic is given to some patients.

Amylinomimetic delays the stomach emptying and suppresses the production of glucagon in the blood so that the appetite is reduced.

Type 2 medications are of various types.

The drugs for diabetes may contain any one or a combination of the above-mentioned compounds. All these compounds supplement insulin, stimulate insulin secretion or regulate the blood glucose levels in the body by certain ways. [9],[10],[11].

Turmeric is known to lower blood glucose levels by metabolizing it. If a patient is on diabetes medications and also consumes turmeric in medicinal amounts, it might easily cause hypoglycemia.

It is therefore advised to consult a doctor before taking turmeric along with diabetes medications in large amounts [12].

What it Means: Turmeric reduces blood glucose levels, so do the diabetes medications. Taking them both simultaneously may lead to hypoglycaemia or sudden extreme lowering of glucose [13].

Acid reduction drugs are mainly used to treat acidity and heartburn. These drugs work either by acting on the gastric cells and reducing the production of acid or by buffering the acid through their alkaline nature.

One of the most popular drugs that reduce acid production in the stomach is H2 antagonists and proton pump inhibitors.

What it Means: Turmeric is known to enhance digestion by increase the acid production in the stomach which is the exact opposite of what acid reducing drugs do. Thus, it may interfere with the action of such drugs and may not allow them to work with their full efficiency [15].

Today, the idea of using herbal medications for the treatment of diseases is getting popular. This is because these therapies come with lesser side effects and long term healing effects as compared to synthetic drugs.

Turmeric is one of those herbs which are being used since centuries for the treatment of several simple and complex disorders. It has lesser-known side effects and potent healing properties.

One important thing to consider however, before taking turmeric or any herbal formulation is its interactions with other drugs.

Due to inconsistencies in formulations, dosages and lesser research done on them, these herbs can cause serious effects if taken without supervision or with proper care.

Turmeric, like others, is known to interact with several drugs used for important treatments such as for diabetes, blood clots, heartburn and pain management.

To avoid any side effects, it is thus advised to check with the healthcare provider if it’s safe to consume this herb in medicinal dosages along with the prescribed medications.

7 thoughts on “Turmeric and Drug Interactions”