Epilepsy is a brain-related disorder in which dogs experience sudden uncontrolled seizures.

A seizure is a physical attack when the dog may fall on his side, become stiff, salivate excessively, have a stiff jaw, jerking, muscle twitching etc. with or without loss of consciousness.

The younger the dog is, the more severe the epilepsy is likely to be.

Dogs with epilepsy can have repeated seizures more than once a week. Seizures last from few seconds to few minutes.

Status epilepticus is when the dog faces repeated seizures without recovering from the first.

Seizures occur as a result of an improper balance of chemicals in the brain due to which electrical activity in the brain is disturbed.

Idiopathic epilepsy is epilepsy that is for unknown reasons and could be genetic. Certain breeds such as Golden Retriever, Labrador retriever, Beagle, Shetland Sheepdog are prone to it. Other causative factors for seizures in dog include:

Treatment involves long term anti-epileptic and anti-convulsant medication like phenobarbitol. Other drugs that have been used to treat epilepsy in dogs include Gabapentin, Levetiracetam (Keppra), and Zonisamide.

It is best to consult a vet and discuss treatment options if your dog is diagnosed with epilepsy.

How does turmeric help in dog epilepsy?

Turmeric and its bioactive ingredient curcumin have an anti-epileptic and anti-seizure property which is useful in the treatment of epilepsy in humans as well as animals.

1. It has an anti-epileptogenic effect 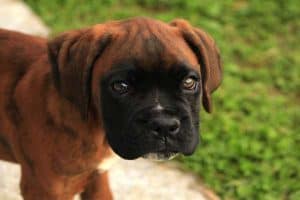 Epileptogenesis is a sequence of events that occur prior to a seizure.

A study reports that curcumin administration reduces the severity of recurrent seizures, protects brain function and can help in modifying epileptogenesis.

Status epilepticus , as mentioned previously, is a condition characterised by repeated seizures with no time for recovery.

Animal study shows that curcumin reduces the susceptibility to seizures, reduces oxidative damage in the brain and reduces loss and damage of brain cells.

What does this mean?
Animal studies provide evidence that curcumin has anti-epileptogenic effect and can aid in treatment of status epilepticus.

2. It can prevent convulsions and seizures

Curcumin’s antioxidant property contributes to its anti-convulsant nature.     It restores the level of antioxidant enzymes and reduces oxidative stress in the brain, thereby reducing progression to seizures.

An animal study demonstrated that oral supplementation of curcumin increases the level of antioxidant enzymes in the brain and this reduces the development of epilepsy.

Quite a number of studies show that curcumin increases seizure threshold, delays onset of seizures and reduces recurrence of seizures.

Bisabolene sesquiterpenoids, curcumol, and ar-turmerone are the compounds present in turmeric oil that proven to have anticonvulsant activity.

What does this mean?
Curcumin as an antioxidant increases the level of antioxidant enzymes and reduces oxidative damage in the brain; this indirectly reduces progression to epilepsy and reduces recurrence of seizures. Turmeric oil also possesses anti-convulsant activity.

3. It has neuroprotective property

Curcumin is a neuroprotective agent- it protects the brain and brain cells from damage and disease in humans.

Curcumin possesses anti-inflammatory, antioxidant and anti-protein aggregate properties that aid in protecting the brain from damage.

Damage of brain cells and toxicity is likely to occur in epilepsy. Research shows that curcumin’s antioxidant nature helps in protection from such damage.

Saha et al have demonstrated that curcumin in addition to reducing the onset of seizures also reduces oxidative stress and prevents the destruction of brain cells; thereby exerting its neuroprotective effect.

What does this mean?
Curcumin protects the brain cells and activity from damage and toxicity occurring in epilepsy. 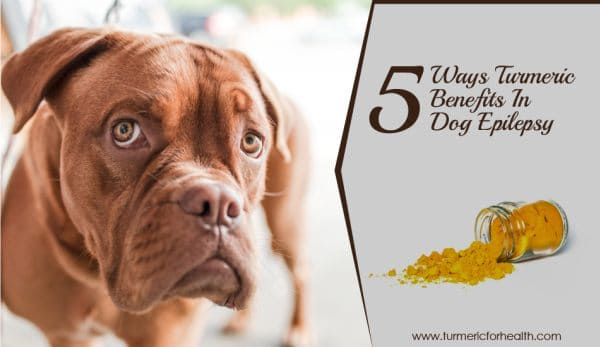 4. It works in synergy with anti-epileptic drugs

Curcumin is found to be as effective as valproate in reversing abnormalities occurring in epilepsy.

In an animal model of epilepsy, curcumin was administered in combination with anti-epileptic drugs: valproate, phenytoin, phenobarbitone, and carbamazepine.

Additionally, it also protected brain function like memory and learning, delayed onset of seizures and reduced oxidative stress. Curcumin did not interfere in the bioavailability of the drugs.

Also, curcumin can protect from side effects of anti-epileptic drugs such as liver toxicity, oxidative stress etc.

What does this mean?
Curcumin works in combination with anti-epileptic drugs that may be prescribed for your dog such as valproate, carbamazepine and phenobarbitone. It increases the therapeutic effect of the drugs and reduces the dosage of drugs required.
Also curcumin can protect from side effects of anti-epileptic drugs.

5. It can benefit from treating causes of epilepsy 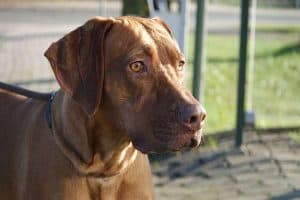 Curcumin, due to its anti-inflammatory and antioxidant effect can help reduce the health risks associated with brain injury.

Curcumin has the potential in preventing stroke.  Its anti-inflammatory and antioxidant effect helps in preventing brain injury in stroke.   It also normalizes abnormal blood sugar levels in humans.

Curcumin’s anti-inflammatory and antioxidant property aids in protecting liver and kidney from damage and diseases.

What does this mean?
Curcumin’s broad spectrum pharmacological properties can aid in mitigating the causes or risk factors of developing epilepsy.

Generally, most pet owners give their dogs 1-2 teaspoons of The Golden Paste daily and some say that the dog’s weight does not matter.

However, here is a table that will guide you with regards to the turmeric dosage based on your pet’s weight.

Based on the amount of turmeric you should be giving your pet, you can ascertain the dose of The Golden Paste.  Always go for good organic turmeric powder and not for capsules or pills. For a more detailed summary of dosage for dogs please read: Turmeric Dosage For Dogs-The Definitive Guide

The recipe for Golden Paste is as follows:

Add 1 ½ teaspoons of freshly ground black pepper and 70 ml coconut or olive oil. Cook till all ingredients are mixed well.
Based on the table above you can start with small doses (1/4 to ½ teaspoon based upon the dog’s weight) and slowly build the dose based on your pet’s tolerance. 1-2 teaspoon twice a day seems good.

This paste should be fine for 2 weeks when stored in the refrigerator.

In fact, you don’t need to make a separate Golden Paste for your pet. You can just use the same one that you make, and based on the dose suggested for your pet’s body weight you could feed him that amount.

However to make the paste more palatable and less spicy add boiling water to the paste and mix to form gravy-like consistency. Let this cooldown and then add it to your dog’s food.

Few things to be careful about when giving your pet on turmeric are:

Epilepsy in dogs can be controlled with constant treatment. Turmeric can serve as a complementary therapy by virtue of its anti-epileptic and anti-seizure property.

Remember to start your dog with small dose say about ½ teaspoon and slowly build to 1 teaspoon twice a day if it suits your dog. Consult a vet before starting your dog with turmeric.