Human body derives energy from the food, oxygen and other supplements introduced in the system. As by-product waste materials are produced which require to be eliminated from the body.

Kidneys play a vital role in excretion. These organs are found below the abdominal cavity and they excrete urine through the bladder.

Excretion is their prime function but the other activities that the kidneys influence are:

Just like every other organ, the kidney is susceptible to infection, damage or failure.

Kidney disorders can be present in an individual by birth such as polycystic kidney disease or can be acquired over time either due to an infection or as a result of another metabolic disease such as diabetes.

Humans can survive with just one kidney which makes it possible to transplant kidneys to those who require well functioning renal tissue.

Dialysis, medications, kidney transplant are a few of the treatment options available for kidney disorders.

Turmeric as an alternative therapy for kidney disorders

Turmeric is a famous Indian spice that has been revered in Traditional Chinese Medicine and Ayurveda as a herb to treat almost all disorders.

Curcuminoids are a class of compounds that are found in turmeric powder which impart the yellow color to the herb and are powerful antioxidants.

Curcumin is the principal curcuminoid that contributes to most of the turmeric’s pharmacological properties.

Compounds found in the volatile oil fraction of turmeric also possess therapeutic properties. The research studies mentioned below explain as to how turmeric can help treat kidney disorders. 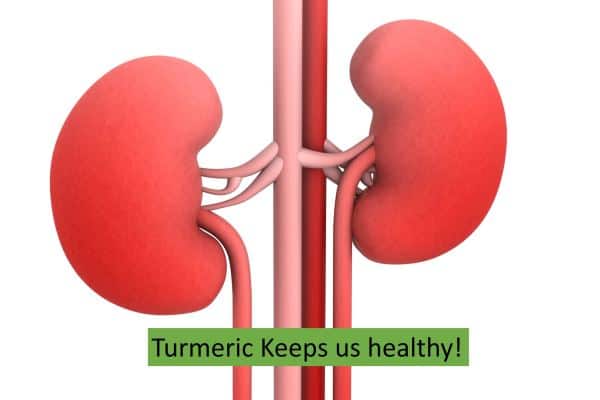 Inflammation plays a very important role in the progression of kidney disease leading to kidney failure. Inflammation is characterized by the production of pro-inflammatory chemicals and migration of white blood cells to the site of injury or infection.

An experimental study was conducted to evaluate the role of curcumin in treating inflammation in kidney failure. A rat model of chronic renal failure was prepared by surgical removal of kidneys in rats.

The animals were divided into three groups: untreated, curcumin-treated and enalapril-treated groups.

Enalapril is a drug used to treat blood pressure by modulating factors controlled by the kidney. It is also used to treat conditions caused by chronic renal failure.

Curcumin reduced the levels of TNF-alpha, prevented activation of NF-kappaB and also antagonized the TNF-alpha mediated decrease in PPARG.

What it means: Curcumin was found to be as effective as enalapril in treating chronic renal failure however unlike enalapril it could not improve blood pressure. However its low toxicity makes it a suitable drug to treat kidney disease alone or in combination with other drugs.

Nitrilotriacetate (NTA) is an iron chelating agent found in laundry detergents which causes toxicity and tumors in the kidney.

To prepare experimental conditions iron-NTA was injected in mice and it caused oxidative stress (imbalance between pro-oxidant and anti-oxidant agents), lipid peroxidation (oxidation of fats found in cell membrane by free radicals) and modification of DNA bases.

These mice were fed a diet supplemented with either curcumin or tetrahydrocurcumin(THU), a metabolite derived from curcumin.

Oxidative stress was controlled by the curcuminoids by scavenging free radical species and increasing the production of antioxidant enzymes.

THU controlled oxidative stress more effectively than curcumin and was also found to be better absorbed in the gastrointestinal tract than curcumin.

What it means: These findings suggest that antioxidant properties of curcuminoids make then potential chemopreventive agents against renal tumors.

Polycystic kidney disease is a genetic disorder that leads to the formation of multiple cysts in the kidney. These cysts are filled with fluid and they cause massive swelling of the kidney.

A study was organized to evaluate the inhibitory effect of curcumin on renal cyst formation.

Two different cell lines were used in the experiment. Curcumin was found to inhibit cyst development and at maximum dose it showed 62% inhibition.

Curcumin slowed down cyst enlargement in both the cell lines. Curcumin did not cause any toxicity or cell death at low concentrations.

Curcumin brought about these effects by influencing the production of proteins involved in cell growth.

What it means: These results indicate that curcumin can inhibit cyst formation and enlargement and thus prove to be a suitable drug to treat polycystic kidney disease.

Glomerulonephritis is a group of kidney diseases that affect the blood vessels or glomeruli that filter the blood.

It can be caused by improper responses from the immune system which cause inflammation in the glomeruli and damage other tissues of the kidney.

An immune complex is a unit in which antigen binds to antibody and sometimes this unit is too small in size to be eliminated from the system.

In such cases the immune complex causes inflammation.

An animal model was prepared to study the effectiveness of curcumin on immune complex-mediated glomerulonephritis.

Curcumin was provided at a dose of 30mg/kg and it reduced glomerulonephritis and improved kidney function.

It brought about a decrease in the concentration of complexes in the blood serum.

Also, mice treated with curcumin showed the significant reduction in immune cells and other factors which promote inflammation.

What it means: Overall the researchers concluded that curcumin could serve to be a therapeutic agent for immune complex mediated glomerulonephritis.

When glucose level in the blood rises above the capacity of the kidney to filter it, the renal function is disturbed and the volume of urine excreted increases.

This disease is marked by oxidative stress in renal tissue.

A research study was designed to study curcumin’s effect on renal function in experimentally induced diabetes in rats.

The rats were divided into four experimental groups in which two groups were treated with curcumin at a dose of 15 and 30 mg/kg for 2 weeks.

In 6 weeks, diabetic rats showed renal dysfunction by reduced elimination of wastes from the blood and oxidative stress was evidenced by the occurrence of lipid peroxidation and reduced activity of antioxidant enzymes.

What it means: Curcumin significantly attenuated both renal dysfunction and oxidative stress, thereby presenting its potential to treat diabetic nephropathy.

The kidney stone is an aggregate of minerals found in the kidney. If small in size, they pass out of the body through urine but large kidney stones can block the ureter and cause pain.

Curcumin in combination with a chemical isolated from a natural source is reported to prevent and treat kidney stones. Calcium is a common component found in kidney stones.

Experimental conditions were designed to induce kidney stones in rats. Elevated levels of calcium and oxalate were seen in the urine which was prevented by curcumin treatment (60mg/kg).

Large kidney stones were found in the tissue of the group that was untreated while the curcumin-treated group showed fewer and smaller crystals.

Also, renal function was improved by curcumin treatment and no changes in kidney tissue were reported with respect to the treated group.

The antioxidant property of curcumin was found to reduce oxidative stress and lipid peroxidation caused by calcium kidney stones.

However, a clinical trial’s result suggests that ingestion of turmeric supplements can lead to kidney stones. 11 healthy volunteers of the age group 21 to 38 years participated in the 8 week study.

They were asked to consume supplemental doses of cinnamon and turmeric which provided 55mg of oxalate per day.

It was observed that when compared to cinnamon (6%), ingestion of turmeric supplements (91%) lead to increased calcium oxalate excretion.

What it means: This suggests that consumption of turmeric supplements can increase risk of kidney stone development in susceptible individuals.

It would be essential to note that this result pertains to particular brand of turmeric supplements and is also not applicable to a dietary source of turmeric or standardized powder of curcumin.

100 patients on dialysis and suffering from turmeric pruritis were recruited for this study. They were assigned to turmeric or placebo groups.

Biochemical parameters like C- reactive protein and the pruritis score was recorded before and after the study and compared.

No side effects due to turmeric use were observed throughout the study period.

Turmeric is a strong anti-inflammatory agent. It reduces the level of inflammatory chemicals being produced in the body and prevents immune cells from migrating to the site of inflammation.

Nuclear factor- kappaB and tumor necrosis factor are key players in the inflammatory process and they regulate inflammation. Turmeric, especially curcumin inhibits the activity of these proteins.

As the study demonstrated, turmeric lowered levels of C reactive protein (an inflammatory biomarker) and reduced systemic inflammation and pruritis.

Turmeric is effective in decreasing C-reactive protein and uremic pruritis in end-stage renal disease patients and does not cause any side effects.

Turmeric can be incorporated in the diet on a regular basis as no side effects have been reported. Turmeric supplements are available in the form of capsules containing powder, tincture or fluid extracts.

However it is safer to consult a health care provider regarding a dose suitable to one’s condition and body.

No adverse effects have been reported on the consumption of turmeric in a regular diet.

However, turmeric supplements should be consumed with caution to avoid allergic reactions and risks posed by inappropriate dosage.

Due to its blood thinning property, turmeric supplements should be discontinued 15 days prior to the treatment.

Turmeric supplements should be taken with caution in case of gall bladder disorders, bile passage obstructions and gastrointestinal disorders.

Turmeric is an amazing health promoter. Research has shown more than 600 potential health benefits and counting. Research studies have indicated that turmeric can be of help in various kidney disorders primarily due to its anti-inflammatory and anti-oxidation properties and without the usual side effects.

76 thoughts on “Turmeric – A Powerful Weapon Against Kidney Disorders”