Laminitis is inflammation of the laminae.

The blood supply to the laminae is hampered which results in pain, inflammation, and swelling.

The laminae support the pedal bone in the hoof which carries the animal’s weight.

When the damage exceeds, the pedal bone sinks and rotates and at times it sinks far enough to protrude out of the foot.

This can lead to lameness.

The causative factors behind laminitis include:

Change in diet and administration of anti-inflammatory drugs are a part of the therapy. Hoof care is important.

Laminitis is a painful condition and prevention is the best measure.

This article is very comprehensive and long, please feel free to use the Table of Contents below to jump to the relevant section in the article.

5 Does Ways Turmeric help in Laminitis?

Turmeric can help in Laminitis in various ways. Turmeric’s herbal properties can aid in the reduction of inflammation and healing of horses’ hoof. Turmeric is one of the best natural painkillers with no side effects and thus can help in pain associated with Laminitis. It’s anti-microbial properties also help in fighting the infection.

Curcumin, the bioactive ingredient of turmeric, is a potent anti-inflammatory agent.

Its anti-inflammatory property is mediated by its ability to modulate the activity of enzymes such as COX, LOX, and iNOS which play a very important role in inflammation.

Curcumin also inhibits the activity of other inflammatory mediators such as prostaglandins, leukotrienes, tumor necrosis factor and interleukins which give rise to redness, pain, swelling at the site of inflammation.

One of the major ways, curcumin inhibits inflammation is by inhibiting the activity of nuclear factor-kappaB, a master protein that controls the inflammatory process. It also increases the level of anti-inflammatory enzymes and proteins and reduces the activation of inflammatory cells.

Non-steroidal anti-inflammatory drugs and steroids are prescribed to help manage pain in laminitis. They act on inflammatory enzymes such as COX and LOX in order to inhibit pain and inflammation.

As mentioned previously, curcumin also acts on the same enzymes in order to inhibit pain but unlike these medications, it does not cause gastric erosion.

Phenylbutazone or bute is a common painkiller prescribe to horses for managing pain. Research shows that curcumin works better than phenylbutazone as a painkiller and anti-inflammatory agent.

Curcumin is found to outperform other painkillers like diclofenac sodium and indomethacin. Celecoxib is a non-steroidal anti-inflammatory drug that is prescribed to manage pain and inflammation in arthritis in humans and horses.

A study shows that curcumin works in a combination of celecoxib in reducing inflammation and can reduce the dose of celecoxib required for treatment.

What does this mean?
Curcumin is more effective in reducing pain than painkillers like phenylbutazone, diclofenac sodium, indomethacin. It works in combination with other painkillers and reduces the dose of painkillers required. It also does not cause any side effects. 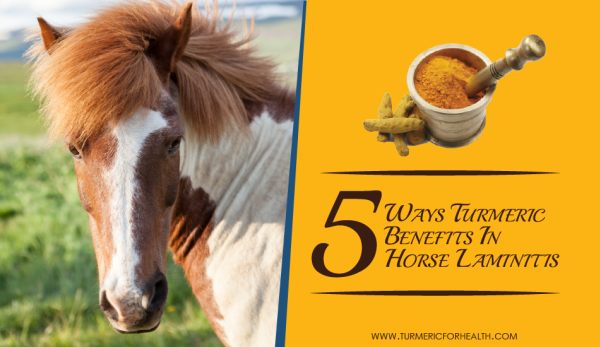 3. It is an anti-microbial agent

Chronic laminitis is associated with an increased risk of bacterial infection. Bacterial species such as Staphylococcus, E.coli are involved.

Curcumin has broad spectrum anti-microbial activity- it inhibits the growth of various fungi, viruses, and bacteria. It exerts anti-bacterial activity against Staphylococcus and E.coli.

Research studies prove that anti-microbial activity of turmeric is comparable to antibiotics such as ampicillin, amoxicillin etc. Turmeric is found to be effective against multidrug-resistant strains of bacteria.

What does this mean?
Curcumin’s broad spectrum anti-microbial action can help in treating infections that occur in chronic laminitis.

4. It can improve metabolic health

Equine metabolic syndrome is a cluster condition pertaining to metabolic health and inability to digest dietary carbohydrate. Obesity and improper functioning of insulin can predispose horses to laminitis.

Though not investigated in relation to the animal metabolic syndrome, quite some animal studies show that curcumin has an insulin-sensitizing effect and can possibly aid in the treatment of insulin resistance that contributes to laminitis.

What does this mean?
Curcumin improves metabolic health and obesity related parameters which are causative factors of laminitis.

5. It can restore gut flora

Increased consumption of carbohydrate or sugar-rich grass leads to the growth of certain bacteria in the intestine such as lactic acid bacteria.

The intestine consists of good bacteria too which help in digestion. But increased consumption of carbohydrate leads to excessive growth of unhealthy bacteria in horses.

These then produce toxins which travel via the blood and interfere with the circulation at the laminae and lead to inflammation.

Curcumin, as well as turmeric oil, have gastroprotective activity. Studies suggest that dietary curcumin can improve bacterial richness. This can be effective in re-establishing gut microflora in horses affected by laminitis.

What does this mean?
Increased dietary carbohydrate and disturbed gut microflora are causative factors for laminitis. Curcumin and turmeric has gastroprotective property. They can aid in replenishing a healthy gut microbe population.

There is no set dose of turmeric for horses with laminitis. Most owners start with 1 teaspoon of turmeric twice a day.

In fact, you can use the same Golden Paste that you consume for your horse.

If you plan to prepare the paste for every feed then here is how to do it:

Take about 125 ml turmeric powder and add this with 250 ml water to a pan. Cook on low flame till you make a good paste.

Add the water slowly such that the paste is neither watery nor thick. You could add more turmeric powder if the paste is watery and more water if it is too thick.

Then add about 1 1/2 (7.5ml) teaspoon of freshly ground black pepper and 70 ml of oil. You could use coconut or olive or flaxseed oil. Keep stirring till all the ingredients are mixed properly. Let the mixture cool down.

Add around 1 teaspoon to your horses feed once a day and add a lot of water to the feed to mellow down the spicy taste. This is just a start. Slowly increase it to twice a day based on how it suits your horse.

Avoid using oil if the feed is already rich in fats. Also, mix a lot of water in the feed while adding turmeric as horses find this combination more palatable.

Turmeric can also help in other horse health issues  –

There are no such side effects of feeding turmeric to horses. Initially slight gastric discomfort and diarrhea could occur. In that case, it is advisable to reduce the dose.

Also, avoid turmeric prior to surgical procedures to avoid the risk of bleeding.

Turmeric finds its use as herbal medicine in Trinidad and it is said to flush out the uterus. This could have implications for equine gestation and postpartum health.

Laminitis is a painful condition which if not prevented or treated in initial stages can result in lameness and severe damage.

Turmeric can serve as supportive therapy and help reduce pain, inflammation, and sepsis in laminitis.