However, due to turmeric’s ability to interfere with the process of drug metabolism, as a precaution, a gap of 3-4 is recommended when taking turmeric or curcumin in supplemental doses.

Turmeric Benefits along with Antibiotics

Here are some scientifically proven benefits of taking turmeric with antibiotics. 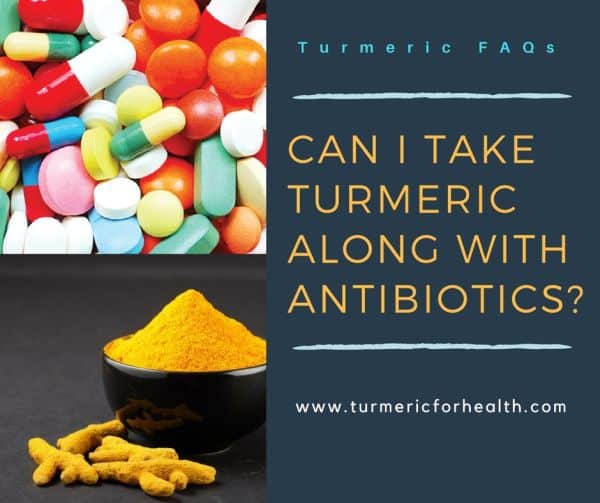 They have demonstrated their efficacy in inhibiting the growth of various pathogenic species of microbes that cause infections and deadly diseases in humans. [1]

Thus, turmeric could assist in the prevention and treatment of several microbial infections.

2. Turmeric may be better than antibiotics

Depending on the type of bacteria, turmeric and curcumin may be better at inhibiting bacterial growth compared to commonly used antibiotics like amoxicillin, ampicillin, pantoprazole and metronidazole. [5] [6]

Bacteria which can biofilms are able to withstand severe conditions and antibiotics. These strains tend to develop antibiotic resistance and thus become difficult to treat, even by large antibiotic doses.

Turmeric can inhibit the formation of biofilms and decrease motility of these bacteria, which makes it a useful agent against antibiotic-resistant strains. [7] [8]

Studies have reported its potential to treat several antibiotics (including methicillin, carbapenem and vancomycin) and multi-drug resistant bacteria. [9] [10] [11] [12] [13]

It could also reverse the resistance of bacteria to antibiotics. Treatment of such microbes with curcumin can significantly disrupt the cell wall, membrane and cytoplasm contents, making it more vulnerable to antibiotics. [14]

Thus, its combination with antibiotics may help in preventing and treating bacterial infections in a better manner.

3. Turmeric is safer than antibiotics

Antibiotic treatment poses a risk of several side effects including gastrointestinal symptoms, diarrhoea and allergic reactions.

Turmeric, on the other hand, is entirely well-tolerated, has no serious side effects and safe to use even at high concentrations. [15]

4. Turmeric alleviates side effects of antibiotics

Prolonged or overuse of antibiotics may damage organs like liver and kidneys and result in hepatotoxicity, renal toxicity, and neurotoxicity.

Turmeric is a potent antioxidant which can scavenge free radicals and reduce oxidative stress in these organs.

Several studies and clinical trials have administered turmeric with antibiotics only to find an increased anti-bacterial effect. [22]

In one such study, curcumin used to treat methicillin-resistant Staphylococcus aureus helped in lowering the concentrations of antibiotics like oxacillin, ampicillin, ciprofloxacin, and norfloxacin. It was also proposed that curcumin, in combination with antibiotics may assist in developing a better treatment measure for resistant strains. [23]

In other studies, curcumin has shown synergistic effects with other antibiotics including, but not limited to amikacin, gentamicin, cefepime, cefaclor, cefodizime, and cefotaxime. [24] [25] [26]

Thus combining turmeric with antibiotic treatment may help lower dose of medicines and their possible side effects.

However, more extensive studies and trials need to be conducted to ascertain the safety of turmeric with antibiotics at appropriate dosage levels.

Piperine, being a bioenhancer can also improve drug absorption. Over a more extended period, this could also increase the side effects, toxicity and damage caused by these drugs. [27]

Curcumin inhibits the Cytochrome P450 enzyme and P-glycoprotein, both of which play a vital role in drug metabolism in the intestines. Thus, it could alter the absorption and therapeutic effects of the drug. [28]

Thus, turmeric, concomitantly taken with antibiotics could affect drug pharmacokinetics. However, larger human studies are needed to prove the significance of these effects. [29]

Therefore, when taking large doses of turmeric or curcumin in the form of supplements or golden paste along with antibiotics, it is better to maintain a gap of 3-4 hours in between.

If you have decided to take turmeric powder, know its ideal dosage here>

It is important to buy a good turmeric brand if you already know one, geat otherwise you can check out the list of recommended brands from our side

If you want to take supplements, here are the main types of supplement types and best supplement brands. Make sure you choose wisely.

Have you used turmeric/ curcumin along with antibiotics? If yes, do share your experience with others by commenting below, it would be of great help!

1 thought on “Can I take Turmeric / Curcumin Along with Antibiotics?”