Candida albicans is the specific fungus responsible for vaginitis, the most common type of yeast infection. Yeast in the human body is present in moist areas like the vagina or mouth.

Vaginitis is characterized by symptoms like extreme itchiness, vaginal irritation, and discharge or burning sensation during intercourse or urination.

Yeast infections may be caused due to pregnancy, impaired immune system, overuse of antibiotics, uncontrolled diabetes or inadequate vaginal lubrication.

Yeast infections caused by the Candida albicans fungus respond well to conventional treatments. Other Candida types, on the other hand, are often hard to treat and will require aggressive treatment.

Although women suffer the most from yeast infections, men may also contract genital yeast infection due to unprotected sexual intercourse with an infected partner.

Other causes of this infection in men include impaired immune system or diabetes. In men, symptoms include rash, burning or itching around the penis and it responds well to OTC fungal treatment.

4 Awesome Benefits of Turmeric in Candida

The antimicrobial action of curcumin has been seen to be effective against a diversity of microorganisms such as bacteria, virus as well as fungus. The other biological activities of curcumin can also be useful against the other aspects of the infection like antibiotic resistance.

1. It has anti-fungal activity

Candida infection is a consequence of the overgrowth of the fungus. The infection takes place due to the inability of the body’s immune system to fight against the pathogen invasion.

Other factors such as pH, metabolic adaptations and environmental stress responses in the cell also contribute to the growth of the fungus.

Curcumin is long known for its antimicrobial activity. Studies have highlighted its anti-fungal action against many common fungal pathogens, including Candida.

Its efficacy is known against various strains of Candida, particularly Candida albicans.

There are several mechanisms for the antifungal activity of curcumin against this fungus has been elucidated.

One of the mechanisms is found out to be the disruption of the plasma membrane of the fungus by curcumin, which prevents growth.

It has also been found that curcumin downregulates the expression of the proteins such as calcineurin that are involved in the synthesis and maintenance of the cell wall of the fungus. This leads to the destruction of the cell wall and thus kills the fungal cell.

Another anti-fungal mechanism of curcumin is mediated by its ability to induce reactive oxygen species generation in the fungal cells. This leads to elevation of oxidative stress which in turn induces apoptosis (cell death) in the cells.

It also targets the gene TUP-1 (involved in DNA synthesis) which prevents the division of the cells and thus, prevents the fungal growth.

In the case of vaginal candidiasis, a curcumin formulation has been found to be effective in the treatment of the infection.

Curcumin has also been found to reduce the intensity of oropharyngeal candidiasis (candida of mouth and pharynx) in a disease model.

What does it mean?
Curcumin can be used to treat the infections caused by the fungus Candida. Its anti-fungal activity kills the fungal cells and also prevents their proliferation.

2. It destroys Candida bio-film and sensitizes it to anti-fungal drugs

Bio-film is the protective covering of pathogens formed the cellular and non-cellular materials, which is closely associated with the drug resistance. The biofilm is composed of extracellular materials like mannose and glucose.

These extracellular materials are known to interact with the antibiotics to promote the antibiotic-resistance.
Curcumin has been found to be active against the bio-films of various pathogens.

In a study, different plant polyphenols were examined for their anti-bio-film activities against Candida. Curcumin was found to be the most active among all.

It could destroy the bio-film by inhibiting the cell adhesion, biofilm growth and gene expression of various factors involved in the development of the film.

Curcumin has also been found to sensitize the multidrug-resistant Candida albicans to the anti-fungal drug, fluconazole. It could reverse the resistance of the fungus to fulconazole significantly.

The combination of anti-fungal drugs with curcumin leads to the generation of reactive oxygen species in the Candida cells leading to their death. This synergistic activity reverses the reduced sensitivity of the fungus to the anti-fungal drugs.

What does it mean?
Curcumin can be used to combat the drug resistant Candida. The ability of curcumin to destroy the fungal bio-film and sensitize the drug-resistant fungus to the anti-fungal drugs helps in this. 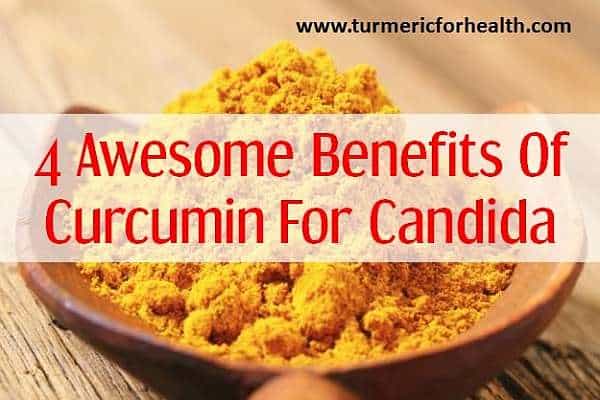 3. Curcumin helps in the photodynamic therapy (PDT) against Candida

Photodynamic therapy (PDT) is a therapeutic process used against microorganisms and cancer lesions.

In this therapy, a photosensitizer compound (a dye that can absorb light and transfer the energy to other molecules) is activated by visible light exposure and leads to many chemical reactions that damage the target cells.

These chemical reactions include the generation of reactive oxygen species or other such reactive compounds. This therapy is employed against a number of pathogens, including Candida and found to be an effective treatment method.

The photosensitizer compounds commonly used in the PDT are the non-toxic dyes like methylene blue and toluidine blue O. Plant-derived dyes like porphyrins, phthalocyanins, curcumin, etc are also employed in this therapy.

Curcumin is often employed as a photosensitizer compound in the PDT. Its use in the PDT has been found to be very effective against many Candida species.

Curcumin damages the DNA of the fungus by generating reactive oxygen species (singlet oxygen) upon activation by the light.

It also has significant photodynamic activity against the bio-film of Candida. It inactivates the bio-film by decreasing the metabolic activity of the fungi involved and reducing the biomass of the film.

In a model of oral candidiasis, the efficacy of curcumin in PDT was highlighted. Curcumin proved to be highly effective against the fungus and reduced their colony counts significantly. Moreover, it had no harmful effect on the surrounding healthy tissues.

What does it mean?
The application of curcumin in the photodynamic therapy (PDT) can be very effective against Candida infections. Curcumin is highly efficacious in damaging the fungal cells and destroying their bio-films, without harming the surrounding healthy tissues.

Candida infection is emerging as a huge concern in the immune-compromised patients, such as patients of cancer, AIDS, organ transplant, etc.

Curcumin has the potential to be such an alternative.

In cancer patients with invasive Candida infection, it has been analyzed that curcumin can be used effectively to treat the complications caused by the fungal infection and reduced the mortality caused.

Curcumin has also been found to inhibit adhesion of the Candida cells from AIDS patients, on the host tissue. This indicates its potential in therapeutic use in immune-compromised patients.

Moreover, curcumin being an immune-booster can be useful in fighting the fungal infection in the immune-compromised patients by modulating the immune responses.

What does it mean?
It means curcumin can be used to treat the Candida infections in the immune-compromised patients such as those of cancer, AIDS etc. Curcumin can also boost the immune system of the body in these patients to be equipped to fight the infection.

There is no recommended dosage for children. Remember, this is not necessarily dosage for yeast / fungal infection.

As I have always maintained, it is better to include turmeric in your regular diet rather than supplements. Enjoy its aroma and color in your food!

Turmeric used as a spice in food is safe for everyone.

When taking turmeric supplements, always stick to the recommended dose, for otherwise, you could develop side effects like nausea, diarrhea, dizziness or indigestion. Pregnant and breastfeeding women and diabetes patients are advised to avoid turmeric supplements.

Always consult your doctor when taking turmeric supplements for they could interact adversely with several drugs – e.g. anti-platelet medications.

12 thoughts on “How Turmeric Benefits in Candida”