Vaginitis is the inflammation of the vagina.

The vagina is the muscular canal from the cervix to the outside of the body.

Vaginitis is a very common condition and is characterized by discharge, itching, swelling, and pain. It is generally caused by infection.

The most common types of vaginitis include:

Oral/topical antibiotics and antimicrobial creams are prescribed to treat this condition. Change in diet and hygiene habits is also recommended.

In this article, we shall review as to how turmeric can aid in treating vaginitis.

5 Benefits of turmeric for vaginitis

Turmeric is a herbaceous plant native to India and Asia. It has been used as a coloring spice to add flavor to various dishes and it is also known for its medicinal value.

The volatile oil of turmeric is about 1.5 -6.0% and is composed of a variety of sesquiterpenes.

Most important for the aroma are turmerone, ar-turmerone, and zingiberene. The coloring matter comprises mainly of a group of compounds-curcuminoids.

The principal bioactive compound of turmeric is curcumin and several studies have reported the broad-spectrum antimicrobial activity of curcumin including antibacterial, antiviral, antifungal and antimalarial activities.

It reduces the production of inflammation-causing chemicals, downregulates the activity of genes involved in inflammation and increases the level of anti-inflammatory chemicals produced in the body.

A clinical study was conducted to evaluate the efficacy of V-Gel, a polyherbal vaginal gel in women diagnosed with clinical evidence of vaginitis.

V-Gel consists of various herbs with anti-inflammatory and anti-microbial properties, one of them being turmeric. 38 women falling in the age group of 22-35 years participated in this study.

The patients were treated for 2 weeks with V-Gel.

Symptoms reduced drastically within 1 week of treatment and on completion of 2 weeks treatment patients experienced relief from all symptoms and tests conducted confirmed the absence of infection.

Tumeric’s anti-inflammatory can aid in treating inflammation in vaginitis. However local application of turmeric as a crean or gel formulation is required for that purpose.

2. Curcumin is a phytoestrogen

Curcumin is a proven phytoestrogen- plant source of estrogen.

Research shows that curcumin is not a potent phytoestrogen but its use is implicated in various conditions where estrogen plays a role in proliferation. Curcumin is also suggested as a dietary antioxidant for the hormonal imbalances occurring in menopause.

This could be a possible way by which curcumin/ turmeric could help in vaginitis but adequate research is required to prove this.

3. It acts against vaginal infections

A private research institute in New Delhi has developed a polyherbal cream with curcumin as one of its prime constituents.

This cream prevents the growth of microbes that cause gonorrhoea, some of them being resistant to antibiotics.

It also has a significant inhibitory action against drug-resistant Candida species and these specimens were isolated from women suffering from vulvovaginal candidiasis.

Trichomonosis is a disease caused by the protozoan parasite Trichomonas vaginalis.

It is the most common curable sexually transmitted disease with 174 million cases per year worldwide.

Since the strains are developing a resistance to standard treatment, curcumin has been tested as an alternative.

Curcumin was shown to be highly effective against T. vaginalis.

In all strains tested, a 100 % eradication of all microbial cells within 24 h was reached at a concentration of 400 µg/ml curcumin.

Curcumin’s anti-microbial properties help in fighting vaginal infections that could cause vaginitis. 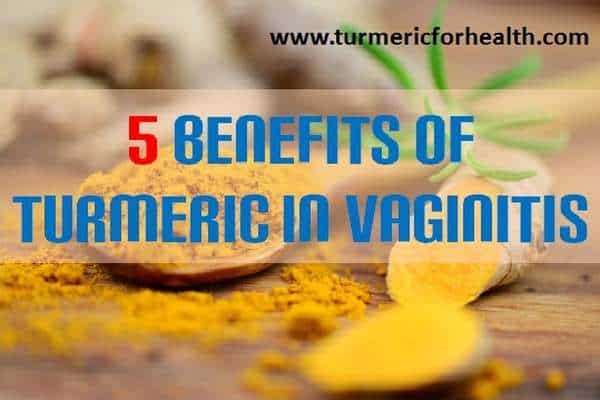 4. Curcumin potentiates the action of antibiotics

If the infection is identified as the cause of vaginitis, the commonly prescribed antibiotics include metronidazole, fluconazole, and clindamycin.

Sharma et al report that curcumin can reverse multidrug resistance in Candida species and by this property it can promote the fungicidal activity of conventional anti-fungal drugs.

Study proves that curcumin can act synergistically with fluconazole, thereby increasing the sensitivity of drug-resistant Candida species to antibiotics.

Curcumin strengthens the activity of antibiotics that are used to treat vaginal infections.

5. Curcumin serves as the anti-microbial contraceptive

Research conducted by West Virginia University has reported that curcumin is a potential non- steroidal contraceptive with spermicidal and anti-microbial activity.

As a part of the study, the effect of different concentrations of curcumin on the growth of various strains of bacteria and yeast, that is likely to cause vaginal infections, was tested.

Curcumin was found to inhibit the growth of all bacteria and yeast at concentrations ranging from 100-500 μM. Its microbicidal activities were further enhanced by photosensitization.

Research suggests that local or intravaginal application of curcumin can exert microbicidal and spermicidal properties.

The best way of using turmeric for treating vaginitis is to include it in your diet. You can make the Golden Paste and add a dollop of it to your salad, soup or rice preparation. Turmeric Milk on a daily basis should help.

You can browse the website for a couple of more recipes with turmeric.  Check this link for a list of good brands of turmeric powder and supplements.

However, I would still suggest good quality turmeric powder or even raw turmeric over curcumin supplements for vaginitis.

In case of irritation and itching, topical turmeric/curcumin cream should help. For more details on dosage check out this resource.

No adverse effects have been reported on the consumption of turmeric in a regular diet.

However, turmeric supplements should be consumed with caution to avoid allergic reactions and risks posed by inappropriate dosage.

Turmeric’s anti-inflammatory and anti-microbial properties are of therapeutic purpose in vaginitis. This inexpensive herbal remedy can serve as a cure for vaginitis and also act in synergy with conventional treatment.

Turmeric and Radiation-Induced Illness: How it Can Help

Can Turmeric Help in Proctitis?

Proctitis is an inflammatory disorder of the rectum that causes bleeding and discharge of mucus and pus from that area. It is caused by several reasons such as dysfunctioning of the immune system, contact of the rectal area with harmful substances, infection or sexually transmitted diseases. Proctitis is usually a secondary disorder; a symptom of a more severe problem; for instance, autoimmune disorders like ulcerative colitis and Crohn’s disease or […]

We are a participant in the Amazon Services LLC Associates Program, an affiliate advertising program designed to provide a means for sites to earn advertising fees by advertising and linking to Amazon.com.
error: