Turmeric is regarded as a ‘golden herb’ in Ayurveda due to its various pharmacological properties such as anti-inflammatory, anti-oxidant, anti-microbial, anti-cancer, immunomodulatory, etc.

Two groups of constituents that confer these properties to the spice are curcuminoids and volatile oil.

Curcumin is medicinally the most important constituent. Volatile oil also has therapeutic properties and is responsible for the strong aroma. 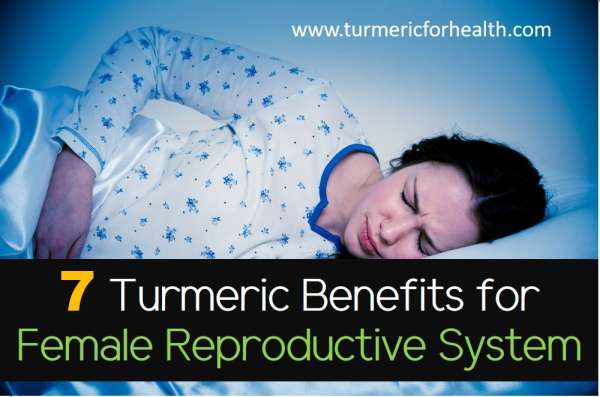 Estrogen is one of the female sex hormones that are essential for the menstrual cycle and fertility of females. Turmeric has proven estrogenic activity- it mimics the activity of the hormone.

Curcumin acts as a weak phytoestrogen- estrogen obtained from a plant source. This could be suggestive of its therapeutic role in female reproductive disorders.

Turmeric is known to decrease intensity and pain experienced during periods. I searched this over the internet and found out that this is a very common problem today with so many females.

Turmeric’s antispasmodic action can help with menstrual cramps. While there are many medicines available today for this problem, but using turmeric can provide a great natural choice.

Scientists in Thailand have investigated the antispasmodic effect of curcuminoids on uterine contractions.

Curcuminoids, at a concentration of 8microgram/ml and 16 micrograms/ml, aided in reducing the force and frequency of induced contractions in smooth muscles of rat uterus.

Back pain and overall body ache are the common complaints associated with menstrual cycles. Women generally resort to over the counter available painkillers.

The use of painkillers or non-steroidal anti-inflammatory drugs (NSAIDS) for the long term can pose side effects such as gastrointestinal upset, gastritis, acidity, kidney failure, etc.

As a herbal alternative to painkillers, turmeric powder can be consumed within the limit of 400-600mg thrice a day.

Curcumin is a strong anti-inflammatory agent and it combats pain in a similar way as painkillers but does not cause adverse effects.

Turmeric is one herb which brings back uterus back in proper shape and functioning. Some also believe that turmeric also helps in balancing hormones which in turn are responsible for breakouts, irregular periods, etc.

Turmeric has the property of being an emmenagogue. Emmenagogues are herbs which stimulate blood flow in the pelvic area and uterus, also some of them stimulate menstruation. Turmeric purifies and moves stagnant blood which normalizes menstruation.

Another benefit of turmeric arises from the fact that it is a mild and supportive uterine stimulant.

Uterine stimulants (uterotonics) are medications given to cause a woman’s uterus to contract, or to increase the frequency and intensity of the contractions.

I must add that in some situations this can also be a problem. Thus it is always advised for pregnant and lactating mothers to take turmeric after consultation with their doctor.

Leukorrhea is a term used to denote thick, whitish or yellowish vaginal discharge. Again, when I researched over the internet, it also seemed to be a big problem these days.

It is believed to be caused due to various factors (the main one being an imbalance of hormones) and can continue for years. Turmeric can prove to be helpful here.

Take 10 gms of turmeric and boil that in water. Let it cool down and then it as a douche 3-4 times a day. It is believed to provide long-term relief.

Endometriosis is a disease in which endometrium- cells lining the uterus, grows outside the uterine cavity. This disease affects around 15% of women of reproductive age and leads to infertility.

The exact cause behind the occurrence of the disease is not yet understood but oxidative stress and hormonal imbalance are said to play important roles in its mediation.

Oxidative stress is an imbalance between prooxidants and natural antioxidant defenses of the body.

Prooxidants are generated in various biochemical pathways of the body including processes related to the development of the female reproductive system.

Yet when produced in excess these agents can cause oxidative stress and lead to a proliferation of diseases.

Curcumin is reported to inhibit the growth of endometrial cells by modulating the secretion of estrogen. Curcumin’s potent antioxidant activity is also exploited to serve as an aid against oxidative stress mediated infertility in the endometrium.

Toxic shock syndrome can also occur with skin infections, burns, and after surgery. 1/3 of the toxic shock cases involve women under 19. High fever and vomiting during menstruation, rash, and low blood pressure are few of the symptoms.

A study conducted in Minnesota, USA investigated the effect of curcumin on mTss in a rabbit model.

Curcumin was found to be non-toxic to cells lining the vagina and it not only inhibited the infection but also reduced the inflammation caused by it.

This effect was deemed to be caused due to curcumin’s anti-inflammatory and anti-microbial properties. Curcumin reduced toxic shock syndrome induced lethality by 60% in rabbits.

Results of this experimental study suggested the use of curcumin within therapeutic range safe for topical vaginal application. Yet no such ointment has been formulated for this purpose, hence I would refrain from advising the topical application of turmeric to mucosal linings.

Fibroids are noncancerous tumors that grow in the wall of the uterus.

1 out of 5 women is affected by fibroids during their reproductive age. 20-80% of women develop fibroids by the age of 50. Surgical procedures and hormone therapy are common lines of treatment.

Curcumin is found to inhibit the growth of cells that make up uterine fibroids and prevents proliferation. The anti-inflammatory property of curcumin mediates this therapeutic effect.

Medical science is slowly accepting the benefits of turmeric against various types of cancer.

Turmeric has been proven effective against tumors and cancers in many scientific studies conducted in labs and there is a large number of people I have seen over forums praising turmeric for the benefit they felt in their health condition.

Interestingly India has the lowest incidence of breast cancer in the world and it also has the highest consumption as well as the production of dietary turmeric worldwide.

Turmeric is also proven to inhibit the growth of ovarian cancer cells; ovarian cancer is the leading cause of death when it comes to gynecological cancer.

Curcumin is reported to cause cell death of cervical cancer cells by acting against estradiol- a primary female sex hormone which under adverse conditions helps in the progression of cervical cancer (cancer in the lower part of the uterus).

Turmeric can be consumed daily in the diet as curries or rice preparations, soups or even with milk. Turmeric supplements in the form of capsules and tinctures are also available. The prescribed dose is as follows:

In case of ingestion of inappropriate dose or allergic reaction, it can pose adverse effects.

Few conditions in which it is advisable to consume turmeric with care are:

So above are some of the many ways turmeric benefits the female reproductive system. I am sure there are many more benefits and I will keep updating them as I find them.

For the benefit of others please do share your experience of using turmeric – good or bad.