Uterine fibroids or uterine leiomyomas are benign tumours that are common in the women of reproductive age.

These tumours arise from the overgrowth of smooth muscle or connective tissue in and around the uterus (the womb).

There are no known definite causes of fibroids in the uterus but several risk factors include being overweight. Certain races are known to be more sustainable to this for example African-Americans.

Uterine fibroids seldom show any symptoms, but those that do include heavy periods, abdominal pain, frequent urination, and reproductive problems.

Lower abdominal pain and pain during intercourse are also some common symptoms seen in the presence of fibroids.

If not removed, they can also cause infertility or miscarriages. These can be found through gynecological examinations.

How Turmeric can help in uterine fibroids

Turmeric is a common ancient herb that is used for edible and medicinal purposes all over the world. It is used in curry and other food items made usually in Asian countries to add flavour, colour, and aroma.

Recent research has proven its efficacy for the treatment of arthritis and several types of cancers as well.

Research has revealed that the active ingredient in turmeric, which is responsible for its characteristic colour, odour and most of the medicinal properties, is curcumin.

It has potent anti oxidant, anti inflammatory and healing effects that help in curing diseases like cancers including uterine fibroids.

Uterine fibroids are caused by excessive growth of smooth muscle cells in and around the uterus.

They appear as lumps in the uterine wall and though very common, they are one of the biggest threats to the reproductive health of women.

Several reasons may cause excessive growth of the tissue in the uterus and this uncontrolled growth needs to be stopped to cure this ailment.

A human receptor in the cells of several organs called PPAR-Ƴ (peroxisome proliferators – activated receptor – gamma) is involved in inhibition of growth of fibroids.

PPAR-Ƴ is a receptor that when bound by inflammatory molecules such as Arachidonic acid or its metabolites, is activated. Once activated, it inhibits the growth and proliferation of the target cells.

Curcumin has been shown to be one of the compounds that can bind to and activate PPAR – Ƴ.

In the uterus, curcumin binds to this receptor on the uterine tissue cells and activates it. The activation of PPAR – Ƴ leads to the control of unnecessary growth of the uterine smooth muscle cells and tissues, leading to healing of fibroids.

What it means: curcumin from turmeric helps in inhibition of the unnecessary and excessive growth of the uterine tissues which helps in controlling uterine leiomyomas or fibroids . 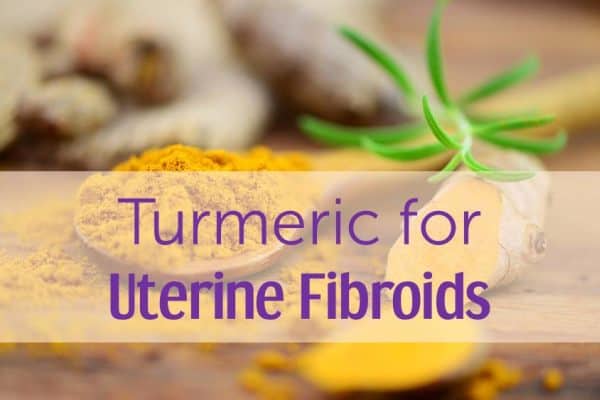 It is usually not enough to stop the growth of the tumour cells.

The lumps of tumour that are already present need to be removed as well. Thus it is important to kill these tumour cells to heal the fibroids completely.

In general, our body has its own mechanism to kill cells which is called apoptosis or programmed cell death.

Apoptosis occurs in the cells in case of presence of any irreparable damage which can turn the cells cancerous or harm neighbouring tissues.

However, some cells with irreparable damage escape apoptosis and become cancerous. These cells then continue dividing and form tumours.

Recently, in several clinical investigations, it was revealed that curcumin from turmeric has the ability to induce apoptosis in the cells of uterine fibroids.

Curcumin has been shown to up regulate pro-apoptotic factors in these cells which then undergo autophagy.

Autophagy is a method employed by the cells to commit suicide. They release the digestive chemicals and digest their own components, thus undergoing programmed cell death.

Curcumin has been shown to induce apoptosis via autophagy in these cells, controlling the formation of fibroids.

What it means: curcumin induces programmed cell death in the cells forming fibroids or tumours in the uterine fibroids/leiomyosis. This controls and heals the disorder naturally .

3. Curcumin decreases the formation of fibroids in the uterus

Uterine fibroids are tumours of the cells that lead to fibrosis. These cells usually secrete a lot of extracellular matrix components (the molecules that fill up space on the outside of cells).

These components include collagen and other fibrous proteins.

The deposition of these extra cellular matrices (ECM) components makes the tissues hard and non-flexible. This is the characteristic of fibrosis.

In the uterus, the cells which turn cancerous and form tumours are the ones which secrete these extracellular matrix components which cause additional problems.

A special molecule called fibronectin in one of the major components of the extracellular matrix in the uterine tissues and in case of fibroids, it is usually found in large amounts in the tumour lumps. It plays a major role in the ECM and promotion of growth of cells.

Altered expression of fibronectin, thus, has been shown to be the reason for fibroids.

Curcumin from turmeric has been proven to be a potent inhibitor of fibronectin in the uterine tissues. It not only prevents fibronectin secretion, it also acts as a neoplastic agent which means that it prevents the formation of new cells.

Development of blood vessels or angiogenesis is a process in which the tumour cells secrete factors so that the blood vessel formation takes place in it and they get proper oxygen for their survival.

This process is important to make sure that the tumour proliferates properly.

The tumour cells secrete certain growth factors that attract the blood vessels and they outgrow in the region of the cancerous lumps. Inhibiting this process devoids tumour cells of oxygen supply leading to their death.

Studies on curcumin and its effect on reproductive disorders have shown that the compound inhibits the process of angiogenesis or blood vessel development in the extra growth in the uterine tissue.

In other words, it does not allow the blood vessels to grow in the vicinity of tumour cells.

It does so by inhibiting the effect of vascular endothelial growth factor, which is an important angiogenic compound that the tumour cells make use of, for angiogenesis.

Inhibiting VEGF leads to the lack of angiogenesis in fibroid lumps, suffocating them to their death.

What it means: curcumin from turmeric inhibits the growth factors that help in developing blood vessels I the fibroid tissue. This leads to the restraining of oxygen supply to these cells and the tumour cells die .

5. Curcumin acts as an anti-inflammatory agent

Inflammation is one of the important reasons that lead to the alteration of the cells. This alteration causes abnormal release of growth factors and abnormally high cell division which results in uterine fibroids.

Turmeric has been identified as one of the important dietary phytochemical that helps in amelioration of the inflammation by healing the uterine tissues of any injury or infection.

It also reduces the amount of inflammatory molecules circulating in the blood and protects the cells.

What it means: turmeric helps in regulation of the inflammation in the uterine tissues by healing them of any injury or infection.

This leads to reduced damage to the cells of the uterus and lesser chances of occurrence of uterine fibroids.

Turmeric is usually used as an edible in small amounts in curry and other food items.

Since turmeric is not well absorbed in the body, black pepper can be taken with it in small amounts to increase its absorption. More details here>

Another way is to take turmeric with fats such as coconut oil, olive oil, etc.

If you are including turmeric in curries etc, most probably they will have fats and thus will take care of absorption anyways.

Turmeric can be added to almost anything from curries, smoothies, salads etc. Here are some great recipes yo get you started>

Traditionally, turmeric is being consumed for centuries all around the world.

Recent research done on turmeric has proven its traditional use to be extremely effective with minimal or no side effects.

Turmeric as a spice is very safe. But if you are taking curcumin supplements, be careful.

Overconsumption of turmeric, however, can sometimes cause mild stomach ache, diarrhoea and kidney stones. Turmeric also decreases blood glucose, thus taking it in medicinal doses along with diabetes medications can lead to hypoglycaemia.

Consumption of turmeric in medicinal doses should be stopped at least 2 weeks before a scheduled surgery to avoid the risk of bleeding and slow clotting.

Also, not much research has been done on the consumption of turmeric in medicinal doses by pregnant women and nursing mothers. Thus, it should be avoided during such times.

Turmeric has been found to heal uterine fibroids through its anti-inflammatory properties and its ability to induce cell death in the tumour cells in the uterus.

It also reduces the growth of the extra cells in the outgrowth and reduces the factors that promote fibroids.

Thus, it is emerging as a potent natural compound that can bring in a new hope for the treatment of uterine leiomyomas.

51 thoughts on “How Turmeric Can Help in Uterine Fibroids”