Turmeric has been used in India and other Asian countries as a spice, for medicinal purposes, and as food. Turmeric root is taken and powdered before use.

According to research, turmeric is known to have more than 600 health benefits! Turmeric has many anti-inflammatory properties that help in treating various health problems like osteoarthritis, rheumatoid arthritis, and ulcerative colitis.

Read our comprehensive article of Health Benefits of Turmeric here>

It also helps people with cancer, multiple sclerosis, Alzheimer’s disease, high cholesterol, etc. It can also provide health benefits for those with lichen planus (a chronic disease that affects the mucous membrane of the skin, mouth, and tongue) and chronic anterior uveitis (inflammation of the middle eye).

Its anti-oxidant properties can prevent cataracts and cancer. Turmeric can reduces the risk of contracting atherosclerosis by preventing blood clots. Diabetic patients and those with viral infections can also benefit from turmeric.

People use anti-inflammatory drugs like ibuprofen or aspirin to cure inflammatory conditions.

Why do you need to take these drugs when you can use turmeric in various forms without any potential side effects?

Turmeric also helps to prevent blood from clotting. It reduces inflammation caused by wounds, acne and other skin conditions. Hence, a little bit of turmeric added to various foods can provide these benefits on a daily basis.

Since there are so many health benefits of curcumin, turmeric tea is one way of enjoying them.

You can read all the benefits under benefits section>

Studies conducted at the University of California have found that curcumin that is the active ingredient in turmeric and therefore in turmeric tea can reduce the instances of Alzheimer’s disease.

This is why a study of elderly people in Indian villages found that they had the lowest instances of Alzheimer’s in the world. When beta-amyloid plaque accumulates in the brain, this abnormality causes Alzheimer’s disease.

Curcumin in turmeric tea can block this plaque accumulation and reduce inflammation of neural tissue that is another cause of Alzheimer’s disease. Freshly brewed turmeric tea provides all the great health benefits of curcumin.

There are several popular variants of turmeric tea possible. Here are some of them:

Take four cups of water and bring it to the boil. Add 1 teaspoon turmeric. Reduce the heat and let it simmer for at least 10 minutes. Strain this using a fine sieve. Add lemon or for taste.

As a variation, a teaspoon of ginger can be added to the turmeric tea. Good quality turmeric powder must be used for this recipe.

Tips on how to choose good turmeric powder>

Another great addition can be cinnamon. Cinnamon has awesome health benefits and also serve as a sweetener.

Read how cinnamon and turmeric together can benefit health>

However, grating fresh turmeric root each time you brew your tea can provide a richer flavor.

Since the health benefits of turmeric are widely known, turmeric root is available in most grocery stores worldwide.

This is the basic recipe to prepare turmeric tea.

You can use different ingredients depending on your specific preferences. There are turmeric tea bags available for those who do not have the time to brew a cup from scratch.

However, the best flavor can be got from brewing a cup using fresh ingredients.

This is a tasty variation to the basic turmeric tea recipe.

Take a cup of coconut or almond milk and warm it gently. Mix turmeric (1/2 teaspoon), a pinch of cayenne pepper, finely chopped ginger root (1/2 inch), 1-1/2 teaspoon of any sweetener or cinnamon in a mug.

Pour a little of the warmed milk into the mixture and mix till all lumps are removed. Mix in the rest of the milk and strain before drinking.

This recipe could be great to soothe a sore throat, runny nose or relieve stress after a hard day’s work.

A word of caution ..

Turmeric as a spice is very safe, which means if one takes turmeric in limited amounts it has no side-effects.

But one should not take too much of turmeric too as then may have some side effects if taken for a long term.

It could also affect those with gallbladder disease, those who take blood thinner medications, drugs for diabetes or stomach acid-reducers.

Pregnant women are advised to control consumption since it could stimulate the uterus.

Turmeric Tea – Best Way to Take Turmeric? How Much? 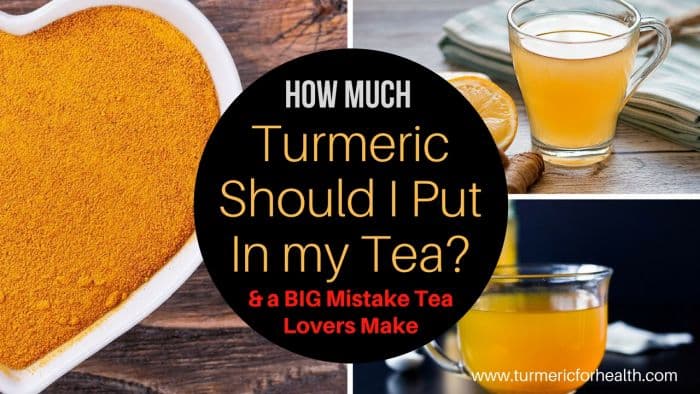 Turmeric is poorly absorbed in the body. It means if you are putting it in tea and drinking it just like that, you are not likely to benefit at all from it. This is a BIG mistake turmeric lovers make. We receive so many emails and messages saying turmeric had no benefit at all when taken with tea. In most cases, this is the reason.

Black pepper and fats are known to increase absorption of turmeric in the body. They need to included in the tea somehow. So, we suggest mixing ground black pepper in tea as it might be difficult to add oils to it.

You can also add other healthy items to your tea to make it even better, ginger, cinnamon, lemon, etc.

Amount of turmeric that can be safely consumed per day

The amount of turmeric to be consumed depends on the purpose. One may consume turmeric for the following reasons:

As most of the benefits and effects of turmeric are primarily due to its curcumin content, it is vital to note down the accepted limits of curcumin.

Turmeric contains about 4-5% curcumin, and thus. One can take about 2-4g of turmeric powder with the tea, which makes up to 1-2 tsp. However, if one is consuming turmeric in other foods, this amount has to be balanced accordingly.

However, there is no single dosage that can suit everyone. Thus, start with small doses of ¼ tsp daily and if you do not experience any side effects, gradually increase the dose by ¼ tsp daily for up to 1-2 tsp daily.

Moreover, turmeric does contain some other nutrients and components. Here is their content in 1 tsp (2g) of turmeric with the percentage of daily required amounts:

These statistics show that the concentration of nutrients in 1 tsp of turmeric is unlikely to cause any unwanted effects or toxicity. Thus, consuming 2-3g turmeric in the diet is entirely safe.

However, these values are noteworthy for individuals who need to limit certain nutrients due to their health condition.

Dietary intake of turmeric is considered very safe. However, high doses may cause gastrointestinal problems such as diarrhoea and gastroesophageal reflux in some individuals.

High doses of turmeric should be avoided in the following cases:

If you have a serious health condition or are on medications, it is recommended to determine what amount of turmeric you can use by consulting a medical practitioner.

Read: Possible side effects of turmeric

Turmeric tea is a great way to take turmeric, but only when you take care of the low absorption issue related to it by including oils or black pepper. Further, it is best to start with low quantity, say 1/3 tsp and then slowly increase it to 1-2 tsp.

It is important to get good quality of turmeric powder to include in the tea. If you are confused, here are some good suggestions from our side.

If you have tried turmeric tea, do share your experience and recipe here for others to benefit!