Lichen planus is a non-infectious rash that can affect the skin of any part of the body.

If you feel it is uncommon, think again. According to some broad estimates it infects as much as 2% of world population. This roughly means around 140 mn people. [1]

The exact cause of lichen planus is unknown but it is thought to be a result of immune system malfunction. It could be due to an allergic reaction or autoimmunity.

Other risk factors which can mess up the immune system causing lichen planus include drugs, medications, diseases like hepatitis C, and chemicals such as Gold etc.[2]

Lichen planus mostly affects adults and rarely children. It causes tender or painful rashes and eruptions which eventually grow in size and even form ulcers. They look like pimples and can affect any part of the skin, including the oral cavity (inside the mouth).[3], [4]

Other symptoms include itchiness, stretch marks, reddish purple color in the affected area, hair loss, dry mouth, blisters, and nail abnormalities. It is usually diagnosed based on appearance and through skin biopsies and blood tests.

Though this disorder is easily treated if present on the outer skin of the body parts, it generally causes more complications in case of oral ulcers.

Lichen planus in the mouth is the most common type and the most painful and problematic type. Oral lichen planus is also more recurrent and resistant to major treatments[5].

Long term ulcers can even lead to oral cancers[6],[7].

How Turmeric Can Help in Lichen Planus

Turmeric is a popular ancient herb that is widely used as a flavoring and coloring agent in curry and another food item.

This herb is well known for its medicinal properties that are used to treat several disorders of the skin, eyes problems, digestive issues, swelling, inflammation, and pain, etc. [8]

Turmeric contains several active components including curcuminoids that are responsible for its powerful anti-inflammatory and anti-oxidant activities.

Research has provided enough evidence for its efficacy in curing major skin disorders including lichen planus with minimum side effects. [9],[10],[11]

Given below are some of the ways why turmeric can be helpful in curing lichen planus. 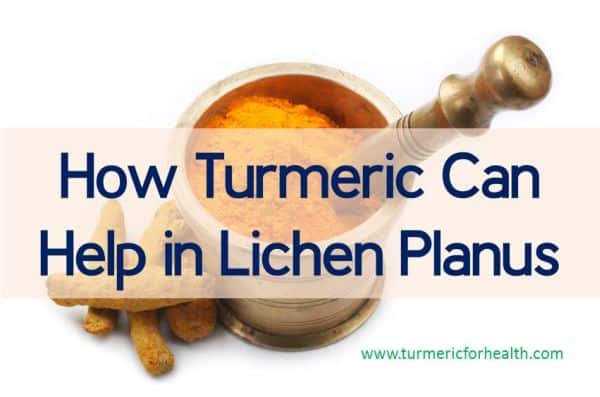 Inflammation is one of the major causes of lichen planus.

The immune system gets triggered to attack the body cells considering them foreign and leads to inflammation that contributes to swelling, pain, eruptions, and redness; characteristic of this disorder. [12],[13]

Several inflammatory pathways have been characterized for the progression of this disorder.

It has been found that the primary immune cells called the dendritic cells (DCs) secrete interferons (IFN) in the blood that attract the other immune molecules to attach on the skin cells. [14]

Another study has shown that the skin cells or the immune cells secrete certain attractants called the cytokines which may lead to the attack of the immune system on the target affected area. The major cytokines identified to be associated with the inflammation in this disease are IL-1, IL-6, IL-8 and TNF-α.

Oral lichen planus has also been found to be caused due to the activation of an inflammatory pathway called NF-κB in the cells of mouth. This leads to the exacerbation of the inflammation by secretion of pro-inflammatory molecules in the tissue. [15]

Turmeric has been proved to be very efficient in treating inflammation. Curcuminoids in turmeric help reduce the levels of pro-inflammatory cytokines such as IL-1, IL-6 and IL-8 along with interferons and TNF.

In fact, curcumin has a powerful inhibitory action on the NF- κB pathway in the cells and helps prevent the release of inflammatory signals and molecules in the affected area. [16],[17]

Research has shown that long term exposure of the cells to cytokines like IL-8 can lead to excessive inflammation and cancer. If fact, oral lichen planus, if not treated eventually causes oral cancer.

Turmeric, however, has been shown to potentially inhibit IL-8 and prevent future inflammation and cancer development in the target tissue. [18],[19]

What it means: turmeric is an effective anti inflammatory agent and helps reduce the symptoms of lichen planus, especially its oral variant by controlling the immune system and reducing the expression of pro-inflammatory molecules in the affected area.

Inflammation is a symptom of lichen planus after it has occurred. Oxidation, however, is one of the major causes of inflammation.

The cells in the affected area get damaged and release reactive oxygen species which in turn contact and damage other parts of the cells.[20]

This starts a chain reaction which leads to extensive cell injury and cell death.

When the oxidation spreads around in a particular area, the immune system gets activated and starts attacking the target cells, leading to inflammation and all the other symptoms of the disease. [21]

Long term oxidative stress on the cells not just increases the graveness of the disease but also leads to irreparable DNA damage which causes cancer.

Oxidative stress is, thus, the target reason for the cause of lichen planus, especially its oral variant and other associated complications. [22],[23]

Curcumin in turmeric is best known for its potent anti-oxidant properties.

Studies have shown that consumption of turmeric by patients with oral lichen planus dramatically reduces the expression of oxidation markers in the saliva and oral tissue.

Melonaldehyde (MDA) and 8-hydroxydeoxyguanosine (8-OHdG) are the two most important oxidative markers in the saliva that are found in highest numbers in case of lichen planus.

These markers are used to estimate the extent of damage and oxidation in the lesions caused due to the disease. [24],[25]

Turmeric intake has shown to markedly reduce these markers and increase the activity of anti-oxidant molecules called glutathione in the target tissue.

It also scavenges the free oxygen radicals generated in the damaged tissue and protects against further damage.

It also increases the activity of vitamin C and E in the cells that also help in fighting against oxygen, peroxidation and consequent DNA damage.

This process not only helps cure lichen planus but also helps in preventing cancer development in the target tissue. [26],[27],[28]

What it means: turmeric is a very potent anti-oxidant. It helps in reducing the oxidative stress in the target cells and alleviates the symptoms of lichen planus.

It also decreases the risk of development of oral cancer in case of oral lichen planus by fighting the oxidative damage to the DNA.

Itching is one of the major symptoms of lichen planus.

When occurring on the body parts other than the oral cavity, itching is usually uncontrollable and causes marks and discomfort.

It also increases the risk of extensive bruising and swelling in the affected area. [29],[30]

External or topical application of turmeric or curcumin has been proven to be extremely soothing due to its antipruritic (anti-itching) effects.

It helps relieve itching by its anti-inflammatory and vasodilating (blood thinning) activity. [31]

It also modulates the cells of the blood so that lesser inflammatory and pruritic molecules are released at the target site leading to lesser redness, swelling, itching, and pain. [32],[33],[34]

What it means: curcumin from turmeric helps control the severe itching and consequent bruising in lichen planus, thus improving the overall quality of life and treating the disorder.

Consumption of turmeric in therapeutic amounts is a little less defined in terms of dosage as compared to other standard medications.

Due to lack o research on its effects on children, it should not be given in high doses to people of the younger age group.

It is also not advisable to be consumed in large amounts by pregnant women due to lack of enough research on this herb for its safety in pregnant and nursing mothers.

In general 1 tsp of turmeric per day is considered to be very safe.

Turmeric is poorly absorbed in body and thus needs assistance. Including black pepper and fats does the trick.

It is best to include turmeric as part of your diet. Some great ways to do so are:

Since turmeric is not easily absorbed in the body, consuming black pepper along with it can help its absorption through the gut. [35]

20 patients suffering from oral lichen planus participated in the study.

The severity of the disease was measured based on the predetermined index and blood tests were conducted to monitor the level of inflammation.

They were given either 6g of curcuminoids a day in three doses or placebo.

Changes in parameters measured at the beginning of the study and at the end were statistically significant in the curcuminoid group.

Curcumin brought about a decrease in swelling, inflammation, ulceration, and bleeding.

The overall score used to assess the disease improved with curcuminoid treatment.

Curcuminoids are the bioactive constituents of turmeric. Their most important property which brought about this effect was anti-inflammatory property.

Additionally, their antioxidant and antimicrobial property also must have served to be effective in reducing signs and symptoms of oral lichen planus.

Turmeric is usually extremely safe and efficacious, without posing any major side effects. Sometimes its over consumption can cause mild diarrhea and upset stomach but overall it is a harmless herb.

However, if taken in large quantities, turmeric can interact with certain drugs that are taken for other indications at the same time as this herb. It is a powerful blood thinning agent and can increase the effect of blood thinning drugs.

Conversely, it can interfere with the effect of blood coagulating drugs or the ones that increase the viscosity and platelet content of the blood. Consumption of turmeric should be stopped at least 2 weeks before a surgery to avoid the risk of bleeding.

Turmeric is a powerful ancient herb that is extremely efficient for treating several skin disorders, including lichen planus. It modulates the immune system and corrects its functionality which has gone wrong in case of this disease.

It also helps in long term pain and inflammation management, creates a soothing healing effect on the lesions of the skin, thus treating this disease, which allopathic medications have not been able to achieve completely.

It is thus, emerging as a novel, alternative source of efficient medication for untreatable and recurrent skin ailments like lichen planus.

22 thoughts on “How Turmeric Can Help in Lichen Planus”