Advil or ibuprofen is a commonly used Non-Steroidal Anti-Inflammatory Drug (NSAID), while turmeric and curcumin are excellent natural agents that reduce inflammation.

Both of them have shown promising results in treating inflammation-associated disorders. So can Turmeric and Advil be taken together for obtaining better results? Let us find out.

As per research, turmeric and curcumin are better than Advil in treating inflammation and pain, regarding safety, tolerability and efficacy. Turmeric can even alleviate some side effects of this drug.

However, available data also points out to a possibility of interaction between the two which may result in alteration of their therapeutic effects and increased adverse effects.

Though dietary turmeric is safe, concomitant use of turmeric/curcumin supplements should be avoided with Advil and a gap of 3-4 hours must be maintained to prevent possible interaction.

Here are some benefits and concerns associated with the use of turmeric together with Advil.

Can I Take Turmeric and Advil / Ibuprofen Together? 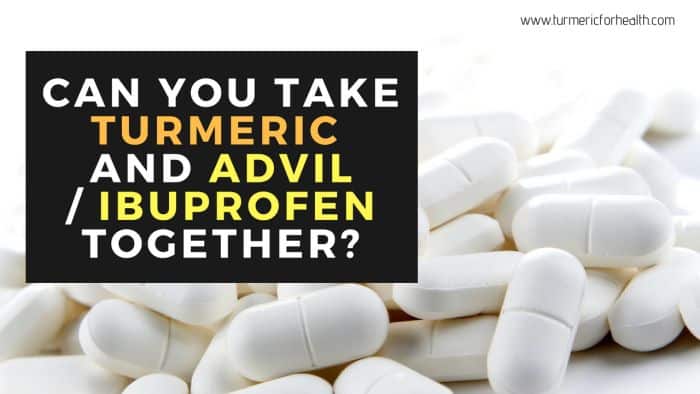 Here are some positives of taking turmeric and Advil / ibuprofen together –

Turmeric and curcumin can reduce inflammation in many ways and target multiple inflammatory mediators.

The mode of action of both turmeric and Advil shows similarity in the fact that both are inhibitors of the cyclooxygenase (COX) enzymes responsible for inflammation.

In various studies conducted on arthritis patients, curcumin in turmeric was found to be as effective as Advil (ibuprofen) in reducing inflammation and pain.

Turmeric has also been shown to show a synergistic activity and increased therapeutic action with some anti-inflammatory agents.

Thus, the possibility of use of turmeric as an adjuvant to Advil may not be ignored.

Turmeric may be better than Advil!

In some cases of neurological disorders like Alzheimer’s disease, NSAIDs helped in reducing inflammation but were unable to slow down the progression of the disease.

Thus, in such cases, turmeric can confer multiple benefits due to its neuroprotective and anti-inflammatory nature and prevent the occurrence or advancement of some disorders.

Turmeric is better than Advil not only because of its many therapeutic effects but also because it is safer than Advil.

The use of Advil poses a risk of many adverse effects on health, but turmeric has been proven to be safe and well tolerated, even at high doses, without the occurrence of any serious side effects.

This is the reason why the research on turmeric and curcumin has gained pace.

They have been identified as natural herbs with potent anti-inflammatory and analgesic properties that could serve as a useful alternative to NSAIDs like Advil.

Thus, the consumption of turmeric with Advil may help in reducing drug doses and the magnitude of possible side effects.

This makes turmeric, a better candidate than NSAIDs for treating inflammation and pain.

Turmeric may help alleviate side effects of Advil

Consumption of Advil may result in adverse gastrointestinal effects in some individuals. Long-term or overuse may also cause liver and kidney damage.

Being an excellent antioxidant, turmeric can reduce the toxicity caused by drugs to the liver and kidneys. Also, its gastroprotective properties help in treating gastric ulcers, cancer and any other gastrointestinal damage that might be caused by Advil.

Thus, taking turmeric with Advil may help lower the side effects.

Some possible issues of taking turmeric and Advil / ibuprofen together –

Turmeric and piperine may interact with Advil

Turmeric is used with black pepper for improved absorption. The bio-enhancing component of black pepper, piperine can also increase the intake of drugs. Along with curcumin, it can significantly impact the pharmacokinetics of Advil.

Curcumin and piperine inhibit enzymes Cytochrome P450 and P-glycoprotein which help in the metabolisation of drugs in the body. This increases the absorption, distribution and therapeutic effects of the drug.

Over a more extended period, higher concentrations of the drug may also result in increased toxicity and side effects.

However, these are laboratory findings, and more research on humans is needed to derive definite conclusions.

It has been found that certain over the counter drugs like ibuprofen (Advil) may alter the chemical stability of curcumin, and this might further affect the therapeutic action of this natural compound.

How to benefit from both Turmeric and Advil / ibuprofen

This is because turmeric is such a small amount (1/2- 1 tsp daily) is unlikely to have any adverse effects.

However, care must be taken while taking turmeric/curcumin supplements with Advil and a gap of 3-4 hours must be maintained to avoid unwanted effects.

Moreover, one should consult with the doctor before taking any herbal supplements along with medications. He/she may also be able to advise you on the appropriate dosage of the herbs and drugs based on your medical condition.

How to Take Turmeric?

You can also add turmeric to almost anything (curries, smoothies, etc.) Just make sure that to enhance its bioavailability, you include fat or black pepper with it. Both Golden paste and milk already take care of it.

Any turmeric powder (spice) which is quality works! But if you are confused about which turmeric products to buy, here is a quick list of recommended brands.

If you are already taking turmeric, please share your feedback. if you have a query feel free to comment below and we would try to answer it as soon as possible!

8 thoughts on “Can I Take Turmeric and Advil / Ibuprofen Together?”