Menstrual cycles or periods put forth a number of health challenges for women.

For some, the symptoms are unnoticeable while for some it is very difficult to get past that phase every month.

Pre menstrual syndrome is the initial phase where women face a number of symptoms prior to the start of their menstrual cycle: mood swings, back pain, irritability, bloating, flu-like symptoms, etc.

Even during menses heavy bleeding, irregular cycles, malaise and body ache, gastric symptoms make it quite tiresome for some women.

Menses are a part of women’s health but that does not mean it does not require medical attention. The goal of the current treatment is to reduce the symptoms faced during menses.

Non-steroidal anti-inflammatory drugs are given to help with the pain, hormonal pills to help regulate menses and normalize bleeding and also medications that help with gastric symptoms are administered.

Turmeric is a spice used in Indian and Asian cuisine.

It has an orange-yellow color which is attributed to the presence of curcuminoids. Curcuminoids are antioxidants present in turmeric.

Curcumin, the principal curcuminoid, has a number of pharmacological properties that could be of help during menses.

How could turmeric benefit in menstruation?

Here a few ways by which turmeric acts and could help in relieving or reducing symptoms that occur during menses.

A premenstrual syndrome is a number of physical and emotional symptoms occurring prior to menses. Emotionally women can feel irritable, experience mood swings and depression; some also have uncontrolled rage.

Two capsules were given twice a day for seven days before menstruation and three days after the cycle. This treatment was conducted for 3 consecutive cycles.

Curcumin by virtue of its anti-inflammatory property helped with the pain occurring in PMS and also modulated brain chemicals and thus alleviated mood changes and depression.

Reduction in the score for severity of PMS in curcumin group was by 59 points and in placebo group was around 14 points.

Researchers concluded that curcumin can significantly reduce the severity of PMS.

What does this mean?
Curcumin helps in reducing severity of premenstrual syndrome by regulating brain chemicals- neurotransmitters and reducing inflammation. Thereby it attenuates pain and mood changes occurring in PMS.

2. It can reduce pain and malaise 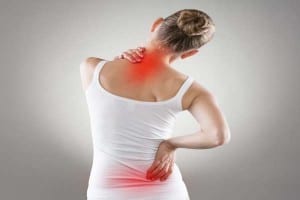 This helps in reducing pain since these enzymes are also involved in pain sensation.

Also by virtue of its antioxidant property, curcumin prevents the formation of reactive oxygen species which also play an important role in pain perception.  (Read Turmeric for Pain)

Animal studies show that curcumin acts as a natural painkiller and also works in combination of painkiller, diclofenac.

The analgesic or painkiller activity of Meriva, a specialized formulation of curcumin, is found to be comparable to that of anti-inflammatory drugs like acetaminophen and nimesulide.

Another benefit of turmeric’s analgesic activity is that it does not cause gastric side effects like regular painkillers.

What does this mean?
Turmeric’s natural painkilling activity can help in the malaise, muscle ache and generalized body ache associated with menstruation. It has an added benefit over the non steroidal anti-inflammatory drugs- turmeric does not cause gastric erosion or any other side effect.

3. Turmeric is a phytoestrogen and emmenagogue 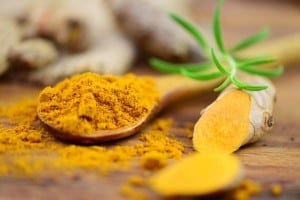 Zava et al have included turmeric in top six herbs that have components that bind to estrogen and progesterone receptors (proteins to which female hormones bind and bring about pharmacological effect).

This suggests its use in female healthcare.

Curcumin is a mild phytoestrogen- a plant source of estrogen.

As per the traditional medicinal system, turmeric is considered as an emmenagogue. It can stimulate uterine bleeding.

There has been no study to prove this, but if this would be proven then turmeric could serve as a natural aid in regularizing menses.

Traditionally turmeric has been used to treat amenorrhea-absence of menstrual cycles.

Having said this, I have to mention that there are a few anecdotal pieces of evidence that suggest that taking turmeric can even reduce a heavy flow during menses.

More research is required to understand the phytoestrogenic activity as well as the emmenagogue nature of turmeric.

What does this mean?
Turmeric possesses estrogenic activity and traditional medicine suggests that it can stimulate uterine bleeding. This could be of help in regularizing menstrual cycle and normalizing flow.

Despite of turmeric’s  property of stimulating uterine bleeding, some have experienced a reduction in heavy flow on taking turmeric.

Due to its uterine stimulating properties, it is advised to avoid turmeric in pregnancy. However Asian women continue to use turmeric in diet even during pregnancy.

4. Turmeric acts as the anti-spasmodic agent

Menstrual cramps or abdominal ache is the most common symptom presented during or prior to menses.

An animal study was conducted to understand the anti-spasmodic effect of turmeric. Contractions in the uterus and intestine were induced by external agents.

High doses of curcuminoids were found to inhibit contractions and relax the smooth muscles of intestine and uterus.

It can be inferred that curcuminoids administration can help in spasmodic pain occurring in the stomach and uterus.

What does this mean?
Curcuminoids’ anti-spasmodic activity can reduce the severity of menstrual cramps.

5. It can reduce mood swings and depression associated with menstruation 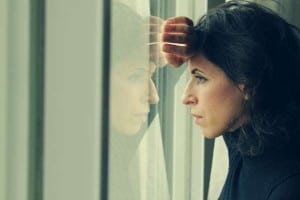 A premenstrual dysphoric disorder is a condition in which women face severe depression, irritability, and mood swings prior to menstrual cycles. Hormonal changes do tend to influence the mood.

A couple of recent studies suggest that curcumin has anti-depressant activities and can help in reducing symptoms of the major depressive disorder.

This ability of curcumin to influence brain chemicals can be of use in managing mood swings, sleep disturbances and depressive-like symptoms associated with menstruation.  (Read Turmeric for Depression)

Brain-derived neurotrophic factor (BDNF) is a protein that is involved in learning and memory.

A study reported that when women suffering from PMS were treated with curcumin, their BDNF levels were high and the PMS related mood symptoms were low.

What does this mean?
PMS is characterised with severe mood related changes and depression like symptoms. Curcumin can attenuate mood swings, depression and anxiety related symptoms occurring in PMS. 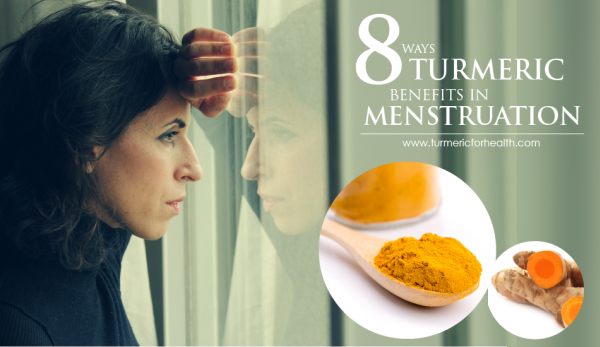 6. Turmeric can help with causative factors behind irregular or abnormal menstruation

A few health conditions can be responsible for the heavy or irregular bleeding during menses and turmeric can help to treat these root causes:

It is a disorder in which uterine lining grows outside the uterus and this can cause painful periods. Curcumin helps in endometriosis by:

For more details on this read Turmeric for Endometriosis.

Uterine fibroids are non-cancerous growth in the uterine lining and can cause prolonged menstrual cycles.  Curcumin is proven to inhibit the proliferation and growth of uterine fibroid cells.

Malik et al suggest that curcumin as a nutritional supplement can be focussed on as a new therapy for uterine fibroids.  (Read Turmeric for Uterine Fibroid)

A polycystic ovarian syndrome is a condition characterized by cysts in the ovary and irregular or absence of menses.

No direct study has been conducted to evaluate the effect of turmeric on PCOS, but as the anti-inflammatory agent, antioxidant and as phytoestrogen turmeric could help with secondary symptoms of PCOS. (Read Turmeric for PCOS)

What does this mean?
Turmeric can help in conditions like endometriosis, uterine fibroids and PCOS which tend to cause irregular or heavy menses.

7. Turmeric can reduce bloating and other gastric symptoms

Prior to menses or even during menstruation, women experience bloating, belching, acidity, etc.

Review studies suggest that curcumin has sufficient therapeutic potential when it comes to a digestive disorder.

Few of the pharmacological properties of curcumin that help in reducing symptoms of indigestion and other gastric symptoms include:

A clinical trial demonstrated that administering turmeric extracts to individuals suffering from indigestion and flatulence improved their health within 7 days.  Around 87% of the individuals receiving the treatment showed a positive response.

Curcumin also inhibits the development of ulcer formation as a result of hyperacidity and reduces gastric inflammation by inhibiting H.pylori infection (a bacterium that contributes to excessive stomach acid).

What does this mean?
Due to its gastroprotective action, curcumin can help alleviate gastric symptoms like bloating, belching occurring during or prior to menstrual cycles.

8. It can protect against infections and toxic conditions

Women tend to develop Candida infection prior to menses or even after it. Curcumin is a proven anti-Candida and anti-fungal agent.

What does this mean?
Turmeric as an anti-microbial agent can serve as a protective measure against Candida infection, menstrual toxic shock syndrome and other infections.

Turmeric in diet is absolutely safe. About ½ to 1 teaspoon of turmeric powder with a dash of black pepper and/or healthy fats (coconut oil or olive oil) should do the trick.

One of the best ways to take turmeric is The Golden Paste. You can directly consume it or add it to your salads, smoothies, rice preparations, soups etc. 1-2 teaspoons of Golden Paste 2-3 times a day is therapeutic.

Another delicious way to take turmeric is Turmeric Milk. You can find some good recipes with turmeric here.

Traditionally turmeric is used to treat amenorrhea (absence of periods) and hence it is thought that it can stimulate menses. If this is the case then it should be avoided in case you suffer from heavy flow; but some individuals suffering from heavy bleeding actually benefit from turmeric.

Menstrual cycles, though a part of each woman’s life, can present with some symptoms that are difficult to endure. Treatment directed towards ameliorating the symptoms such as NSAIDs, antidepressants, hormonal pills can pose side effects.

Turmeric works as a natural aid in reducing menstruation related symptoms- be it mood swings or unbearable pain or irregular or abnormal bleeding. Also it does not cause side effects.

Making turmeric a part of your life can provide long term relief not only in case of menses but any other health related aspect of your life.