Endometriosis is a gynecological disorder where the endometrial lining is present outside the uterine cavity.

If you have not heard of it and feel it is rare, you are wrong.

This disorder which is common with women of childbearing age affects estimated 2-10 percent of women in America. The disease affects millions worldwide.

Endometrium is the inner lining of the uterus whose function is to maintain the shape of the uterus and supply oxygen and nutrition to the foetus during pregnancy.

In endometriosis, this tissue grows outside the uterus, impacting ovaries, fallopian tubes and bowels. Prior to a menstrual cycle, the endometrium thickens and then this tissue is shed with every cycle.

Similarly, the tissue which grows outside the uterus thickens but it has no way to leave the body. It gets trapped, thus forming cysts, scars and leading to inflammation and adhesion of organs.

The main symptoms presented by this disorder are pelvic pain and infertility.

Other symptoms include painful periods, pain during intercourse, heavy bleeding during cycles, pain while passing stools or urinating and irritable bowel syndrome.

However, some women do not suffer from any of these symptoms thus leading to delayed diagnosis. Women suffering from endometriosis are susceptible to developing infertility and ovarian cancer.

The exact cause for this disorder is not known; few factors which are held responsible for this condition are:

Symptoms of endometriosis halt temporarily with pregnancy and end permanently with menopause.

Line of treatment involves symptomatic treatment of pain, hormone therapy, laparoscopic surgery or hysterectomy (removal of uterus). Although these techniques are thought of as treatment, they may tend to complicate the situation in cases by posing side effects.

Therapeutic role of turmeric in endometriosis

Turmeric is an essential ingredient that adds rich flavour to Asian curries. It is a herbaceous perennial plant belonging to the ginger family.

Turmeric has been used traditionally in India to cure skin ailments, stomach disorders, burns, and wounds.

Curcuminoids are a group of compounds present in turmeric that confer pharmacological properties to it. They are strong antioxidants and contribute to radiant yellow-orange color of the spice. Curcumin is the principal curcuminoid that exhibits a wide range of biological effects.

I did research on what scientists are saying about the use of turmeric for endometriosis. The results were encouraging indeed.

Following research studies suggest that turmeric can serve to be a potential therapeutic agent for endometriosis. 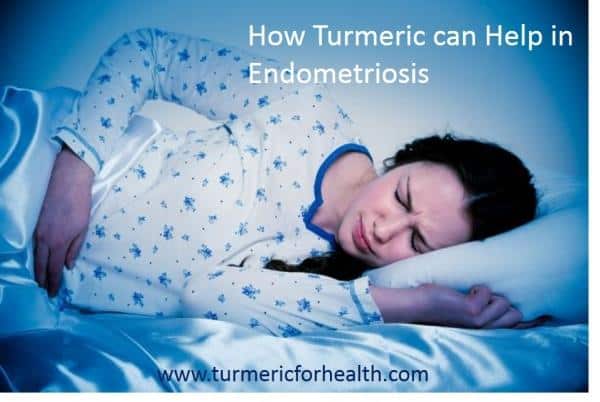 A study conducted in China claims that curcumin prevents the growth of endometriosis endometrial cells by reducing the production of hormone estradiol.

Endometriosis is an estrogen dependant disease.

When treated with curcumin at different concentrations, the number of endometriotic cells reduced, the growth rate and estradiol production reduced.

Curcumin is a weak phytoestrogen (Phytoestrogens are plant-derived xenoestrogens ) and is able to counteract the proliferative effect of estradiol, thus causing cell death and preventing proliferation.

What it means: Turmeric helps in curbing the growth of endometriosis by reducing the production of hormone estradiol.

Research conducted in Indian Institute of Chemical Biology, Kolkatta, India suggests a new mechanism behind the anti-endometriotic activity of curcumin.

In this study, endometriosis was surgically developed in mice and the effect of curcumin on matrix metalloproteinases (MMP), an enzyme, was observed.

Endometriosis is characterized by abnormal tissue growth and MMP are enzymes that play an important role in tissue remodeling and cell proliferation. The activity of MMP was high in endometriotic tissues.

Curcumin administered before and after the development of endometriosis, dose-dependently inhibited endometriosis. It reduced the secretion of MMP, thereby leading to decreased expression of tumor necrosis factor-alpha: a key player in inflammation.

It also controlled and prevented oxidative stress (imbalance between pro-oxidants and antioxidants in the body) in endometriotic tissue.

All parameters recorded in this study demonstrated that curcumin does not present anti-endometriotic effect alone, but also utilizes its anti-inflammatory and anti-oxidant properties to combat endometriosis.

What it means: The anti-inflammatory and antioxidant properties of turmeric can help in inhibition and also expression of the disorder (if already present)

Curcumin is found to inhibit angiogenesis in an experimental model of endometriosis.

Angiogenesis is the development of blood vessels from pre-existing blood vessels. Endometriosis is dependent on multiple factors, one of them being blood supply.

Adequate blood supply is necessary for the survival of endometriotic lesions, which is why angiogenesis is important for the spread of the disease.

Experimental endometriosis was induced in rats and they were split into experimental groups. Doses of 50,100 and 150mg/kg of curcumin were administered to respective groups for 4 weeks.

After monitoring the rats for 4 weeks, conclusions were made that vascular endothelial growth factor and microvessel density (parameters used to assess angiogenesis) were high in endometriotic tissue and they decreased when treated with curcumin.

Results of this study demonstrate a new mechanism by which curcumin can treat endometriosis.

What it means: Turmeric inhibits the process called angiogenesis, which is known to be important for the spread of endometriosis.

Experiment conducted in Nanjing University School of Medicine evaluated the effect of curcumin along with letrozole (a drug used to treat estrogen-sensitive tumors) on endometrial tumors induced in mice.

Curcumin at a dose of 300mg/kg produced effects similar to those brought about by letrozole at 10microgram/d. It was concluded that curcumin can enhance the effect of letrozole against endometrial tumors.

What it means: Turmeric in help in rare complication where Endometriosis leads to endometrial cancer.

These drugs control inflammation but increase an individual’s susceptibility to gastrointestinal disorders, cardiovascular and cerebrovascular events.

Curcumin acts in the same manner as NSAIDS but does not cause these side effects. Meriva (2g), a formulation of curcumin, shows analgesic activity comparable to the standard dose of acetaminophen.

Studies have shown that curcumin can be taken in combination with low doses of nonsteroidal medications.

What it means: Turmeric is a great painkiller and without side effects. Thus, it can be of great help for pain associated with endometriosis.

Turmeric has not been formulated yet as a drug targeting endometriosis specifically.

However, one can consult a health practitioner and consume turmeric in diet or supplements so as to reap the variety of health benefits provided by it.

Turmeric can be safely consumed as a part of regular diet however its absorption and efficacy can be improved by taking it along with black pepper.

Turmeric supplements are available in the form of capsules containing powder, tincture or fluid extracts.

The recommended dosage is as follows:

If you want to read a more detailed article on dosage, please check here.

No adverse effects have been reported on the consumption of turmeric in a regular diet. That is the way I recommend anyone to take turmeric (more details in this article)

Turmeric supplements should be taken with caution in case of gall bladder disorders, bile passage obstructions, and gastrointestinal disorders.

While most of the studies conducted were on animal subjects but turmeric does present itself as a promising natural way to look for in endometriosis for various benefits. It can intervene in various ways and may help in prevention, stopping its spread, avoid complications (cancer) and provide relief in pain.

9 thoughts on “5 Ways Turmeric Can Help in Endometriosis”