Polycystic kidney disease (PKD) is a genetic disorder wherein multiple cysts develop in the kidney. Cysts are sac like structures that are filled with fluids.

There are two types of PKD:

Mutations occur in genes PKD1 and PKD2 which code for proteins polycystin 1 and polycystin2 respectively.

As a result of these mutations, kidney cells proliferate and divide repeatedly to form cysts which get filled with secreted fluid. Development of such cysts can eventually lead to kidney failure.

Sometimes symptoms do not manifest in some individuals due to which patients go undiagnosed. In other cases, symptoms are developed in late 20s. Few of the symptoms are:

Sometimes complications can arise outside the kidney:

Turmeric, a well-known herb, and spice is found to be therapeutic for this disease and also ameliorates symptoms and risk factors associated with it.

Turmeric is commonly used to spice up and to add flavor to most Asian dishes. But that is not the only quality associated with it.

Turmeric has been used as a herb in various systems of traditional medicine especially Ayurveda.
It occurs as a rhizome in nature from which turmeric powder or turmeric oil is extracted. Two of its vital bioactive fractions are:

Turmeric has anti-inflammatory, anti-oxidant, anti-pyretic, anti-cancer, anti-microbial and many other pharmacological properties.

Research proves that turmeric has renoprotective properties- it protects kidneys from disorders.

How does turmeric help in polycystic kidney disease? 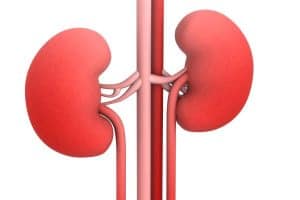 Curcumin’s therapeutic effect has been evaluated in an experimental model of renal cysts.

In this model, curcumin inhibited cyst development and enlargement. At a maximum dose, it showed 62% inhibition of cyst formation.

Curcumin did not cause any toxicity or cell death.

It reduced the activity of proteins that lead to abnormal cell growth and proliferation.

A number of biochemical pathways and their components are involved in cyst formation. Unlike other drugs, curcumin does not attack only one target. I

t is proven that curcumin manipulates a number of components to prevent cyst formation.

Combination of curcumin and ginkgolide B is found to more effective in inhibiting cyst formation than individual herbs. Ginkgolide B is a bioactive compound obtained from a herb Gingko biloba.

The anti-cyst activity of these herbs is exerted by inhibiting the activity of cell signalling pathways that lead to abnormal cell growth.

7 Benefits of Turmeric in Risks Linked With Polycystic Kidney Disease

Following conditions are seen as complications and symptoms of polycystic kidney disease. Turmeric can help combat these conditions.

Kidney stones are aggregates of minerals found in the kidney.

If they are large in size they block the ureter and cause pain. Curcumin prevents development of kidney stones.

However turmeric as a spice is rich in oxalates. So if you are susceptible to developing kidney stones then limit intake of turmeric as a spice. (Read Does Turmeric Cause Kidney Stones?) One can opt for curcumin supplements in such cases.

A common complication of Polycystic Kidney Disease is high blood pressure which increases susceptibility to heart diseases and stroke. Curcumin is good for heart health. (Read Turmeric for hypertension)

One research study proves that alcoholic extract of curcumin acts as a vasorelaxant- it dilates and relaxes blood vessels allowing smooth blood flow. 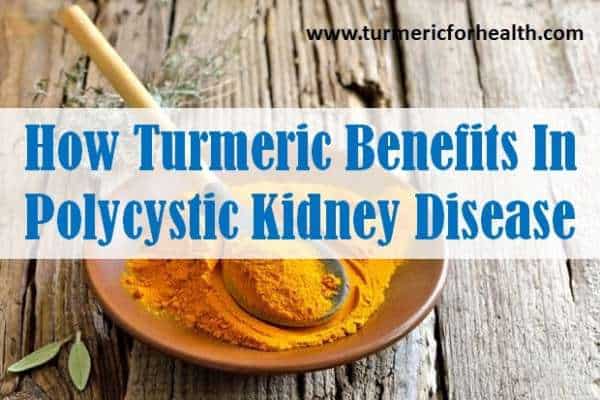 Enlargement of cysts can lead to pain in lower back, abdomen and sides.

Headaches are also a common symptom of Polycystic Kidney Disease. Turmeric is famous for its anti-inflammatory property and analgesic property.

As a part of a herbal supplement, turmeric has been used to treat inflammation in chronic kidney diseases. Find out how turmeric helps in treating pain.

Fever generally occurs when the cysts rupture or get infected. Turmeric has anti-pyretic or anti-fever properties. A few remedies suggesting use of turmeric in fever are listed here.

Urinary tract infection is any infection occurring in any part of the urinary system.

Polycystic Kidney Disease can increase the risk of infection in cysts or any other part of the system. Turmeric has anti-microbial properties.

7. It protects from Liver toxicity

Polycystic Kidney Disease can also manifest as cysts in the liver.

Also, continuous use of medications can lead to liver toxicity.

Due to its antioxidant and anti-inflammatory properties curcumin plays a hepatoprotective role: protects the liver from disorders and drug-induced toxicity.

Sometimes the disease tend to progress in a way that the only option is to undergo surgery for removal or replacement of kidney. Turmeric is proven to be therapeutic in case of kidney failure or surgery.

Apart from that, there are many other factors to be kept in mind to ensure the good health of an individual who has undergone surgery. Turmeric can help in post-operative care.

Turmeric in diet can help improve the antioxidant defense.

You can simply sprinkle turmeric in salads, soups, smoothies or use it in cooking.

Curcumin in turmeric is poorly absorbed in the body.

Taking turmeric with black pepper and oil increases the absorption.

Golden Paste combines these 3 elements making it an effective way of taking turmeric.

Start with small doses say ¼-1/2 tsp and increase gradually if no side effects are observed. The recommended dose is 1-2 tsp 2-3 times day (precisely 1 tsp 3 time a day).

Turmeric in a diet is safe but a few precautions need to be noted. (Read Side effects of turmeric)

A few important precautions to consider while taking turmeric for kidney health is that turmeric as a spice is high in oxalates and also can contribute to dietary potassium.

If you are susceptible to kidney stones, limit intake of turmeric as a spice. (Does Turmeric Cause Kidney stones?)

In such cases, one can opt for curcumin supplements for therapy after consulting a health practitioner.

Turmeric has anti-platelet property. So if suffering from bleeding risk or taking blood thinners , consult a health practitioner before taking turmeric. Also if scheduled for surgery, it is advised to discontinue turmeric supplements 2 weeks prior to surgery to avoid bleeding risks.

Turmeric is one miracle herb that seems to be helpful in treating every next disorder. This holds true for even polycystic kidney disease. Being a genetic disease, turmeric can’t cure this ailment but can effectively control its progression and reduce the symptoms and risks associated with it.

4 thoughts on “How Turmeric Benefits In Polycystic Kidney Disease”