In a nutshell ,it is our body’s liquid waste disposal system. When the urinary tract gets infected with fungi, viruses or bacteria, we develop urinary tract infection (UTI), with bacteria being the most common cause.

Most UTIs are caused by the bacteria present in the bowel, such as E. coli. Some other bacteria like, Chlamydia and Mycoplasma can be sexually transmitted and cause infection in urethra or reproductive organs.

Women are more prone to UTI than men due to the anatomical reasons, as microbes can reach easily into the urinary tract of women.

The common symptoms of UTI are frequent urge to urinate, burning sensation in the bladder or urethra during urination,a small amount of urine, abdominal pain, fever, foul smell and dark colour of the urine.

Most of the time UTI is not very serious but if the infection reaches kidneys it could be detrimental. This may lead to kidney damage, high blood pressure etc and sometimes may even be life-threatening.

The infection recurs in a large fraction of UTI cases.

The risk of UTI increases in case of any abnormality related with the urinary tract such as kidney stones, diabetes and lower immunity. The use of certain birth control also elevates the risk.

Catheters or tubes (inserted into the bladder for urine removal) also invite microbes to thrive and may lead to infection. Pregnant women are at a risk during the initial few months.

The treatment of UTI is done through antibiotics and antimicrobials. The duration of treatment depends on the severity of infection, i.e. 2-4 days for normal infection while around 6 months or longer for recurrent infection.

Drinking plenty of water, changing urination habits and proper hygiene are also important to avoid the infection.
Since, the antibiotic resistance is on the rise and often antibiotics cause many side effects (allergy, diarrhoea, vomiting etc), the need for natural alternatives are felt.

Turmeric is considered one such natural alternative which can be effective in the treatment of UTI.

Turmeric is a well known spice of the old world. Curcuma longa or turmeric is a modified underground stem (rhizome) belonging to the family Zingiberaceae.

It has been used as a flavouring-agent and colouring-agent in various cuisines of the world, particularly Asia. It has also been an important ingredient of the traditional medicines.

Turmeric is known for a number of medicinal properties such as antimicrobial, anti-inflammatory, antioxidant, immune-stimulatory etc. These properties are inflicted on turmeric by a variety of biological compounds.

Curcumin is one of the bioactive agents present in turmeric that has received a lot of focus in terms of research in relation to various health conditions.

The biological properties, especially the antimicrobial activity of turmeric is known to be remarkably beneficial in case of infections. The other activities add on to provide further benefits

The other bacteria include Staphylococcus species, Pseudomonas aeruginosa etc.

Turmeric is known for its anti-bacterial activity. It has been found to inhibit the growth of bacteria such as E. coli and Staphylococcus.

The constituents of turmeric that possess this anti-bacterial activity are curcumin and volatile oils like, turmerone and curlone.

These compounds inhibit the bacterial growth by damaging the cell membrane of the bacteria, resulting in their death.

Curcumin is found to prevent assembly of a protein FtsZ (involved in bacterial cell division) which leads to inhibition of the growth.

Virus (adenovirus, cytomegalovirus etc.) and fungi such as Candida are also known to cause UTIs.

Turmeric possesses activity against these pathogens as well. It has significant anti-viral and anti-fungal activity.

What does it mean?
It means consumption of turmeric can prevent the growth of the pathogens in the urinary tract. The antimicrobial activity of turmeric is capable of restricting the growth of a wide range of microorganisms including bacteria, virus and fungi.

2. Turmeric prevents the growth of uropathogens

The role of cell to cell communication is an important aspect of bacterial infections. This process is called as quorum sensing.

Quorum sensing helps bacteria to change its genetic expressions in order to release virulence factors or the molecules that help in their colonization on a host.

In the case of UTIs, quorum sensing is involved in the infection by bacteria such as, Pseudomonas aeruginosa. It further leads to biofilm formation.

Curcumin has been found to interfere with the quorum sensing system of the pathogens in UTIs. This disturbs the biofilm and prevents further colonization of these pathogens in the urinary tract.

Curcumin has also been shown to work in synergy with the antibiotics to destroy the biofilms more effectively.

Urinary tract infection often causes inflammation in the kidney or bladder which further leads to pain. Cystitis (inflammation of the bladder) is one of the common pro-inflammatory responses seen upon this infection.

Turmeric is a potent anti-inflammatory agent. It suppresses the pro-inflammatory responses by interfering with many metabolic pathways related to these responses.

Turmeric has been found to be effective against inflammation in various infectious diseases, including UTI.

It has been found to reduce the expression of pro-inflammatory molecules in the kidney in case of UTI, along with other components of an Ayurvedic formulation.

What does it mean?
It means intake of turmeric can be helpful in equipping the body to suppress the inflammatory responses related to the urinary tract infection. 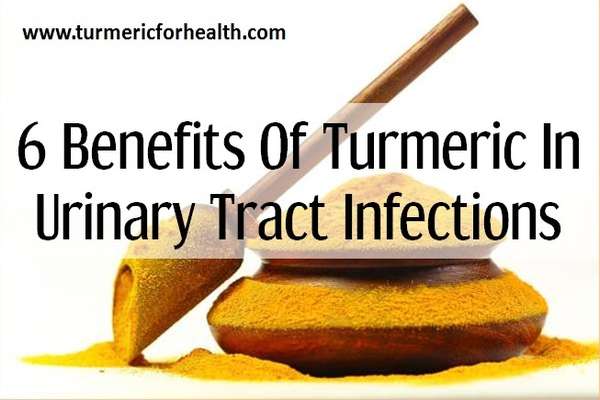 4. Turmeric can prevent recurrence of UTI

Recurrence of UTI is common among the patients of this infection, as high as 25% among the infected individuals.

The cause of the relapse may be the predominance of virulence factor genes, biofilm formation, antimicrobial resistance, multi-drug resistant strains etc.

Turmeric is also capable of preventing recurrence of the UTIs.

In a study, curcumin was found to be effective in preventing the relapse of UTI in postmenopausal women, when used with other therapies. It also reduced the symptoms of the infection.

The combination of various properties of turmeric, such as its antimicrobial action and action aginst biofilm formation, exhibits this effect.

What does it mean?
It means use of turmeric can be an effective measure against recurrent UTI. It can also enhance the effect of therapies adopted to treat the recurrent UTI.

5. Turmeric can boost the immune system

The immune response of the body is a critical defence mechanism against infections. It helps to ward off the extraneous factors such as pathogens that may adversely affect the body.

In the case of UTI as well, the defence mechanism against the uropathogens are compromised which leads to the occurrence of infection.

Turmeric has a property of stimulating the immune system which is carried out by curcumin and its polysaccharide fraction.

These compounds show this activity by suppressing expression various molecules of the immune system while activating expression of some others.

Curcumin is found to enhance the antibody response which helps in preventing the infections through antibody-antigen interactions.

What does it mean?
It means consumption of turmeric has efficacy in boosting the immune system. This is helpful in warding off the infective agents and hence, can prevent UTIs.

Kidney abnormalities are a major life-threatening aspect of UTIs.

The urinary tract infection leads to oxidative stress which has a role in causing damage to the kidney tissues.

Turmeric can cover this aspect of UTI too. Curcumin is known to possess renoprotective action.

The antioxidant action of curcumin can reduce the oxidative stress associated with the renal injury caused by many factors, including infections. This helps in prevention of kidney tissues against damage.

What does it mean?
It means consumption of turmeric can protect kidneys from the damage caused as a result of UTI. The antioxidant action can relieve the oxidative stress and prevent the kidney damage.

Dosage of Turmeric for UTI 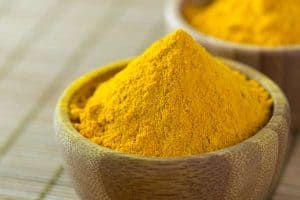 There is no specific dose of turmeric prescribed as such in case of UTI. Turmeric is known as a safe dietary product and its consumption can be beneficial in this disease.

However, turmeric is known to have a poor absorption in the body. (Read How to improve turmeric’s bioavailability?)

To increase the absorption of turmeric in the body, it can be taken in the form of Golden Paste (it has black pepper and other oils in addition to turmeric).

Consumption of turmeric in on an empty stomach should be avoided. (Read Does Turmeric cause acid reflux?)

Turmeric intake should also be avoided at the same time of taking medications. It is better to maintain a gap of 3-4 hours. (Read Black pepper in GP: Does it cause drug interaction?)

Optimal turmeric dosage differs from one person to another; some may need less while some more. The dosage depends on what suits an individual and what dosage is tolerated by the stomach.

Turmeric can be consumed in a delicious way as Turmeric milk and Turmeric tea.

To find some good organic brands of turmeric, check our recommendation on best organic turmeric brands.

Turmeric supplements can also be used, but the advice of a medical practitioner before their use is important.

Dietary consumption of turmeric is considered very safe. Many cuisines use turmeric on a regular basis, and no reports of its adverse effects have been reported.

Some precautions must be taken especially, when using turmeric supplements. (Read Side effects of Turmeric)

Curcumin found in turmeric interferes in drug metabolism activity. Hence curcumin supplements should not be taken concomitantly with medicines.

Turmeric should be taken in a limited amount by the people at risk of gout or kidney stones.
Overuse of turmeric is known to elevate the risk of developing kidney stones and can intensify gout. (Read Is turmeric safe in gout? Does turmeric cause kidney stones?)

Turmeric can cause blood thinning which may pose difficulty in blood clotting after surgery. Therefore, turmeric supplement consumption should be discontinued around 2 weeks prior to a surgery.

However, use of turmeric in diet is safe which can be substantiated by the fact that pregnant and breastfeeding women of the countries such as India regularly take turmeric in their diet and face no adversity due to this.

Turmeric is a very beneficial natural product against the urinary tract infections.

Various biological properties of turmeric are useful against a number of aspects of the UTIs.

The antimicrobial, anti-quorum sensing, anti-inflammatory, antioxidant and immune-stimulating actions of turmeric help in prevention as well as treatment of this infection.

Moreover, the recurrence and damaging effects of UTI on the kidney can also be tackled by turmeric, adding on to its benefits.