Turmeric is a herb with strong anti-coagulating and anti-platelet effects as well. The question is can we use turmeric as a supplement together with Plavix for better health effects?

Dietary consumption of turmeric is safe with Plavix, but turmeric in high doses or curcumin supplements is not recommended along with regular Plavix therapy.

As per research, there are possible drug-herb interactions between Plavix and turmeric. Turmeric may aggravate the effects of the drug.

Also, a gap of 3-4 hours is advised between taking turmeric (as part of the diet as a spice) with Plavix.

Let us discuss in more detail possible issues when turmeric / curcumin is taken along with Plavix / Clopidogrel. 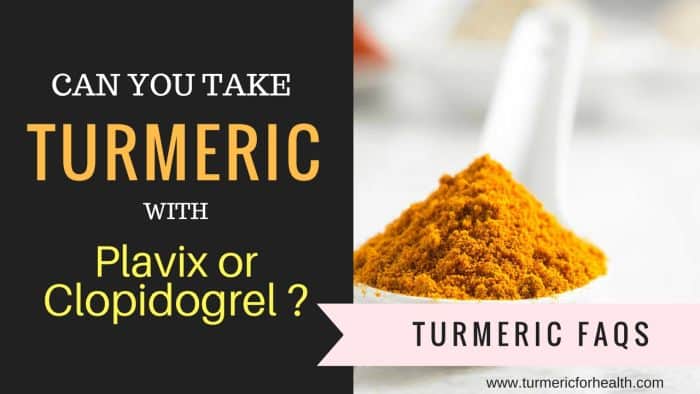 Turmeric is also an effective anticoagulant

Research says this makes it beneficial for treating cardiovascular disorders like atherosclerosis, ischemia, and stroke.[1] [2] [3]

Thus, the potential of turmeric to be used as a complementary medicine or an adjuvant with Plavix for the prevention of atherosclerosis and stroke cannot be neglected. [4] [5]

Turmeric is safer than Plavix

Turmeric and curcumin are natural products, entirely safe and well tolerated, even in high doses. [6]

Unlike Plavix, which poses risks of side effects, turmeric and curcumin do not have any severe adverse effects on health.

.. But Turmeric with Plavix may have aggravated effects

Turmeric and Plavix have similar properties of inhibition of blood clot formation. Coadministration of turmeric (in large amounts or supplemental dose) with Plavix may increase the antiplatelet effect. [7]

Studies have shown that turmeric interacts with anti-coagulants and antiplatelet agents. This interaction is synergistic which results in increased effects of the drug. [8]

Due to its anti-thrombotic effect, Plavix poses a risk of increased bleeding, including internal, gastrointestinal and cerebral bleeding in some individuals. Turmeric, which also has blood-thinning effects, if taken with the drug may further aggravate these side effects. [9]

How to avoid this: Dietary turmeric might not have such effects as it contains curcumin in small amounts. When taking turmeric/curcumin supplements together with Plavix, consult with your healthcare professional about the proper doses of the drug and turmeric.

Adjusting the dosages or decreasing the potency of the drug and turmeric may be beneficial. However, this depends greatly on one’s health condition.

.. Also – Turmeric may affect Plavix metabolism in the body

As per research, turmeric interferes with the metabolism of certain drugs, particularly those metabolised by the Cytochrome P450 enzyme and P-glycoprotein. [10]

It is known that Plavix or clopidogrel is a drug that shows the antiplatelet effect by getting metabolised by the same Cytochrome P450 enzymes. [11]

Curcumin in turmeric is an inhibitor of these drug metabolising proteins. This may alter the functioning and therapeutic effect of the drug.

Inhibition of these enzymes results in decreased drug metabolism. This means that the drug remains in the body for a longer duration and has increased serum concentrations.

Now, there is a specific concentration at which the drug has a therapeutic effect and increased levels may result in toxicity. [12] For turmeric and Plavix, there is insufficient evidence to confirm any of these facts.

Some studies have hinted that this effect of curcumin may improve the efficacy of drugs, but more clinical studies are required. [13]

Curcumin though may affect the drug pharmacokinetics (metabolism, absorption, and distribution), has no adverse effects on drug pharmacodynamics (therapeutic effects).

When these effects were studied in animal models, it was found that curcumin increases the plasma concentrations of the drug, but has no impact on its antiplatelet and anticoagulation effects. [14]

How to avoid this interaction: A gap of 3-4 hours between taking turmeric/curcumin supplements and Plavix is preferred to prevent any unwanted effects. Taking Plavix few hours before turmeric intake may ensure that most of the drug is already metabolized.

Turmeric has several beneficial properties similar to anti-coagulating and anti-platelet drugs. But there are possibilities of interaction between the two and thus, it is best to avoid taking them together.

It is strongly advised to consult a health practitioner before taking turmeric supplements or large amounts of the spice when taking blood-thinning medicines, including Plavix.

13 thoughts on “Can I Take Turmeric / Curcumin & Plavix (Antiplatelet Drugs)”