Quick Answer: Is it safe to take Turmeric / Curcumin with Omeprazole

If Turmeric is taken with omeprazole, it may interfere with the action of omeprazole. Therefore, it is advisable to have turmeric and omeprazole with an interval of a few hours.

Yes, there have been few but significant reports showing that curcumin does interfere / interact with the action of Omeprazole, a gastroprotective drug.

A few researchers have shown that curcumin can interfere with the action of Omeprazole, and hence these drugs should not be taken simultaneously with curcumin / turmeric.

Omeprazole is a chemical compound that aims to reduce gastric acid production by its virtue of being a proton pump inhibitor.

It is available as an over-the-counter pill and its indications include gastroesophageal reflux disease, peptic ulcers, and esophagitis.

It is also used to tackle hypersecretory conditions such as Zollinger-Ellison syndrome, and also as a combination therapy for Helicobacter pylori infection, which is responsible for most of the peptic ulcers.

Does turmeric interact with Omeprazole? 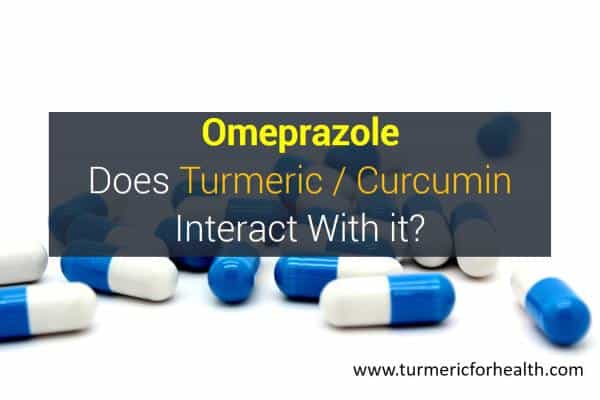 The benefits of turmeric as an anti-ulcer agent have been documented in various animal and human studies.

Turmeric has been shown to not only reduce gastric acid production [1] but also increase gastric mucus production [2] and inhibits the activity of pepsin [3], which promotes healing of gastric ulcers.

As a matter of fact, researchers compared turmeric and Omeprazole directly in 2011 [4] and found that curcumin was relatively more potent in preventing the formation of gastric lesions.

Regarding the efficacy of curcumin for the eradication of H. pylori, there is mixed opinion.

A recent study conducted on humans concluded that although the addition of curcumin to the standard combination therapy (which included Pantoprazole – A proton pump inhibitor similar to Omeprazole) against H. pylori reduces symptoms with no adverse effects, it does not help in bacterial eradication [5].

This was in contrast to a 2009 study that showed curcumin to be highly efficacious in the eradication of H. pylori [6].

Apart from these studies, there has also been evidence suggesting that turmeric interferes with the action of drugs that aim to reduce stomach acid production [7], including Omeprazole.

This might lead to a worsening of the primary condition. Moreover, a 1980 study conducted on rats demonstrated that turmeric ingestion could also lead to ulcer formation [8].

Thus, although turmeric has shown largely promising results in preventing and healing of gastric ulcerations, the general consensus is to avoid administering Omeprazole and turmeric at the same time.

Omeprazole should ideally be taken at least one hour before meals, and turmeric can be taken after meals. It is best to have an interval of a few hours between the intakes of these compounds.

This ensures maximum potency of both compounds, with no interference.

How to Take Turmeric, Dosage and General Precautions

If you are new to turmeric and curcumin, please do read the article to understand its vast health benefits – 100 Ways Turmeric can Help your Health.

Turmeric is best taken by including it as part of your diet and daily life. Here are few excellent ways to do so:

If you plan to take turmeric / curcumin supplements, here a quick guide about which types of supplements are available and best brands>

It is important that you also understand key precautions while taking turmeric, there are conditions when it should not be taken>

In case you have any queries or want to share feedback regarding turmeric / curcumin, please feel free to comment below.

Does turmeric have anti-ulcer activities?

Several studies have shown that turmeric/ curcumin has anti-gastric ulcer effects. It may inhibit gastric acid secretion, reduce gastric juice acidity, inhibit pepsin activity, and promote the healing of the ulcer. It may also increase the gastric wall mucus.

Is curcumin protectant against different esophageal and gastric disorders?

Curcumin may protect against reflux esophagitis, Barrett’s esophagus, and gastric mucosal damage induced by NSAIDs. It may inhibit the invasion and proliferation of gastric cancer cells. It may also have a role as an adjuvant in treating a Helicobacter pylori infection. However, more studies are required.

Is the anti-ulcer activity of curcumin comparable to omeprazole?

3 thoughts on “Omeprazole (GERD): Does Turmeric / Curcumin Interact With it?”