Till recent times turmeric has been famous for its flavour and color. The world of research is now aware of its pharmaceutical properties and our amazing readers like you are making use of turmeric’s medicinal properties.

Curcumin contributes most to turmeric’s medicinal properties. It imparts the orange hue to the spice. Curcumin accounts for 2-5% of the rhizome content.

Since most of the research has been done in relation to curcumin and various diseases, it is important to note that most studies have made use of curcumin supplements or purified turmeric extract.

Therefore the amount of curcumin used in the trial is around 100 times more than what you get from dietary turmeric. Combination of black pepper and turmeric leads to a 2000% increase in bioavailability which would be equivalent to consuming 27-29 cups of turmeric powder.

Now is that amount of curcumin safe for everyone? Also how long can this supplementation be safe?

Most clinical trials have used curcumin supplementation for 6-9 months without significant adverse effects. Also doses up to 8g of turmeric have found to be safe in healthy individuals.

Who should avoid turmeric or turmeric/curcumin supplements?

We generally advocate the use of dietary turmeric or The Golden Paste, since it gives you more than just curcumin and the amount of curcumin you receive is in moderation. Turmeric supplements are to be taken only when advised by a doctor for some chronic condition and that too not for long time period.

However some individuals should avoid consuming turmeric supplements or rather exercise caution while consuming it.

Turmeric is one of the herbs which are used in female healthcare. Traditionally turmeric is said to work as a uterine stimulant which is why it is used to regularize menstruation.

But no study till date proves this effect and this is the prime reason why turmeric supplements which are concentrated versions of curcumin should be avoided in pregnancy.

A few animal studies show that curcumin may have adverse effect in fertility and pregnancy while one suggests that it may aid in treatment of gestational disorder. No studies in humans have proven this. And it is important to note that this effect is attributed to curcumin and the effect could be dose dependant.

It can be safely concluded that turmeric in diet would be safe for pregnancy and lactation and its best to avoid curcumin supplements in this case.

Gall bladder is the organ that contributes to digestive fluids. Gallstones are deposits that obstruct bile passages in gall bladder leading to significant abdominal pain.

For healthy individuals these results are not worrisome, since they indicate that curcumin brings about emptying of gall bladder and prevents gallstone formation. But if you already suffer from gall stones, this type of contraction can cause severe pain.

What does this mean?
Curcumin prevents gall stone formation. But if you already suffer from gallstones avoid curcumin supplements as it may cause the gall bladder to contract and cause severe pain. 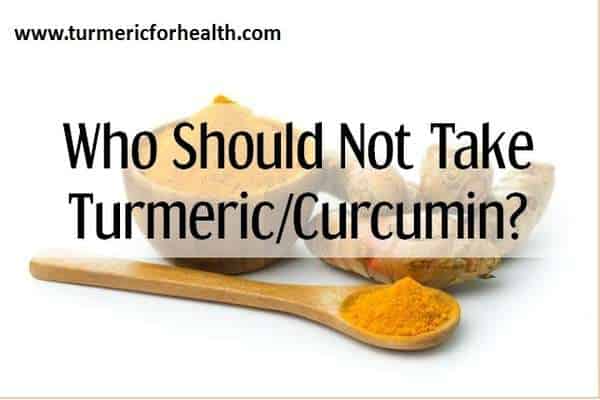 Our body contains various enzymes and proteins that influence drug metabolism and detoxification. Research proves that curcumin interacts with these same enzyme and proteins that metabolize various medications and therefore could pose a risk for drug interaction.

Curcumin may have interactions with over the counter drugs and painkillers.

Volak et. al report that curcuminoid- black pepper combination does not affect the concentration or activity of certain drugs including paracetamol. Others suggest interactions with drugs such as Vitamin K antagonists, immunosuppressants etc.

Based on this data, we can conclude that turmeric supplements should not be taken in combination with any other drug.

What does this mean?
Curcumin interacts with the same enzymes that metabolize and detoxify drugs and hence could cause drug interactions. Avoid taking curcumin supplements with any other medications. Maintain a 3-4 hour gap. Also consult your health practitioner before taking turmeric supplements.

Turmeric has high contents of a compound named oxalates which bind to calcium in the body and give rise to kidney stones. Individuals who are at a high risk of developing kidney stones should limit oxalate consumption to 40 – 50mg a day.

A study was conducted wherein they studied whether oxalate content of these spices outweighs the benefits provided by these spices. Individuals were given supplemental doses of turmeric and cinnamon which provided 55mg of oxalate per day.

Hyperoxaluria is high excretion of oxalic acid via urine. It is defined as urine oxalate excretion that exceeds 40 mg every 24 h. It was observed that rate of oxalate absorption was 8.2 % in turmeric with soluble oxalate rate being 91% but urinary oxalate excretion was 29 mg for turmeric which is below standard cut off.

Those who are at the risk of developing kidney stones should take turmeric powder in moderation since the oxalate content of turmeric may impair kidney health. Interestingly an animal study shows that curcumin can prevent kidney stone formation.

Those who suffer from gout are at high risk of developing kidney stones. So if they want use turmeric to treat inflammation they might as well take curcumin supplements since the amount of spice they would require to consume would contain too much oxalate.

Taking turmeric with black pepper and fats increases the absorption of curcumin in the body. The Golden Paste is a healthy way of taking turmeric. 1-2 teaspoons once or twice a day should help. You can even make Golden Paste from fresh turmeric roots.

Here are 10 ways you could use The Golden Paste. Turmeric Milk is another delicious way of taking turmeric. If you need help deciding a good brand of organic turmeric powder please check our recommendations on best turmeric brands.

Turmeric supplements are not advisable for everybody. They should be avoided by those who are taking certain medications, those who suffer from gallstones and during pregnancy and lactation.

Turmeric powder in excess could also cause gastric discomfort and increase risk for kidney stone formation. In conclusion, it would be appropriate to say that turmeric though therapeutic works best in moderation.

30 thoughts on “Who Should Not Take Turmeric/Curcumin?”