A usual perception that we live with is that raw food is healthy food.

Nutritional content of fruits and vegetables is mainly assessed once they are harvested and those figures typically depict the item to be nutrient dense.

The myth that cooking, mainly heating, destroys the nutrients in the food is still rampant.

Part of this myth is in fact true cooking does affect nutritional content of every food item.

Vitamins and minerals are the main components that are lost during cooking.

Average cooking techniques utilised at home lead to a loss of 15-55% of Vitamin C. Around 30-40% minerals are lost during cooking.

Highest losses occur by squeezing after boiling and by soaking in water followed by parching, stewing and frying.

Deep frying and barbecuing not only cause vitamin loss but also lead to formation of cancer-causing agents.

Yet cooking is a highly necessary technique when it comes to improving palatability of the food.

Eating cooked veggies is better than eating no veggies! Cooking leads to a limited loss of some nutrients and increases the bioavailability of other nutrients.

Some cooking methods such as microwave cooking have minimal effects on nutritional quality.

Are turmeric and black pepper’s benefits lost while cooking?

No,w why am I suddenly concerned about nutritional losses occurring during cooking?

An avid reader that I am I keep stumbling across various pieces of information regarding turmeric and boy, they are confusing at times!!

Now this my latest find: A research study was conducted to evaluate the loss of bioactive ingredients of turmeric, red pepper and black pepper namely curcumin, capsaicin and piperine.

They were subjected to heat similar to those occurring in domestic cooking processes.

They were either boiled for 10 or 20 minutes or pressure cooked for 10 minutes.

Around 27-53% of curcumin was lost by heat processing of turmeric and major loss was observed by pressure cooking. Loss of piperine was around 16-34%.

The study led to a conclusion that cooking spices lead to loss of their bioactive ingredients. Another study also comments on the same idea.

This study demonstrated a loss of 85% of curcumin within 15-30 minutes of cooking.

Now this amazed me. Till date we have been suggesting various recipes to incorporate turmeric and they involve cooking…so do these studies negate our beliefs that cooking turmeric increases its absorption?

Now there are a few things we don’t know about the studies like how was the turmeric cooked, whether turmeric powder was used or roots, were other ingredients included etc.

So we cant completely accept or deny the results. But this gives us a basic idea that certain quantity of curcumin and piperine, active ingredients of turmeric and black pepper are lost on cooking.

What do other researchers have to say about this?

So, what’s next? Well we decided to put on our investigating feelers and detect what other studies say about the heat stability of curcumin and turmeric.

Curcumin in turmeric is sensitive to heat

Research proves that when using curcumin as a food coloring agent, the food processing temperature should not go above 190°C.

An experimental study was conducted wherein the thermal stability of different natural yellow colorants used in food was studied.

Temperature range was from 30-90°C and time for heat exposure was 6 hours! The color degraded with increase in temperature and curcumin was found to have intermediate thermal stability. 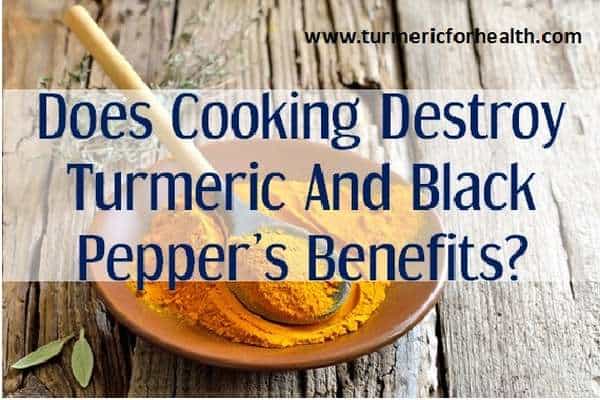 So does loss of curcumin from turmeric mean loss of medicinal properties?

So curcumin is not stable at high temperatures, but does that mean its pharmacological properties are lost?

In fact, research proves that the antioxidant power of turmeric increases with boiling and roasting in comparison to raw turmeric.

In a study, curcumin was roasted at 180°C up to 70 minutes. Its degradation products included vanillin, ferulic acid, and 4-vinyl guaiacol.

When tested for its biological activity, 4-vinyl guaiacol increased antioxidant defenses by inducing activity of antioxidant enzymes and it also lowered the production of pro-inflammatory agents in immune cells.

This shows that heat may breakdown curcumin but its anti-inflammatory and antioxidant properties are unaffected.

Vanillin and ferullic acid are produced at around 50-60°C. Both of these products show significant anti-cancer activity.

They also suppress the activity of nuclear factor-kappa B and COX enzymes which are key players in the inflammatory process.

Despite turmeric’s low bioavailability, Asian countries have a lower incidence of cancer.

Could this be linked to the inclusion of turmeric in diet and if yes does cooking modify turmeric’s anti-cancer activity.

A study demonstrated that curcumin is broken down at high temperatures and one of its decomposition products are deketene curcumin.

This compound is far more toxic to cancerous cells than curcumin itself. So cooking actually increases curcumin’s anti-cancer activity!

Heat solubilized curcumin inhibits the formation of oxidation products by 80%. Curcumin in heated oil protects the liver from oxidative damage.

Most studies investigate the effect of curcumin by exposing the cells to it but dietary turmeric can also reduce the risk of cancer.

Hot water extract of turmeric is stronger than vitamin C when it comes to antioxidant activity.

What happened to the ‘Heating increases turmeric’s bioavailability’ notion?

Including turmeric in food and cooking, it increases its bioavailability.

A study evaluating this point, demonstrated the difference in curcumin’s properties when exposed to oil in water preparations.

Temperatures selected were 30 °C and 100 °C to create conditions similar to that of salad dressings and cooking sauces.

Interestingly, curcumin was found to be more soluble and stable in the preparations at 100°C rather than 30°C.

Total curcumin available in the gastrointestinal tract increased as the oil in water emulsions protected it from degradation.

This study depicts the idea that at higher temperatures curcumin is made more bioavailable.

The solubility of curcumin in water is proven to increase by 12 folds and turmeric by 3 folds when it is heated.

A study shows that heat solubilised curcumin can prevent antibody-antigen binding a hallmark of autoimmune conditions and in this study, curcumin was boiled in water for 10 minutes but it still showed pharmacological action.

So these studies do depict that curcumin’s bioavailability increases with heating.

What about piperine in black pepper?

Not much data is accessible when it comes to the thermal stability of piperine, but here are some points that we would like to mention:

The purpose behind presenting these points is that heating may lead to loss of piperine but it also destroys the harmful content of spices.

Here are a few tips that could minimize cooking losses of curcumin:

So it is true that curcumin and piperine, active ingredients of turmeric and black pepper are lost when heated. But the good news is that the pharmacological properties are not lost.

Spices are heat resistant. Back in India spices are dry roasted before using them in food and sometimes they are even sun-dried to get rid of toxins and bacteria.

In the case of turmeric, the degradation products show equivalent or better action than curcumin.

And pepper can lose its flavor by storage and grinding just as it would occur during cooking.

So you don’t need to worry about whether you will lose all the healthy stuff from spices when you cook it.

48 thoughts on “Does Cooking destroy Turmeric and Black Pepper’s Benefits?”