Smoking has been a common practice for more than a century now.

Even though it has lethal side-effects, there has been no decrease in the number of people smoking. Instead, the number has been growing regularity.

Smoking is inhaling the smoke from a burnt substance like tobacco.

The dried leaves of tobacco are smoked in the form of a cigarette, hookah, pipe, cigar, etc. In the case of cigarettes, tobacco is mixed with aerosol particles and nicotine.

On smoking, these aerosols are heated along with tobacco and nicotine and inhaled deep into the lungs. In the lungs, these harmful components are absorbed into the bloodstream.

Nicotine is a stimulant compound found in tobacco plant (Nicotiana tabacum) and related plants. 0.6-3% of tobacco is made up of nicotine and an average cigarette provides 2mg of nicotine that can be absorbed.

Nicotine is one of the principal components of cigarette smoke.

It is an addictive substance which affects the brain reward system.

When nicotine enters the blood from the lungs, it raises blood pressure, constricts the arteries and reduces oxygen supply.

Nicotine also causes inflammation and spasm in the muscles of the airway leading to asthma and inflammatory conditions like chronic obstructive pulmonary disorder.

Nicotine does not cause lung cancer but it protects and enhances the growth of lung cancer cells.

Curcumin present in turmeric has strong antioxidant, anti-inflammatory and anti-cancer properties which it utilises to protect lungs from nicotine-induced damage.

Nicotine-induced lung toxicity impairs the antioxidant status of the body. This is marked by a decrease in antioxidant enzymes and increased lipid peroxidation.

Lipid peroxidation is a natural process occurring in the body but when it is uncontrolled it causes disease and damage.

It is the destruction of essential fats present in the cell membrane by reactive oxygen species which leads to cell death and tissue damage.

Animal study shows that curcumin and its related compound reduce lipid peroxidation and raise the level of antioxidant enzymes while restoring minerals to normal levels.

This entire phenomenon is known as oxidative stress (imbalance between prooxidant and antioxidant agents).

Curcumin, as an antioxidant, ameliorates such as nicotine-induced oxidative stress.

What does this mean?
Curcumin is a strong antioxidant and it uses this pharmacological property in protecting lungs from nicotine induced oxidative damage.

Chronic obstructive pulmonary disease is a condition wherein the lung is damaged leading to obstruction and difficulty in breathing.

Not only cigarette smoke exposure but the accumulation of bacteria in the airway can also cause accumulation.

Curcumin reduces such inflammation and activation and migration of immune cells to lung fluid. It also prevents tumor formation in such cases.

Emphysema is a condition in which the tiny air sacs that present in the lung (these filter the air and help blood absorb oxygen) known as alveoli are damaged. Cigarette smoke can cause inflammation and emphysema.

In an animal study, curcumin was found to attenuate curcumin-induced migration of immune cells to fluids present in the lung. It also reduced inflammation and emphysema caused by cigarette smoke.

What does this mean?
Cigarette smoke can cause inflammation and obstruction in the airway. Curcumin protects from development of such inflammatory diseases of the lung like COPD. 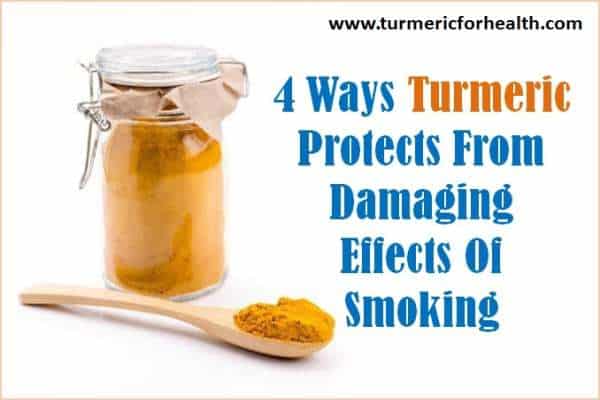 3.It prevents lung damage from progressing into cancer

90% of the lung cancer is caused by cigarette smoke. Cigarette smoke has a number of components that are carcinogens or cancer-causing.

Nicotine is responsible for addiction but is not a carcinogen. However, it does support cancerous cell growth and angiogenesis. (Read Turmeric & Angiogenesis)

Benzo[a]pyrene is a strong carcinogen present in cigarette smoke. It promotes tumor formation by activation of a protein named nuclear factor-kappaB.

This protein plays an important role in inflammation and cell growth. Its activation can block apoptosis and stimulate proliferation.

A cell culture study showed that curcumin prevents such activation of nuclear factor-kappaB and its related genes in lung cancer cells, thereby preventing the progression of lung cancer.

Curcumin suppresses a number of other biological agents in order to prevent benzo[a]pyrene induced cancer formation.

What does this mean?
Curcumin protects the lung from carcinogens present in cigarette smoke and prevents development of lung cancer.

4.It protects other organs from cigarette smoke-induced toxicity

It is also found to reverse the detrimental effects caused by smoking on blood-related parameters and prevent clot formation. A recent study published in the Turkish Journal Of Medical Sciences, 2016 shows that curcumin protects from testicular injury caused by nicotine addiction.

What does this mean?
Curcumin in turmeric protects other organs from smoking induced toxicity. It also protects from DNA damage caused by nicotine.

The dosage of Turmeric For Protection From Smoking-Induced Damage

Turmeric in diet can help improve an antioxidant defense. You can simply sprinkle turmeric in salads, soups, smoothies or use it in cooking.

Curcumin in turmeric is poorly absorbed in the body.

Taking turmeric with black pepper and oil increases the absorption. Golden Paste combines these 3 elements making it an effective way of taking turmeric.

Start with small doses say ¼-1/2 tsp and increase gradually if no side effects are observed. The recommended dose is 1-2 tsp 2-3 times a day (precisely 1 tsp 3 times a day).

Turmeric in diet is safe but a few precautions need to be noted. (Read Side effects of turmeric)

So if suffering from bleeding risk or taking blood thinners, consult a health practitioner before taking turmeric.

Also if scheduled for surgery, it is advised to discontinue turmeric supplements 2 weeks prior to surgery to avoid bleeding risks.

Turmeric as a spice is high in oxalates. Therefore one should limit its intake in gout and kidney stones. (Read Does Turmeric Cause Kidney Stones?) In such cases, one can opt for curcumin supplements after a doctor’s consent.

Curcumin in turmeric interferes in drug metabolism. Hence it is advised not to take turmeric supplements concomitantly with any medication.

Maintain a 3-4 hour gap. It is best to consult a health practitioner about turmeric supplements.

Nicotine is one of the most harmful substances present in cigarette smoke that causes damage to lung tissue. This can further progress into debilitating conditions like COPD and lung cancer.

Turmeric and Curcumin can serve as add-on therapy in protecting the lungs from nicotine-induced damage.

Also, they are proven to protect other organs and overall health from the damaging effects of smoking.