Turmeric has biological properties that may help with Chronic Obstructive Pulmonary Disease (COPD). It reduces inflammation and emphysema associated with COPD. It decreases oxidative stress and reverses the resistance to steroid treatment in COPD patients. It may clear congestion, blockage of the respiratory tract and prevent the progression of COPD into lung cancer. It is preferable to consult a doctor before taking turmeric.

COPD or chronic obstructive pulmonary disease is a disease that affects the respiratory system. It is said to be the third leading cause of death in the US.

Cigarette smoking is the leading cause of COPD. Other lung irritants like smoke, chemical fumes and dust can also cause COPD.

The main symptom of COPD is difficulty in breathing. COPD consists of two conditions:

Inflammation of the airway leads to accumulation of mucus and narrows the airway thus causing difficulty in breathing.

Coughing, green sputum and recurrent infections are some of the symptoms. It is a progressive disease which can further lead to pneumonia, lung cancer, and heart disease.

However, the condition is treatable and includes lifestyle changes like quitting smoking and using bronchodilators and steroids.

Turmeric is a spice native to India and has been a herb that is revered in traditional medicinal systems like Ayurveda.

This article goes over the scientific evidence that suggests that turmeric can help with COPD.

How can turmeric help in treating COPD?

Turmeric milk is one of the age-old remedies that is very popular in India which suggests that turmeric is useful in the treatment of respiratory disorders.

One of the most important pharmacological properties of turmeric is that it is an anti-inflammatory agent.

Inflammation is generally an immune response when body if fighting an infection or repairing tissue.

But most illnesses also give rise to inflammation which needs to be controlled and treated.

Inflammation is the characteristic feature of COPD and cigarette smoking is one of the leading causes of COPD.

Certain compounds present in cigarette smoke activate a protein called nuclear factor-kappa B which controls the entire inflammation process. Studies show that curcumin inhibits the activity of this protein in normal as well as cancerous lung cells.

Emphysema is a common condition of COPD. An animal study was conducted where emphysema-like condition was induced by exposing animals to cigarette smoke or allergen.

Oral curcumin was found to reduce emphysema, inflammation, and migration of immune cells to airway within 10 days of administration.

A number of studies suggest that turmeric can serve as a potential natural anti-inflammatory agent in treating airway inflammation. Curcumin nanoparticles are also proven to reduce inflammation in respiratory disease.

What does this mean?
Turmeric reduces inflammation and emphysema both of which are the main features of COPD.

COPD is also characterized by oxidative stress which is an imbalance between prooxidants and natural antioxidants found in the body.

The gaseous phase of cigarette smoke also contains radicals like superoxide radicals, hydroxyl radicals, and hydrogen peroxide which cause oxidative damage and give rise to inflammation.

Curcumin acts as an antioxidant and it scavenges free radicals as well as raises the concentration of antioxidant enzymes and thereby alleviates oxidative stress.

Its role as an antioxidant has been implicated in the treatment of COPD.

What does this mean?
Turmeric reduces oxidative stress in COPD and elevates the level of antioxidant enzymes.

Corticosteroids are often recommended in the treatment of COPD.

However, individuals tend to develop resistance to them. An enzyme known as histone deacetylase-2 plays an important role in inflammation.

This enzyme manipulates the activity of nuclear factor kappa B which in turn controls inflammation.

Steroids affect histone deacetylase in order to control inflammation but the activity of these enzymes is altered due to oxidative stress in COPD.

This renders steroid ineffective. Curcumin works like an antioxidant and reverses this resistance.

Studies show that curcumin increases the activity of histone deacetylase-2 enzyme which was impaired by cigarette smoke and improves steroid sensitivity.

Additionally, curcumin has a number of benefits over steroids. To know more about that check out: Why Turmeric Beats Many Steroidal Medications Hands Down

A clinical trial was conducted to assess the safety and efficacy of curcumin as an add-on therapy for bronchial asthma.

What does this mean?
Curcumin reverses the resistance to steroid treatment in COPD patients. 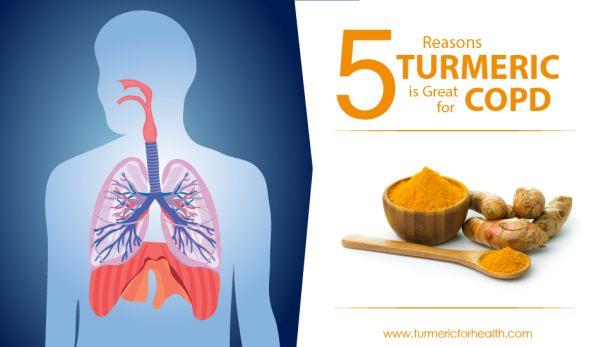 4. It clears blockage of the respiratory tract

There is not enough evidence showing that curcumin reduces airway obstruction in COPD but the same phenomenon has been studied in relation to other respiratory diseases like asthma.

In animal models of chronic asthma, curcumin is found to reduce the accumulation of immune cells to the airway, reduce inflammation and alleviates the obstruction and the narrowing down of the respiratory passage.

These studies suggest that curcumin can be developed as nasal drops to prevent airway inflammation and bronchioconstriction.

Turmeric is proven to have a mild expectorant effect which is useful in treating chronic airway disease. It also alleviates nasal congestion.

What does this mean?
Curcumin has the potential to being developed as nasal drops which can clear congestion and blockage of respiratory tract.

5. It prevents the progression of COPD into lung cancer

The research paper titled ‘Curcumin inhibits COPD-like airway inflammation and lung cancer progression in mice’ particularly focuses on the therapeutic use of curcumin in COPD.

In the study, curcumin was included in the diet prior and during exposure to infection. Curcumin reduced the incidence of lung tumors and also reduce the accumulation of immune cells.

Turmeric extract is proven to inhibit the growth of common organisms that cause a respiratory infection like Haemophilus influenzae, Streptococcus pneumoniae, Streptococcus pyrogene and Staphylococcus aureus etc.

What does this mean?
Curcumin reduces the risk of developing cancer in high risk COPD patients and is also effective in preventing infection.

Also, It may reverse the glucocorticosteroid resistance observed in COPD patients.[2]

A study showed that curcumin might suppress the progression of lung cancer in high-risk COPD patients.[5]

Studies are being conducted to understand the possibilities of curcumin in the treatment/prevention of cancer.[6]

However, more high-quality studies are required to understand the different molecular mechanisms of turmeric in COPD.

The best way to take turmeric is The Golden Paste. It contains black pepper and oil which increases the absorption of curcumin in the body. 1-2 teaspoons of The Golden Paste once or twice a day can help.

Read this to get ideas of how to use The Golden Paste. For more details on good have brands of turmeric powder please check this link.

Turmeric supplements should be avoided in case of pregnancy and lactation. Since turmeric is known to mildly increase bleeding risk, it is advisable to discontinue supplements 2 weeks prior to surgery.

Avoid turmeric supplements if you suffer from gallbladder issues.

Despite increased awareness of the deleterious effect smoking can have on health, people still seem to indulge in smoking and COPD is one of its harmful consequences.

Turmeric shows great promise as an add on therapy for

COPD as it reduces inflammation, clears airway obstruction and prevents infection and progression to lung cancer. Consult your doctor before taking curcumin supplements or start including turmeric in your diet.

Curcumin, the bioactive component of turmeric, may inhibit cigarette smoke (CS)-induced inflammation and oxidative stress due to its anti-inflammatory and antioxidant properties. It may be due to inhibition of nuclear factor (NF)-kB. It also may attenuate cigarette-smoke-induced air space enlargement by inhibiting the increase of neutrophils and macrophages.

Turmeric tea with ginger may help with pulmonary fibrosis due to its anti-inflammatory abilities. However, care should be taken while using turmeric tea with blood thinners and anticoagulants. It may be prepared by combining boiling water, turmeric root, ginger root, coconut oil, and honey. It may be consumed as desired to provide warm relief and comfort.

Does ginger help people with COPD?

Ginger is a rhizome with anti-inflammatory properties that may help reduce inflammation in the lungs. Ginger and its active constituents may attenuate airway hyperresponsiveness and bring about airway smooth muscle relaxation. Also, dried ginger has been shown to warm lungs and relieve cough.