Pulmonary fibrosis is a condition of the lungs in which the lung tissue becomes stiff and thick.

This happens in response to the prolonged damage to the lungs which cause the deposition of excessive amounts of extracellular connective tissue components that lead to thickness.

The disorder causes shortness of breath, dry cough that does not get better, fatigue, weight loss without reason and aching of the muscles and joints.

It is usually caused by scarring of pulmonary tissue due to environmental pollutants, some medicines, connective tissue diseases, smoking, and interstitial lung diseases.

Interstitial lung diseases are a group of diseases that damage or scar the lung tissue.

Benefits of Turmeric in Pulmonary Fibrosis

Turmeric is an ancient herb that has been used for centuries for edible and medicinal purposes.

It is used as a colouring and flavouring agent in curries and other food items. Medically, it is used for treating cold, flu, stomach ache, swelling, bruises, ringworms, eye and skin problems, etc.

Apart from its traditional use, recent research has shown its efficacy in treating several complex disorders like arthritis, different types of cancers, liver and pulmonary fibrosis.

Its therapeutic properties to treat diseases including pulmonary fibrosis are attributed to curcumin, its active ingredient, which is also responsible for its characteristic colour and flavour. 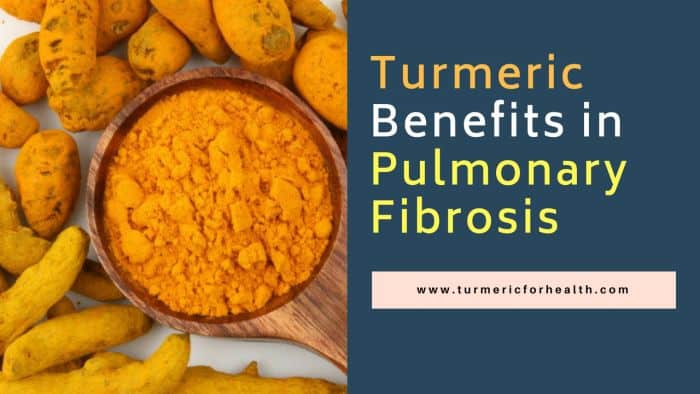 These injuries activate inflammatory reactions and other pathways in the lungs that ultimately cause fibrosis.

Curcumin has been shown to exert protective effects on the lungs so that the harmful damaging agents do not cause injury in the first place. In the experiment, mice were fed with lung-damaging chemicals along with curcumin.

The results revealed the no injury was caused to the lungs despite of feeding large amounts of damaging chemicals.

This proves that curcumin from turmeric prevents the injury to the lungs by day to day chemicals that are taken up by the body.

2. Turmeric inhibits the fibrosis related effects in the lungs

Fibrosis occurs due to the excessive deposition of extracellular material like collagen in the lung tissue.

This deposition occurs in response to damage and in an attempt to correct that damage. However, excessive deposition causes stiffness in the tissue that in advanced stages leads to death.

Several factors are responsible for the induction of fibrosis in the lung tissue. Some of these factors including signalling pathways that are activated upon damage.

Transforming growth factor (TGF) pathway is one such pathway that leads to the growth of the damaged tissue.

Curcumin has been shown to inhibit the signalling pathway of transforming growth factor in the lung tissue which leads to excessive deposition of collagen in the affected organ. Inhibiting TGF in the lungs leads to prevention of fibrosis.

This factor inhibition by curcumin is more prominent in idiopathic pulmonary fibrosis (IPF) which is a chronic type of pulmonary fibrosis in which the reason for the disease is not known and is most probably caused by interstitial lung disease.

Though inflammation occurs in response to damage so that it can be corrected, most illnesses occur due to severely dysregulated inflammation.

In pulmonary fibrosis, dysregulated inflammation doesn’t correct the damage or prevent the diseases, but activates the growth factors and other signalling pathways which lead to excessive deposition of collagen in the extracellular lung tissue, causing fibrosis.

Curcumin has been shown to inhibit several pro-inflammatory molecules which play a major role in disease progression in several diseases.

A few major pro-inflammatory molecules like Cox-2, NF-ƙB, VEGF (vascular endothelial growth factor) and TNF are found as the cause of pulmonary fibrosis.

Curcumin inhibits the activation of TNF in lungs upon damage which in turn prevents the NF-ƙB pathway activation.

The products of NF-ƙB pathway are known to activate growth factors that deposit excessive collagen in the lungs.

Curcumin inhibits the inflammatory molecules in lung tissue which are usually activated upon damage. This prevents the excessive deposition of collagen in the extracellular lung tissue and consequently the unwanted stiffness, characteristic of fibrosis .

Just like inflammation, oxidation, if dysregulated creates havoc in the body.

In lungs, damage induce oxidation causes the release of TGF (transforming growth factor) and other molecules like hydroxy-proline which promote the deposition of collagen in lung tissues.

The oxidation is activated in response to damage in lungs and the process continues with generation of reactive oxygen species like peroxides, nitric oxide, and superoxide anions.

These reactive oxygen species (ROS) react with every good component of the cell and increase the damage.

This increased damage further activates the growth factors and promotes fibrosis-like conditions by attempting to repair the damage.

All these factors collective lead to lung stiffness and thickness, characteristic of fibrosis.

In a study where effects of curcumin on reactive oxygen species were analyzed, it was found that curcumin significantly inhibited the production of peroxides and superoxide anions.

It also inhibited the enzymes that activated the production of these reactive oxygen species, thus showing antioxidant effects.

Curcumin from turmeric inhibits the oxidation in the lung tissue which is usually activated upon damage. Prevention of oxidation by its antioxidant effects inhibits the unnecessary deposition of collagen in lungs, thus ameliorating fibrosis.

There are specific types of cells in each organ including lungs which in response to injury, start dividing for repair. These cells are known as fibroblast.

In lungs, when the repair mechanism becomes dysfunctional and gets activated excessively, the fibroblasts increase in large numbers and also secrete collagen which forms the characteristic feature of pulmonary fibrosis.

The fibroblasts in the lungs have been shown to respond to the damage induced growth factors. This leads to their continuous division and increase in number.

All these fibroblasts then secrete their own growth hormones and collagen to continue their division even when the damage has been repaired and secretion of external growth hormones have been stopped.

Curcumin has been shown to induce programmed cell death or apoptosis in the fibroblast cells of the pulmonary tissue.

Not just apoptosis, it also stops the excessive division and secretion of collagen in the extracellular tissue by these cells.

This effect overall helps in reduction of the development of fibrosis and fibrosis-related complications in the lungs in response to damage in pulmonary tissue.

Curcumin from turmeric helps in reduction of growth and division of the cells in lungs that cause fibrosis. Additionally, it induces programmed cell death in these cells so that they cannot secrete factors that promote fibrosis

Turmeric is being used for both edible and medicinal purpose for a very long time now.

its traditional use as a pain relief agent, herbal medication to reduce swelling, bruises, cold, worms, eye problems etc have proven its use without any side effects.

Research has established the amount of turmeric that can be taken for complex diseases like fibrosis, cancer, and arthritis at home for adults.

Since no studies have been done on its use in medicinal amounts on children, its consumption by the younger group of people is not advisable.

Turmeric is not well absorbed in the body which is why its bioavailability for the affected organs is relatively poor as compared to the amounts actually taken.

Thus, to increase its absorption, pepper should be given in small amounts along with it.

Since its use, both traditional and established, turmeric has shown minimum cases of side effects. It is one of the safest herbs known to treat several diseases.

Overconsumption of turmeric can cause slight stomach aches, diarrhoea and kidney stones.

The consumption of turmeric should be stopped at least 2 weeks before scheduled surgery to avoid the risk of bleeding.

Turmeric also decreases blood sugar levels and its consumption in high amounts along with diabetes medicines may cause hypoglycaemia .

Turmeric is one of the safest herbs known to man.

It is known to treat several disorders including cancer and pulmonary fibrosis.

Its active ingredient, curcumin, has potent antioxidant, anti-inflammatory and healing properties which helps in amelioration of lung fibrosis without causing much or any side effects.

Thus, it may be considered as an emerging powerful natural drug to treat pulmonary fibrosis.