For those of you who read our articles on a regular basis are now clearly aware that turmeric’s pharmacological efficacy is profoundly affected by its bioavailability / absorption.

The spice has over 100 compounds which have medicinal properties ranging from anti-inflammatory to anti-cancer etc.

Curcumin is the principal bioactive compound of turmeric and most research is organized around it. Curcumin accounts for 2-5% of natural turmeric powder’s composition.

So that means you have to take a large amount of turmeric powder to obtain an effective dose of curcumin.

So what do you do next? You then think of taking 95% pure curcumin powder. But does that do the trick? Not really, right?

Well, there are two reasons for it: one that Turmeric is more than just curcumin and the second is bioavailability.

Bioavailability is how a nutrient gets detached from the food, gets absorbed by intestines, enters the bloodstream and reaches the target cells.

This is attributed to poor absorption, active metabolism and rapid excretion from the system.

Time and again I have been saying that it is preferable to take natural turmeric than going for supplements.

Here is one study which evaluates the bioavailability / absorption of turmeric and curcumin in terms of their immunomodulatory and anti-inflammatory property. In this study, rats were fed curcumin or turmeric as a part of their diet.

Interestingly turmeric increased the level of pro-inflammatory agents better than curcumin diet, suggesting that turmeric is more bioavailable than curcumin.

Another study demonstrates that curcumin when tested in an experimental gastrointestinal model, is almost zilch.

However, the same model was used to assess the availability of tumerones and curcumin and this experiment proved that tumerones effectively improve curcumin’s absorption and protect it from drug-metabolizing enzymes.

So I guess this answers the question. Turmeric as a whole is better than curcumin because turmeric oil improves the bioavailability of curcumin and has medicinal value.

Sorry to burst your bubble, but no, taking curcumin powder alone will not solve the bioavailability / absorption problem.

What are the possible barriers turmeric has to overcome before acting medicinally?

Like every other nutrient that enters our body, turmeric has to face a number of hurdles before it reaches the desired organ:

How does black pepper help in increasing turmeric’s bioavailability?

Apart from giving the spice its pungent taste, piperine is known to enhance bioavailability of many drugs.

You must be aware of the study that states that piperine at 20mg increases the bioavailability of curcumin by 2000%. Let’s find out how?

There are supposedly two ways by which piperine enhances bioavailability / absorption: 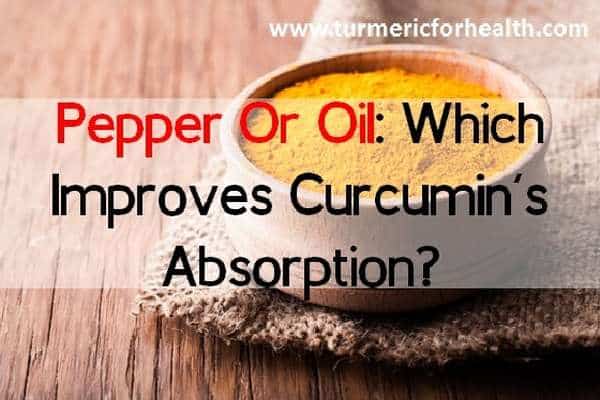 The permeability of each cell is a function of many factors like the nature of the compound entering it, the enzymes present and the acidic or alkaline environment.

This is the first defense mechanism that cells have to avoid an unnecessary invasion of foreign substances.

Studies show that piperine alters intestinal permeability ( the mechanism by which drugs are absorbed by the intestine) in animal models.

Gamma-glutamyl transpeptidase is an enzyme that plays a vital role in drug metabolism and transfer of compounds across the cell membrane (a thin coating around each cell that regulates entry and release of compounds in the cell).

Piperine increases the activity of this enzyme to increase the permeability of intestinal cells.

Piperine also alters the environment in the intestines such that it is conducive to absorption of drugs.

It is absorbed rapidly across the intestinal barrier and it forms complexes with drugs enabling rapid absorption.

It even changes the microscopic structure of the intestinal wall to facilitate better absorption.

After being absorbed from the intestines, piperine and its partners basically the drug molecules are transferred to the liver where they undergo a series of drug transformation or detoxification reactions.

They are 3 phases of detox and they mostly take place in the liver but can occur in other organs as well.

Piperine inhibits the activity of phase I and II enzymes thus contributing to its bioenhancer activity.

Here is a list of few enzymes and proteins involved in drug metabolism that it inhibits :

So it is definitely clear that piperine can effectively transport curcumin and turmeric across the intestinal barrier and protects it from drug metabolizing enzymes.

Every time I consume turmeric does the pepper have to be freshly ground?

Yes, the pepper has to be freshly ground. In India, peppercorns are stored and ground freshly.

Also, they are added just in the end because excessive cooking may make it lose its flavour.

Storage of ground pepper definitely makes it lose its flavour and we know piperine is one of the most important constituents of black pepper that imparts pungency and flavour to the spice.

What is the role of fats in turmeric’s bioavailability / absorption?

Ayurveda recommends taking turmeric with ghee, a type of butter and definitely there must be some reason behind it.

Remember doctors always suggest taking medicines after a meal. That is because food plays a major role in the absorption of drugs.

Lipid (fats and oils) is an essential component of food that enhances the bioavailability of drugs. Indians take turmeric as a part of curries which definitely have good proportions of oil.

Here are a few ways by which lipids enhance bioavailability :

Various lipid-based formulations have been devised for curcumin such as liposomes, micelles, self-emulsifying systems, lipid nanoparticles, etc and these have to increase bioavailability 30 to 50 times more than unformulated curcuminoids.

An experimental study reports that curcumin solubilized in an emulsion made from corn oil and water is highly bioaccessible suggesting the use of food emulsions (combination of oil and water) for drug delivery.

Soyabean oil is also thought of as viable carrier that can increase curcumin uptake in the body.

Curcumin in combination with emu oil is demonstrated to have strong anti-inflammatory effects and this is due to its increased bioavailability (5.2 times more bioavailable than the aqueous extract of curcumin).

The reason behind quoting these studies is to inform you that you need not to go for sophisticated company manufactured lipid formulations of drugs. Simply cooking turmeric with oil should do the trick.

Fats / oils / Lipids have a different mechanism than piperine in increasing systemic availability of curcumin and turmeric but it definitely increases availability by several folds than unformulated turmeric.

There are many ways to increase bioavailability / absorption of turmeric but the reason why we chose fats / oils and turmeric is that these are things you can do at home.

If you have gone through the recipe of the Golden Paste you must have realized that it includes black pepper and oil both of which can make turmeric more bioavailable.

Due to the different mechanisms involved you can’t really judge which technique is better though commercial lipid based formulations claim to increase bioavailability / absorption by 30-50 folds than unformulated curcumin while pepper increases absorption by 20 folds. However, we will definitely update this section based on prospective research.

But since you have access to an easy recipe of Golden Paste that synergizes the effect of oil and pepper as bioenhancers, why not make the best use of it!?

40 thoughts on “Black Pepper Or Oil: Which Is Better for Turmeric’s Absorption?”