The endocrine system is a network of organs and the hormones they secrete which regulate body processes such as growth, metabolism, sexual function, sleep, etc.

The thyroid gland is one of the largest organs belonging to this system and plays an essential role. It is located in front of the throat above the collarbone with two lobes each present on either side of the windpipe.

The hormones secreted by thyroid regulate body metabolism and the activity of other hormones.

The principal hormones secreted by it are triiodothyronine, thyroxine, and calcitonin.

The first two hormones control growth and the rate at which the body burns calories while calcitonin regulates calcium levels.

The thyroid gland is controlled by the pituitary, which is considered the ‘master gland’ of the endocrine system. 1 in 20 people suffers from a thyroid dysfunction at some stage in life.

When this line of treatment fails, part or whole gland can be removed surgically.

Thyroid cancer and nodules are treated by surgical removal or radioactive iodine. Alternative medicine and naturopathy also offer remedies to these disorders.

7 Benefits of Turmeric In Thyroid disorders

Curcumin, as well as curcumin free turmeric, have natural anti-inflammatory properties. This can benefit in conditions like thyroiditis, goitre and thyroid cancer.

Curcumin acts on pro-inflammatory enzymes like COX and LOX in order to control inflammation from spreading. Unlike regular NSAIDs which act only COX enzyme, curcumin acts on both the enzymes without causing any side effects like gastric and liver toxicity.

Curcumin also regulates and inhibits the activity of key players in inflammation like TNF-alpha and Nuclear factor-kappa B.

By acting on these proteins as well as other biochemical targets and inflammatory pathways, curcumin relieves inflammation as effectively as conventional therapy.

What does this mean?
Turmeric and curcumin help relieve inflammation naturally in various thyroid disorders.

2. It helps as an antioxidant

Curcumin and other curcuminoids in turmeric are strong antioxidants with antioxidant activity comparable to vitamin C and E.

A study published in Indian Journal of Experimental Biology,2002 reveals that turmeric extract is as effective an antioxidant like vitamin E and C in hypothyroidism.

In an animal study, Samanta et.al have demonstrated that turmeric and curcumin can counteract oxidative stress (imbalance between prooxidant and antioxidant agents) caused by elevated triiodothyronine levels.

What does this mean?
As antioxidants, curcumin benefit thyroid health and balance thyroid hormone levels.

3. It benefits in hyperthyroidism

Hyperthyroidism is a condition caused by elevated thyroid hormone levels.

Elevated thyroid hormone levels can cause an imbalance between prooxidant and antioxidant levels in the body.

Hyperthyroidism affects the levels of liver enzyme and in turn disrupts liver function. Curcumin and vitamin E combination is found to alleviate such damage and restore liver function.

Similarly, turmeric and curcumin are found to protect kidney function due to damage caused by hyperthyroidism.

What does this mean?
Curcumin and turmeric are proven to improve antioxidant defences and protect organs from damage caused by hyperthyroidism. 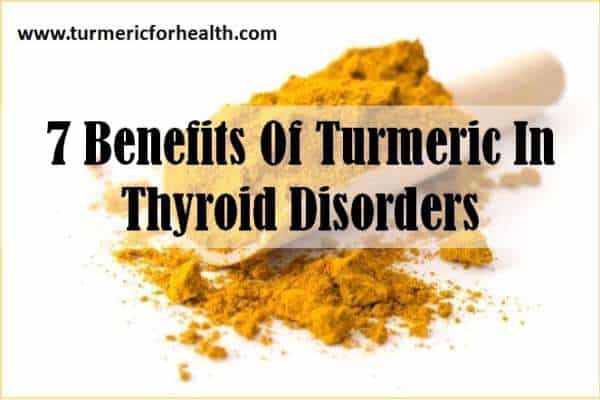 Hypothyroidism is when the thyroid gland does not produce enough thyroid hormone.

In an animal model of hypothyroidism, turmeric extract treatment is found to reduce atrophy (reduction in size) of thyroid glands and prevents the reduction of thyroid hormone levels. It is also found to alleviate high levels of cholesterol caused by hypothyroidism.

One study highlights that curcumin may have an age-related effect on the thyroid gland.

This study found that curcumin increases levels of thyroid hormones at a young age and reduces hormone levels in aged.

Further studies are required to assess this finding.

What does this mean?
Turmeric helps stimulate thyroid hormone production in hypothyroidism.

5. Including turmeric in diet reduces risk of goitre

A study published in the Indian Journal of Endocrinology and Metabolism investigated the role of dietary turmeric in the development of goitre.

In this survey, 2335 individuals were interviewed for disease history and screened for goitre.

The population had an endemic goitre and high prevalence of hyperthyroidism was observed.

Interestingly goitre was less common in those individuals who consumed milk, ghee, spices, chillies and turmeric.

The researchers emphasized that turmeric use was associated with reduced goitre development and recommended inclusion of turmeric in the diet in case of goitre.

What does this mean?
Dietary intake of turmeric reduces risk of developing goitre.

6. It has immunomodulatory action

Certain thyroid disorders are an autoimmune condition like Graves disease and Hashimoto’s disease.

These are characterized by abnormal levels of thyroid hormones and can increase the risk of developing a goitre.

In autoimmune conditions, the antibodies produced to fight infection, start attacking body tissues instead paving way for inflammation and damage to various organs.

It regulates the activity of immune cells as well as cytokines (chemicals secreted by cells) that play an important role in autoimmune reactions thereby preventing them.

What does this mean?
Curcumin benefits in autoimmune conditions that affect the thyroid gland.

7. Turmeric protects from and benefits in thyroid cancer

Research suggests that curcumin may be an effective agent in inhibiting the growth of tumors and thereby aid in the treatment of thyroid cancer.

Curcumin potentiates the anti-tumor and anti-cancer effect of sorafenib and docetaxel (anti-cancer drug) in treatment of thyroid cancer.

Curcumin is proven to sensitize thyroid cancer cells to the action of radioactive iodine which is used in the treatment of thyroid disorders.

Curcumin manipulates a number of biochemical pathways to inhibit metastasis of thyroid cancer.

What does this mean?
Curcumin can serve as anti-cancer agent in thyroid cancer and also prevents metastasis. It also sensitizes cancer therapy.

Dosage of Turmeric For Thyroid Disorders

Dietary turmeric can benefit in reducing the risk of thyroid disorders as well as benefit in treatment. A good way of taking turmeric is Golden Paste.

It includes oil and black pepper to enhance the absorption of turmeric and curcumin.

You can make the Golden Paste from fresh roots.

Start with ¼-1/2 tsp a day for a week and if no side effects are observed increase gradually. The recommended dose is 1-2 tsp 2-3 times a day (precisely 1 tsp 3 times a day). The ideal dose differs with every person; depends on what suits you and benefits you.

Avoid taking Golden Paste on an empty stomach and close to the time of taking medicines (Read Does turmeric cause acid reflux? Does black pepper in golden paste interact with medicines?)

If taking turmeric supplements consult a doctor prior.

Dietary turmeric is very safe but a few precautions need to be considered when it comes to turmeric supplements:

Curcumin found in turmeric is known to interfere with drug metabolism.

Hence it is advised not to take curcumin supplements concomitantly with any other medicine. Consult a health practitioner before taking turmeric supplements.

Read: Can you take turmeric with Synthroid

Turmeric is rich in powerful natural antioxidants, which makes it therapeutically effective in thyroid disorders.

It can balance thyroid hormones in hyperthyroidism as well as hypothyroidism. It can help reduce inflammation and reduce the risk of goitre.

Turmeric can prevent and benefit from thyroid cancer.

We highly recommend including turmeric in the diet to manage as well as prevent thyroid disorders.

38 thoughts on “7 Benefits of Turmeric In Thyroid Disorders”