Mostly any one who has read a decent amount of data on curcumin or even heard about it knows that it has tons of health benefits. (Read 21 Health Benefits of Curcumin)

Curcumin is one of the active ingredients of turmeric and lot of research has been done on this molecule over the past decade or more. (Read What is Curcumin? What makes it so special?)

Turmeric powder or even fresh roots is included on a regular basis in the Asian diet. For example in India, in a single meal you would find at least 3 dishes that contain turmeric powder or as it is known here ‘haldi’.

Since it is such an important dietary constituent it goes without saying that turmeric in diet is safe.

However we cannot rule out chances of allergy or risk of heavy metal or other contamination in turmeric powder.

They are extracted to achieve standardized 95% curcumin and formulated with bioenhancers to increase the absorption in the body. (Read Popular Curcumin Formulations, How to increase bioavailability of curcumin?)

This brings forth the question as to how safe is such large concentrations of curcumin and for how long can they be safely consumed.

Various clinical trials have investigated the safety and efficacy of curcumin supplements in various health conditions and the results have been positive for a significant proportion with no or minimal toxicity.

A dose escalation study of curcumin was published in BMC Complementary and Alternative Medicine, 2006 . This study was conducted to identify a single high dose of curcumin C3 complex that was well tolerated by healthy individuals.

However, at a dose of 10000 and 12000mg curcumin was detected in the plasma of two individuals.

Apart from the bulky volume of curcumin at high doses, curcumin was found to be well tolerated in single oral doses. Scientists reported the following adverse events in the study:

Each of these were said to be of minimal grade and not dose-related.

Another study designed on similar grounds, examined the efficacy of 10g and 12g curcumin dosing in 12 healthy individuals. The adverse events noted included:

Only 4 individuals experienced such side effects and scientists concluded that these were unlikely to be related to the treatment. The gastric side effect could have been a result of lack of curcumin absorption in the intestine.

However oral curcumin was detected in the blood plasma in the form of metabolites or curcumin conjugates.

Klickovic et.al conducted a study to understand the absorption of curcumin and to assess its effect on an enzyme heme oxygenase-1. Heme oxygenase-1 is found to mediate anti-inflammatory and antioxidant effect.

10 individuals received 12g curcumin. It was found that oral curcumin had low bioavailability and did not increase heme oxygenase-1 production. However, no adverse events were noted.

Moving to the formulated versions of curcumin, a study reports that high dose Longvida or solid lipid curcumin (2-4g) does not cause any significant side effect in healthy as well as cancer patients.

A 500mg dose of micronized curcumin (micron sized particles of curcumin) and micellar curcumin (curcumin trapped in micelles or pockets of liquid colloid or detergent) is found to be safe in healthy individuals with better bioavailability than unformulated curcumin.

Theracurmin, a nanoparticle formulation of curcumin, is found to be relatively safe at doses of 150 and 210mg. The only adverse event reported at a dose of 150mg was grade 1 diarrhea in 1 individual.

Many studies have evaluated the safety of curcumin supplements in cancer treatment as well. A study investigated the effect of curcumin (dose 0.45 g -3.6g) in advanced colorectal cancer and no dose limiting toxicity was observed.

Irving et. al conducted a similar study where they investigated the chemopreventive potential of curcumin and their study reported mild gastrointestinal adverse events at a dose of 2.35g of Curcumin C3 complex.

The phase I study by Kanai et.al which involved patients receiving gemcitabine chemotherapy found that higher doses of Theracurmin does not increase the incidence of adverse events in cancer patients and was found to be safer for a period more than 9 months.

Possible Side effects of Curcumin Supplements

Here is a list of possible side effects of curcumin supplements that one should be aware of:

As we have gone through the various studies in humans that have assessed the effect of curcumin, the most common adverse event noted was gastric discomfort such as diarrhea, yellow stools.

This can occur as a result of the sudden consumption of high dose curcumin. Inadequate digestion and absorption of curcumin can cause gastric discomfort.

In individuals who are susceptible to developing acid reflux, it is advised to avoid taking turmeric or curcumin on an empty stomach. (Read Does Turmeric Cause Acid Reflux?)

One can take a couple of precautionary measures to avoid gastric discomfort when taking curcumin:

Before diagnosing yourself with an allergy to turmeric or curcumin, rule out the possibility of contaminants or heavy metal toxicity in turmeric powder or curcumin powder/supplements that may elicit an allergic reaction.

Curcumin in turmeric is proven to have an anti-coagulant effect in animal models. This is beneficial in thrombosis like conditions as it can help prevent clot formation.

However it is advised if one is already taking blood thinners like warfarin or clopidogrel , one should avoid curcumin supplements as it may have an additive effect and increase bleeding risk. However, no evidence confirms this.

Also if prone to bleeding risk, then one should avoid curcumin supplements. Again there is no study that confirms this or notes increased risk of bleeding in humans after curcumin consumption.

Dietary turmeric is not likely to pose this issue; but in this case it is best to consult a health practitioner prior. 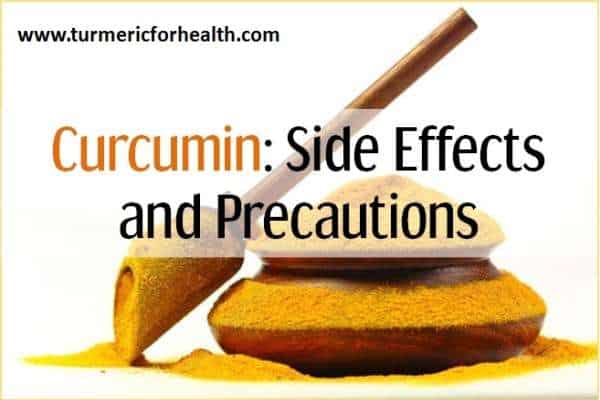 Here are a couple of precautions to be noted about curcumin supplements.

1. Avoid if suffering from bleeding/clotting disorder

As mentioned previously curcumin has anti-platelet or anticoagulant property.  (Read Is Turmeric A Blood Thinner?) Curcumin supplements are highly concentrated versions of curcumin and hence may increase bleeding risk.

Though not proven in human studies; it is advisable to avoid curcumin supplements in a bleeding or clotting disorder and if taking blood thinners.

2. Discontinue curcumin prior to surgery

Due to curcumin’s anti-platelet activity, it is advised to discontinue curcumin supplements two weeks prior to any surgical procedure to minimize and avoid bleeding risks.

3. Avoid if suffering from gallstones or gallbladder obstruction

Now this action of curcumin is beneficial in preventing gallstone formation. However if already suffering from gallstones or bile duct obstruction, a contraction of this sort can cause severe pain.

Therefore it is advised to avoid curcumin supplements in gallstone or gallbladder obstruction.

4. Use turmeric with caution in case of gout or kidney stones

Now, this precaution does not stand for curcumin supplements, but its mention is noteworthy. Turmeric as a spice is high in oxalates and hence it should be avoided in case of gout or if one is susceptible to developing kidney stones.

However, curcumin supplements are extracted and purified to a level that oxalates are minimal and non toxic.

Therefore for therapeutic purposes in case of kidney stones and gout, it is advisable to take curcumin supplements over turmeric as a spice.

For more details on this read: Does Turmeric Cause Kidney Stones? Is it safe to take Turmeric In Gout?

5. Avoid curcumin in pregnancy and lactation

No study till date establishes the safety or even side effects of curcumin supplements in pregnancy and lactation.

Traditionally turmeric is said to be a uterine stimulant. However Asian women continue consuming turmeric in diet even during pregnancy and lactation. Dietary turmeric would constitute to less than or around ½ tsp of turmeric powder in a day.

It is safe to consume dietary turmeric in pregnancy and lactation. Avoid curcumin supplements in such a case.

6. Curcumin supplements should not be taken together with other medications

However, studies have shown that cucumin taken in combination with certain medications does not cause any side effects; but it increases the concentration of the medication in the blood.

This ideally increases the therapeutic efficacy of the medication but on long term such high levels may cause side effects. Also, it is important to note that curcumin does not affect the activity of the medication or result in production of a new compound.

Therefore if taking a curcumin-piperine combination supplement, it is advisable to not to take it at the same time as any medication. (Read Black Pepper in GP: Does It Cause Drug Interaction?)

But some researchers do not agree with this and state that short term use of curcumin piperine combination is unlikely to result in any herb drug interaction.

How to reduce the side effects associated with curcumin supplements?

Minor adverse events as a result of taking turmeric can be overcome with the following steps. In case of major events please discontinue use of turmeric or consult a health practitioner.

Dietary turmeric is found to be safe and similar results have been depicted regarding curcumin supplements by clinical studies. The commonly noticed side effect of curcumin supplement is gastrointestinal discomfort such as diarrhea or yellowing of stools.

This can be mitigated by starting with low dose curcumin and increasing gradually.

Curcumin supplements are advisable to be avoided in pregnancy and lactation. Due to its anti-platelet property, it is recommended to avoid curcumin in bleeding disorders.

Overall curcumin is a safe compound and has minimal or no toxicity. It serves as a safe alternative to many mainstream medications. Consult a health practitioner before taking curcumin supplements for appropriate dosage and formulation choice.

16 thoughts on “Curcumin: Side Effects And Precautions [MUST READ]”