Thrombosis is a condition in which blood flow through the circulatory system is obstructed due to the development of a blood clot.

Blood clotting is a part of the body’s defenses to prevent excessive blood loss in case of injury. A blood clot is a clump of hardened blood.

Platelets (a type of blood cell) and proteins in the blood act in unison to form a blood clot.

Normally the body dissolves the blood clot after the site of injury has healed.

In some cases, blood clots develop inside the body without the occurrence of any injury and do not dissolve leading to the condition, thrombosis.

A clot that develops in the arteries or veins is known as a thrombus. A clot that is dislodged from the body and travels from one organ to another is known as an embolus.

A blood clot can lead to partial or complete oxygen deprivation, swelling, fluid buildup and death of tissue.

Sometimes a blood clot travels from the vein through the heart to the lungs where it gets lodged preventing adequate blood flow. This condition is called pulmonary (lung) embolism.

Thrombosis is classified based upon the organ or blood vessel affected:

The risk factors associated with incidence of thrombosis are:

Symptoms of blood clots are dependent on the organ affected; however the most commonly seen symptoms are:

The treatment options available are:

Thrombosis is preventable and one of the best ways is to modify risk factors.

In case of genetic causes, it would be advisable to explore natural remedies to combat thrombosis. One such herbal remedy is use of turmeric, a curry spice staple in Indian diet, against formation of blood clot.

The bioactive properties of turmeric are attributed to various components isolated from its rhizome. The important components are curcuminoids and the volatile oil.

Volatile oil consists of aromatic (containing benzene ring of hydrocarbons) compounds out of which tumerone and ar-tumerone are considered clinically important.

Curcumin accounts for 5-6.6% of turmeric while volatile oils make up less than 3.5% of the composition.

Sugars, proteins and resins are also isolated from the rhizome. 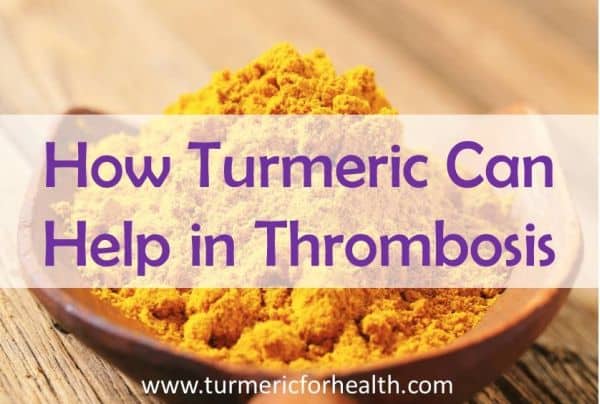 Role of Turmeric as an Anticoagulant

Turmeric’s activity as an anti-thrombotic or anti-coagulant agent involves modulation of various factors that aid in the process of clot formation.

Following studies investigate the different ways by which turmeric proves to be therapeutic in thrombosis and related complications.

Their effect was tested against different agents that aid in platelet aggregation like ADP, collagen, arachidonic acid etc.

Blood clotting involves the combined efforts of platelets and protein named fibrin. Fibrinogen is converted to fibrin by a protein named thrombin.

Thrombin exists in an inactive state in blood plasma which is known as prothrombin and its activation is mediated by an agent named prothrombin activating factor complex.

Factor Xa is an enzyme that strongly mediates the development of this complex.

In this study the anticoagulant properties of curcumin and bisdemethoxycurcumin (BDMC) were determined by monitoring parameters like activated partial thromboplastin time (aPTT), prothrombin time (PT) and thrombin and FXa generation activities.

They also inhibited the production of thrombin and FXa thereby disrupting the blood clotting process.

Curcumin was found to be more potent than BDMC.

Results suggested that daily consumption of turmeric might aid to maintain an anticoagulant status.

When the inner lining of a blood vessel is damaged due to various conditions like surgery, trauma or infection, collagen (one of the basic proteins that make up the connective tissue) is exposed.

Circulating platelets bind to this exposed collagen and are activated to initiate formation of blood clot.

A study was conducted to evaluate curcumin’s anti-platelet action by examining its effects against such granules that serve as platelet agonists.

Curcumin also inhibited the production of thromboxane A2 by platelets.

Curcumin also regulated the presence of calcium ions which are known to aid in platelet aggregation.

Myocardial ischemia is a condition in which blood flow to heart is restricted for awhile due to congestion in blood vessels.

Reperfusion injury is the damage that occurs when blood flow returns to normal status.

Absence of oxygen and nutrients causes inflammation and oxidative damage.

Curcumin oil was proven to be effective against experimental thromboembolism (a detached blood clot that is transported by blood flow to another a blood vessel which it then obstructs and plugs) and also prolonged the time required for clot formation in experimental arterial thrombosis in rats.

The main components of the oil that brought about this effect were turmerone, α,β-turmerone and curlone.

It was concluded that turmeric oil is a safe agent which can be used to treat vascular thrombosis.

As a part of the study regarding curcumin and diesel toxicity, curcumin’s effect against diesel exhaust particle induced thrombosis was investigated.

Experimental thrombogenesis in cerebral arterioles (tiny blood vessels originating from arteries leading to capillaries in the brain) was initiated by repeated exposure to diesel exhaust particles.

Curcumin at a dose 45mg/kg was found to partially but significantly inhibit arteriolar thrombosis by preventing platelet activation and aggregation.

Turmeric is a very safe spice.

One can safely take 1 tsp of turmeric powder a day but be cautious while taking curcumin supplements.

Turmeric is poorly absorbed in the body and thus is best taken along with fats and black pepper.

Read our detailed article on methods to increase bioavailibility of turmeric>

One can buy and use any good turmeric powder available in the market. If you are confused, here are some recommended brands you can look at>

Turmeric supplements are formulated as direct sources of curcumin or they contain substances that enhance their absorption in the body.

If not taken as per recommended dose, these supplements can have adverse reactions.

Though turmeric’s blood-thinning activity is exploited as a cure for thrombosis, it is due to this reason that one is advised to discontinue turmeric supplements before surgeries.

Turmeric is known to decrease blood glucose levels. Hence it should be avoided with diabetic medications which treat hyperglycemia, as together they can lower glucose levels drastically.

They should also be avoided in case of pregnancy and lactation.

Turmeric is known to interfere with the activity of drugs that reduce stomach acid.

In the case of gallstones or obstruction in bile passage, turmeric should be taken with caution.

1 out of 1,000 individuals is known to be affected by thrombosis annually. The rates are higher in men than women.

Death, recurrence and bleeding episodes due to anticoagulation are the major outcomes of thrombosis.

Prophylaxis with the use of blood thinners like heparin does not decrease mortality rate and increases the risk of bleeding.

Blood-thinning activity of turmeric is generally considered as a side effect while treating other disorders.

However, it is proven that dietary intake of turmeric can help to reduce the incidence of thrombosis without any adverse effects.

The anticoagulant properties of turmeric can also evade complications associated with thrombosis such as pulmonary embolism.

15 thoughts on “Can Turmeric Help in Thrombosis?”