One of the signs that are proof of a dog’s good health is his coat.

The shinier the coat the healthier the pet.

Skin diseases are a common health problem in dogs. Skin problems can occur as a result of a variety of factors like:

One of the most common canine skin diseases is atopic dermatitis, a hereditary disease that is triggered by exposure to allergens.

Symptoms in all skin diseases are almost similar; itching or licking, redness, development of boils or ulcers, bleeding, drainage of pus, etc.

What is the treatment available for skin diseases in dogs?

Topical ointments and shampoos can be prescribed by vets to ward off the microbes. A balanced diet or diet free from possible food allergens could be prescribed.

Steroids and anti-inflammatory medicines to control the itching could also be recommended.

How can turmeric help in treating canine skin diseases?

Turmeric is a spice and herb native to Asia. It is generally available as a golden yellow powder extracted from the rhizome. Curcumin is the principal bioactive component of turmeric. Turmeric oil also has pharmacological properties.

This article highlights various ways in which turmeric could help fight your pet’s skin disorder. However, there are no studies or trials conducted on this aspect which demonstrate direct use of turmeric to treat canine skin disorders.

Therefore we recommend consulting a vet before using turmeric for treating your pet’s disorder.

1. It acts as an anti-microbial agent 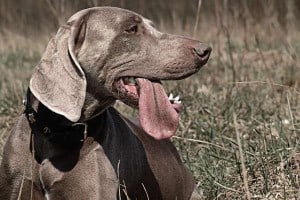 Dogs are susceptible to rash, itching, and lesions caused by microbial infections. Turmeric is a natural anti-microbial agent. Curcumin and other extracts from turmeric are found to act against bacteria, viruses, and fungi.

Oil obtained from the leaves of the turmeric plant is shown to have anti-microbial against 8 fungal and 5 bacterial strains.

Leishmaniasis is a disease that occurs in dogs due to infection by the parasite, Leishmania. It can manifest as a skin reaction. Curcumin and its derivatives show anti-leishmanial activity.

However, this effect is not limited to Leishmania species alone. Turmeric is potent enough to destroy a number of parasites.  Application of turmeric and neem paste is found to be therapeutic in scabies in humans.

Pododermatitis, a canine skin disease, can occur in a severe form wherein it is infected by a drug resistant strain of bacteria, S.aureus.   Curcumin reverses drug resistance in this strain and exerts anti-bacterial activity against this strain.

What does this mean?
As an anti-microbial agent, turmeric shows inhibitory activity against bacteria, fungi and viruses some of which are seen as an infection in canine skin diseases.

Lesions seen as a result of skin diseases are an external indicator of internal inflammation. Diseases such as psoriasis-like dermatitis are marked by inflammation and curcumin’s anti-inflammatory effect helps to treat it.

Turmeric exerts an anti-inflammatory effect by:

What does this mean?
Curcumin and curcumin free extracts of turmeric can help resolve skin related inflammation.

3. It is a potent antioxidant

Turmeric is a natural antioxidant and it demonstrates this activity by   :

Turmeric’s antioxidant nature is useful in wound healing and replacement of damaged skin.

Treatment with turmeric can make use of the herb’s antioxidant property to ameliorate oxidative stress and improve antioxidant status, thereby healing atopic dermatitis. 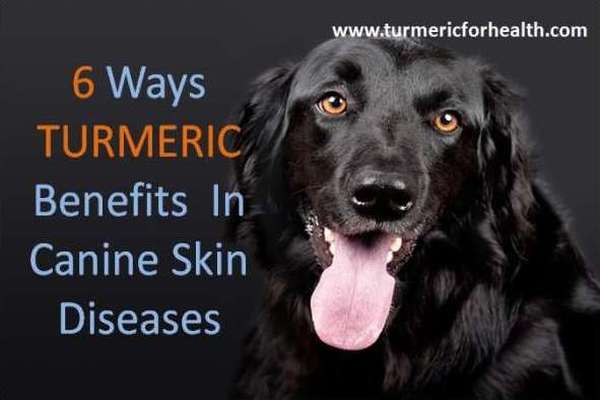 4. It acts as an anti-allergen agent

Mast cells are a type of immune cells produced in response to an allergy. They release a chemical called histamine which exacerbates the allergic reaction which is characterised by redness, boils and itching.

Curcumin is found to suppress the activation of mast cells and release of pro-inflammatory chemicals.

Curcuminoids, especially curcumin, extracted from a variant of turmeric is proven to suppress allergic reaction and reduce itching by inhibiting the activity of proteins that stimulate itching responses.

Research proves that development of atopic dermatitis in dogs occurs due to exposure of allergens such as food allergens, pollen etc.   An experimental model was developed to test curcumin’s efficacy against allergens.

Curcumin was found to reduce inflammation and the presence of cells that accelerate the allergic reaction. This indicates that curcumin has the potential to control responses on exposure to the allergen.

What does this mean?
Curcumin is effective in controlling allergic reactions and this could be useful in case of skin diseases where dogs are exposed to allergens like flea, ticks or food allergens or dust and pollen. It can also help in soothing itching and redness associated with most skin diseases.

5. It influences the immune system

Curcumin possesses immunomodulatory effects: it can increase the immune response in case of infection or suppress the response to control inflammation.

Certain skin diseases in dogs are autoimmune diseases- they occur when the body recognizes one of its own proteins as a foreign body and the immune system releases chemicals and cells to destroy it.

This is applicable to the disease of pododermatitis (and other autoimmune skin disorders like sebaceous adenitis )that is externally characterised by redness, swelling, itching and loss of fur but on the inside many immune cells and inflammatory agents are combating the body’s natural elements.

Interestingly such cases do not respond to regular anti-microbial or anti-parasitic agents. Immunosupressants and steroids are used to treat them. Turmeric also acts as an immunosuppressant.

What does this mean?
Turmeric and its bioactive component curcumin can serve to be therapeutic in autoimmune skin diseases.

6. It can help in repairing skin damage 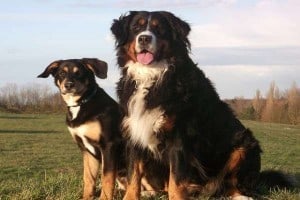 Curcumin is proven to be useful in terms of dermatological concerns. It can be used to treat skin infections, dyspigmentation, psoriasis, vitligo and melanoma.

It also facilitates detoxification and this aids in maintaining healthy skin.

Turmeric also has skin regenerating potential.  It accelerates wound healing and burns which indicates that it can repair skin damage.

A lab study  demonstrates that a combination of aloe vera, curcumin and vitamin C helps in the migration of fibroblasts and hastens skin repair.

Fibroblasts are cells that form a part of the connective tissue and their migration to affected skin site is vital for a quick repair.

What does this mean?
Turmeric is an excellent option when it comes to healing skin burns, wounds and scratches that your pet might be afflicted with.

Pet stories: Pet owners and their experience with turmeric

A pet owner writes about how they made use of turmeric and neem paste to heal their dog’s hot spots.   The skin disease was characterised by red boils, thinning of hair and excessive scratching.

For a couple of months, the dog was treated with antibiotics and topical creams. The hot spots healed for awhile but then returned as a bacterial infection.

Along with antibiotic, the owner started the pet with topical neem paste application.

The paste was made by blending neem leaves with turmeric powder and water in a blender to make a paste. This paste was applied on affected areas and within three weeks the infection and rash disappeared. Hats off to the old age Ayurvedic remedies!!

How to use turmeric for skin diseases?

You can apply turmeric topically to your pet’s wound or skin lesion. Mix 1/8 to ¼ teaspoon of turmeric powder with 1 teaspoon of oil and apply it to the affected area.

You can cover it with a gauze and leave it overnight or you can apply it repeatedly 3 times a day.

Even ingestion of turmeric can help in treating skin disorders. The following table guides you about the amount of turmeric your pet should get based on his weight

Take ½ cup of turmeric powder and 1 cup water in a pain and stir on low flame. Develop a thick paste. Adjust the water content based on the thickness of the paste. This can take about 7-10 minutes

Add 1 ½ teaspoon of freshly ground black pepper and 70 ml coconut or olive oil and mix well to make a good paste.
Based on the amount of turmeric your pet should receive, decide the amount of Golden Paste. Start with small doses and build the dose gradually if it suits your pet.

In fact, you don’t need to make a separate Golden Paste for your pet. You can just use the same one that you make for yourself, and based on the dose suggested for your pet’s body weight you could feed him that amount.

However to make the paste more palatable and less spicy add boiling water to the paste and mix to form gravy like consistency. Let this cool down and then add it to your dog’s food.

You can even add turmeric to your dog’s treats but this might not reach the therapeutic efficacy of The Golden Paste.
Read Turmeric Dosage For Dogs- The Definitive Guide for more details

Including turmeric in the diet should not affect your dog’s health adversely. However gastrointestinal trouble is possible if turmeric doesn’t suit your dog.

Some pet lovers feel that black pepper may irritate gastric lining while some find that their pets do just fine with it. In case you feel that it doesn’t suit your pet then try giving him turmeric with fats alone.

Turmeric in the diet shouldn’t cause any problem, but you can avoid turmeric prior to any surgical procedure that your pet is scheduled for. No such bleeding risk in pets has been noted due to turmeric, but you can always be careful about it.

Add lots of water when you include turmeric in your pet’s diet. Do not give turmeric powder obtained from pills or capsules. Consult a vet before starting your pet on turmeric.

If your pet is pregnant, turmeric might act as a mild uterine stimulant so it is advisable to avoid turmeric then.

However, there is no study which proves this.

Turmeric has been used as a part of traditional medicine to treat skin diseases in humans. This definitely suggests that the herb possesses properties which aid in wound healing and skin repair. It anti-microbial property can help ward off infections.

Turmeric can definitely turn out to be an alternative remedy for treating your pet’s itch or wounds and restoring its healthy coat.