Melanoma is cancer that affects melanocytes- the cells that produce the pigment or color of the skin.

It generally affects the skin but can also affect the eyes, intestine, and mouth.

By appearance, they present as lesions or moles on the skin with irregular edges which can itch, bleed and even ulcerate.

Melanoma is more common in men than women and is considered one of the most dangerous types of cancer.

Melanocytes lie in the lower part of the epidermis (upper layer of the skin) and create skin pigment melanin. On exposure to sunlight, they produce more melanin causing the skin to darken.

Harmful UV rays in the sun can cause DNA damage which in turn causes mutations in melanocytes. These then grow in an uncontrolled fashion and reach deeper parts of the skin forming a tumor. Melanoma can even metastasize and spread to other parts of the body.

Based on the size, severity, and spread of cancer, melanoma is classified into different stages- Stage I to IV.

Risk factors and causes of melanoma include:

Surgery is the first line of treatment for melanoma. Other treatment options include chemotherapy, radiotherapy, biologic therapy, targeted therapy, etc.

How does turmeric help in melanoma?

Quite a bit of research has been conducted on how turmeric manipulates various biological targets to destroy melanoma cells and prevent its spread. Curcumin the bioactive ingredient of turmeric is identified as a phytochemical (chemical of plant origin) of therapeutic potential in melanoma treatment.

Curcumin’s anti-cancer activity has been studied in relation to melanoma cells and these have resulted in positive outcomes.

The various ways by which curcumin targets melanoma cells are:

What does this mean?
Curcumin regulates multiple biochemical pathways and targets in order to destroy melanoma cells.

2. It acts an anti-tumor and anti-proliferative agent 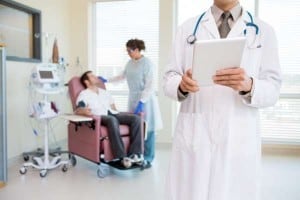 Curcumin prevents melanoma cells from growing in size and forming a tumor.

It works as a cytotoxic agent (a substance that creates toxicity in cells and destroys them) to cancer cells.

Curcumin derivatives work at a molecular level and arrest the cell cycle in order to inhibit tumor formation in melanoma cells.

Abusnina et al curcumin in food can prevent melanoma as it is a natural PDE-1 inhibitor (PDE-1 is an enzyme that is involved in cell proliferation) and antiproliferative agent.

What does this mean?
Curcumin, an anti-proliferative and anti-tumor agent, prevents melanoma tumors from growing in size.

3. It prevents melanoma from metastasizing

Curcumin suppresses the activation of AKT/mTOR pathway in order to prevent the melanoma cells from invading other tissues in the body.  This pathway is involved in regulation of cell cycle and controls the proliferation of cancerous cells.

Matrix metalloproteinase is an enzyme that degrades supportive tissue surrounding the cell.  Apart from that this enzyme plays a very important role in metastasis. Curcumin mediates anti-metastatic activity by reducing the activity of this enzyme in melanoma cells.

Lymph is a colorless fluid that carries immune cells to various parts of the body. Cancer cells invade lymph node and travel via lymph to other tissues and metastasize.

In an experimental study, curcumin is proven to prevent melanoma cells from invading lymph node and thereby inhibiting metastasis.

Melanoma can travel via the lymph to the brain and cause a brain tumor.

What does this mean?
Curcumin inhibits metastasis of melanoma tumors to organs like brain and lungs as well as other parts of the body.

4. It is therapeutic in melanoma of other organs

Melanoma mainly affects the skin but can also affect other areas such as eyes, mouth, and intestine.

Choroid is the part of the eye that provides oxygen to it. Chen et al examined the effect of curcumin oral administration in choroidal melanoma.

The animal study showed that curcumin reduced the production of biological molecules that aid in metastasis, reduced tumor volume and reduced the formation of new blood vessels thereby cutting blood supply to the tumor.

Uvea is another layer of the eye that can be affected by melanoma. Curcumin destroys uveal melanoma cells by targeting mitochondria or powerhouse of the cell and raising the level of enzymes that cause cell death.

What does this mean?
Research shows that curcumin destroys melanoma tumors originating in the eye tissue. 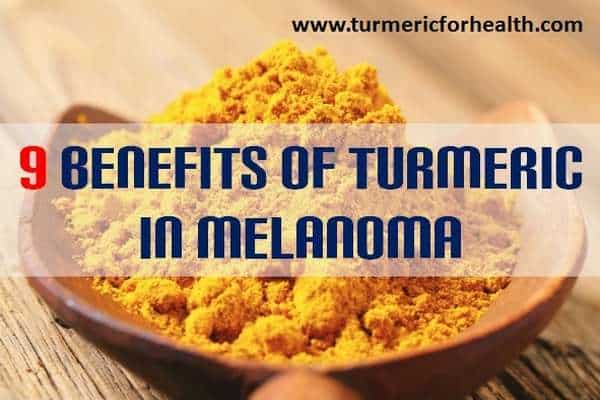 5. It acts in combination with chemotherapeutic drugs

P53 is tumor suppressor protein and malignant melanoma cells have mutated versions of p53 which confers drug resistance to these cells.

Bush et al have reported that curcumin causes cell death in melanoma cells by activating different pathways and proteins independent of p53 and this could help in overcoming chemoresistance in melanoma.

Chatterjee et al reported that curcumin sensitizes drug-resistant melanoma cells to tamoxifen.  Tamoxifen is a chemotherapeutic agent that is used in breast cancer treatment and destroys cancer cells by destroying mitochondria or powerhouse of cells.

Low doses of curcumin in combination with tamoxifen destroy melanoma cells and this effect sensitizes the cells in a way that they self destruct themselves even after withdrawal of drugs.

Curcumin derivative in combination with dacarbazine (anti-cancer drug) brings about improvement in melanoma treatment and reduction in side effects.

What does this mean?
Curcumin increases sensitivity of melanoma cells to chemotherapeutic drugs like tamoxifen, doxorubicin and dacarbazine.

Another regimen of treating cancer is by administering proteins that stimulate the body’s natural defenses and enable it to fight cancer.

Curcumin is a natural immunomodulator- it regulates immune responses.

At low doses, it can even stimulate immune responses.

Research suggests that curcumin can restore immune function in cancer.  It can prevent the suppression of T cells (type of immune cells) and lead to tumor regression.

A study by Chinese researchers also recommends the use of curcumin in combination with vaccine therapy for melanoma.  Bill et al report that curcumin treatment can increase responsiveness to immunotherapy in melanoma.

What does this mean?
Immunotherapy works on stimulating natural immune responses to fight cancer. Curcumin is a natural immune stimulator especially in case of cancer and research proves that it works well in combination with cancer directed immunotherapy.

7. It protects skin from UV rays

Exposure to UV rays from the sun is held as one of the risk factors for developing melanoma. UV rays are harmful since they cause DNA damage which in turn can lead to skin cancer.

Curcumin has photoprotective property and is thought of as a natural sunscreen agent.

Curcumin reverses damage to skin and protects from photoageing caused by UVrays.

What does this mean?
Exposure to UV rays from the sun is a risk factor for developing melanoma. Topical curcumin serves as a photoprotective agent and protects from UV induced skin cancer and tumor.

8. It has skin regenerative potentials

Curcumin’s role in skin diseases has been documented. Research suggests that curcumin has skin regenerative potential.

Curcumin lowers inflammation by inhibiting the activity of nuclear factor-kappaB, a protein that controls the inflammatory process.

As an antioxidant, curcumin scavenges free radicals or chemical species that cause tissue damage and protects against oxidative stress (imbalance between prooxidant and antioxidant agents in the body).

Curcumin’s wound healing  and chemopreventive potential can be of use in melanoma; it can help in faster healing after surgical excision of melanoma lesion.

What does this mean?
Curcumin’s therapeutic efficacy in skin diseases and wound healing property can help in healing of melanoma lesions after excision.

9. It protects from harmful effects of conventional cancer therapy 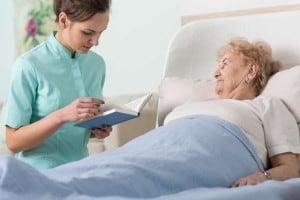 Chemotherapy and radiotherapy have their demerits which limit their therapeutic efficacy.

The first side effect is that these treatments are toxic to normal cells as well as cancerous cells.

Apart from that, they have non-specific side effects such as nausea, vomiting, sloughing off of skin, unintentional weight loss.

Curcumin is a proven radioprotector as well as chemoprotector- it protects normal cells from toxic effects of cancer cells.  Also as an anti-cancer agent, it targets only cancer cells and is not toxic to normal cells.

Curcumin’s use in treatment of cancer-induced cachexia or weight loss is implied.

Panahi et al have shown that oral administration of curcuminoids improves quality of life and reduces the side effects of chemotherapy in individuals with solid tumors.

What does this mean?
Curcumin protects normal cells and organs from harmful effect of conventional cancer treatment.

Turmeric in a diet is safe and can serve as a preventive measure for cancer. A therapeutic way of including turmeric in the diet is The Golden Paste. You can include this preparation in smoothies, curries, soups, rice preparation or simply take it with meals.

For a more detailed dosage please refer to Turmeric/Curcumin Dosage For Cancer- A Scientific Plan.

If you need help identifying a good brand of turmeric supplements or powder then we have got a list of certified suppliers here.

There are no side effects of including turmeric in the diet. Mild gastric symptoms could occur initially, but they disappear with time.

Quite a bit of scientific evidence points towards turmeric’s therapeutic potential in melanoma. Various formulations and derivatives of curcumin are being designed with the aim of treating melanoma.

Turmeric’s potential to provide photoprotection, synergy with chemotherapeutic agents and protection from side effects of conventional anti-cancer treatment makes it a potent adjunct therapy in melanoma.

4 thoughts on “Can Turmeric Help In Melanoma? What Science Says”