Dementia is described as a group of symptoms affecting memory, thinking abilities and social skills. Dementia is a serious decline in mental ability. It usually occurs in people who are above 65 .

Dementia is a disorder which worsens with time; it is not a part of normal aging.

The disorder starts and develops gradually; there is no definite point where it begins.

In dementia, acetylcholine level in the brain is low. Acetylcholine is a neurotransmitter which helps with the learning, concentration, memory, and aid in controlling the functioning of many organs of the body.

Disorders that cause dementia are:

Conditions that cause reversible dementia are:

Types of dementia include:

Dementia with Lewy bodies: Microscopic deposits of a protein formed in the brain are known as Lewy bodies. Symptoms include hallucinations, trouble in concentrating and trouble to make, unusual sleeping habits and problems with movement.

Mixed dementia: It is a type of dementia where two or three types occur simultaneously. For example, a person may be diagnosed with Alzheimer’s disease and vascular dementia at the same time.

Huntington’s disease: It is a hereditary brain disorder. People with this disease have a problem with memory, judging, planning, organizing, thinking, and reasoning.

Symptoms of Dementia include:

How Turmeric Benefits In Dementia

Turmeric and curcumin have neuroprotective properties that help prevent or halt dementia: 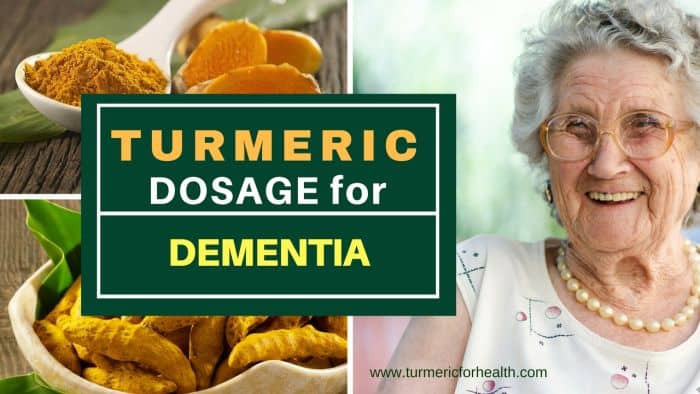 Disclaimer – There is no particular prescribed dose of turmeric defined for dementia. Based on the studies and reader’s reports we have summarized various ways of taking turmeric which could benefit in this disorder.

The dosage depends on the formulation of the turmeric supplement and severity of the health condition. Here is the recommended dose:

Turmeric roots are a great addition to diet and if consumed regularly can benefit brain health.

Recommended intake: 1-3g or ½ inch long piece of root sliced or chopped. You can also juice it and take it with a pinch of black pepper. This can be a part of your fresh juices or taken individually. You can also make Golden Paste from fresh roots.

Start with a small dose and increase gradually. Avoid taking it on an empty stomach. You can also prepare DIY Turmeric Capsules.

It is highly recommended to take this paste after/with meals and to avoid taking it close to other medications. (Read Does Turmeric cause acid reflux? Black pepper in GP: Does it cause drug interaction?) Here is the recipe.

You can also make Golden Paste from fresh roots.

Start with small doses such as 1/4-1/2 tsp and if you see no side effects then increase the dose by ¼ teaspoon every week. Continue till reaching a dose of 1-2 tsp 2-3 times a day (precisely 1 tsp 3 times a day).

Maximum dosage: 1 table spoon 2-3 times a day only advised if you are comfortable taking it and not experiencing gastric side effects.

The benefit of turmeric tincture in dementia is not ascertained by scientific literature. You may consult an herbalist about this.

Take 10-30 drops 2-3 times a day depending on the condition. It can be added to teas, juices or smoothies.

This is a good option for tea lovers and who want to skip the taste of turmeric paste. Here is the recipe for Turmeric Tea.

This is just perfect when it comes to combating pain naturally. You can find the recipe for Turmeric Milk here.

The recommended dosage for supplements is 300-400mg 2-3 times a day for a standardized 95% curcumin extract.

However the dose would differ based on the formulation, hence it is best to consult a doctor before taking turmeric supplements.

Avoid taking supplements on an empty stomach and close to the time of taking medicines. Consult a health practitioner before taking turmeric supplements.

Turmeric in diet is absolutely safe. Turmeric supplements should be taken with care. (Read Side effects of Turmeric)

If you are taking blood thinners, turmeric supplements should be avoided. Turmeric can be included in diet in small doses. If suffering from a bleeding disorder consult a doctor and herbalist or naturopath before taking turmeric.

Turmeric supplements should be avoided in case of gall bladder obstructions. (Should you take turmeric if you have gallstones?)

If harrowed by turmeric stains here is how you can take care of them.

Dementia is described as a group of symptoms affecting memory, thinking abilities and social skills.

Anti-inflammatory, antioxidant and neuroprotective properties of turmeric make it effective in preventing dementia.

Research still has to confirm the efficacy of turmeric and curcumin in reversing dementia.