Alcohol toxicity occurs when alcohol is ingested in large quantities and is very dangerous.

It is a medical emergency as alcohol toxicity; commonly called alcohol poisoning is fatal.

Due to the easy availability of alcohol and its addiction among people of the society alcohol intoxication is becoming increasingly widespread.

Ethanol is commonly seen to be ingested during suicide attempts.

Apart from binge drinking, ingestion of alcohol products like solvents, paints, anti-freeze agents, lotions and cleaning products even in small amounts may cause alcohol poisoning.

Alcohol is absorbed by the body very quickly and thus it is important to know the dose before consuming alcohol or its byproducts.

Numerous studies have reported that turmeric has the ability to detoxify the body of toxic chemicals and thereby aid in the treatment of alcohol toxicity / poisoning.

Turmeric has been known as a powerful medicinal herb for thousands of years.

It possesses miraculous properties helpful in curing a variety of ailments.

Curcuminoids are important constituents of turmeric out of which the most effective is curcumin.

It has strong therapeutic benefits.

Turmeric supplements have been found to be effective in replacing various drugs that have side effects.

Turmeric is safe and has no side effects. Its consumption can prove to be helpful in treating alcohol toxicity with positive results.

Turmeric has various pharmacological properties that can help reduce the adverse effects of alcohol poisoning.

1. It has anti-oxidant defenses

Curcumin is often known for its powerful anti-oxidant properties.

This can prevent oxidative stress induced in the liver due to alcohol poisoning.

A study published in Oxidative medicine and cellular longevity confirms the anti-oxidant properties of curcumin for this condition.

Another study conducted by Rukkumani et al. in 2004 demonstrated the anti-oxidative activity of curcumin in alcohol-induced oxidative stress.

Studies published in Journal of Biomedicine and Biotechnology in 2009 show that curcumin possesses anti-inflammatory properties that inhibit the expression of nuclear factor kappa beta and downregulates levels of cytokines that are responsible for inflammation and liver damage induced by alcohol poisoning.

According to an experimental study conducted by Ding et al. in 2017 curcumin suppresses the expression of specific micro RNA and cytokines that mediate inflammation.

What does this mean?
Curcumin is an important constituent of turmeric as it exhibits anti-inflammatory properties that inhibit the expression of microRNAs and cytokines that are responsible for mediating inflammation and causing damage to the liver and other tissues.

3. It aids in detoxification

Alcohol toxicity can have damaging effects on the body if not treated immediately. It is important to detoxify the body of alcohol as large quantities can damage the liver, pancreas and even the brain.

A study conducted by Naik et al. in Journal of Ethnopharmacology evaluated the detoxifying mechanism aided by curcumin.

The study reported that alcohol induces the release of large amounts of lactate dehydrogenase, high amounts of which leads to the toxicity/poisoning of the liver.

The experiment results showed that curcumin significantly reduces lactate dehydrogenase levels and lipid peroxidation induced by alcohol thereby preventing the cytotoxic effects induced by it in the liver cells.

An observational study by Akram et al. highlighted the hepatoprotective effects of curcumin as it reverses the production of aflatoxins by the liver preventing liver injury.

What does this mean?
Curcumin helps in detoxifying various toxic chemical that may be present in the body are are induced by alcohol poisoning. Ingestion of turmeric on a daily basis can prevent injury to the liver cells caused by toxicity.

4. It has neuroprotective activity

Neuroinflammation and brain damage is often induced in patients suffering from alcohol toxicity. Curcumin, found in turmeric has multiple properties that can protect the neuronal cells and prevent brain damage.

A study conducted by Cole et al. in 2008 reported that curcumin suppresses inflammation, oxidative stress and resulting damage to the liver caused by alcohol poisoning.

The study further emphasized that despite the difficulty of absorption by the body curcumin plays a highly effective role in protecting the tissues from oxidative damage in alcohol toxicity if it properly delivered.

A study published in Phytotherapy research in 1999 evaluated the neuroprotective role of curcumin in alcohol-induced brain damage in animal models.

The results of the study showed that curcumin reduced lipid peroxidation of brain lipids and increased levels of antioxidant, glutathione.

Curcumin was capable of preventing brain injury in the rat models by its powerful antioxidant and lipid-lowering properties.

What does this mean?
Various research studies are available that depict the neuroprotective role of curcumin in treating neurodegenerative diseases. Its power antioxidant properties and ability to inhibit lipid peroxidation prevent brain damage that is often caused in alcohol toxicity. 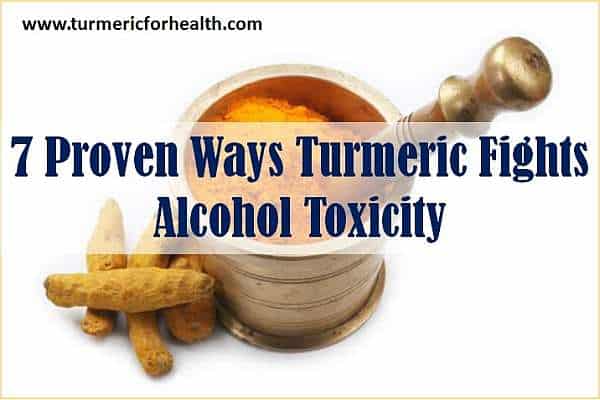 Alcohol toxicity is related to cognitive functioning. It has been found that this medical condition reduces cognition in normal individuals. However, according to researchers curcumin significantly improves cognition.

According to an experimental study published in Biogerontology in 2013 curcumin supplementation decreased malondialdehyde levels in the brain tissue thereby improving cognitive functions.

What does this mean?
Curcumin improves cognitive function by decreasing malondialdehyde levels and preventing oxidative stress in brain cells. This can prove to be essential in preventing cognitive impairment in patients suffering from alcohol poisoning.

Alcohol toxicity leads to irritation of the stomach inducing pain and vomiting and gastric inflammation and ulcers. Turmeric has been found to protect stomach health which can improve the condition of alcohol poisoning.

A study published by Werawatgonon et al. prevents gastric inflammation and gastric cancer by reducing levels of expression nuclear kappa beta factors that are responsible for it.

These parameters may worsen in alcohol-induced poisoning thus turmeric plays an important protective role in this condition.

What does this mean?
The anti-inflammatory and anti-oxidative properties of turmeric together help in protecting the stomach health  from alcohol toxicity.

Overconsumption of alcohol damages the liver and leads to three types of liver condition that is cirrhosis, hepatitis, and fatty liver.

Turmeric plays an important role in protecting the liver from damage.

A study published in Gastrointestinal and Liver physiology in 2003 demonstrated that when curcumin was administered to animal models it was found to inhibit levels of nuclear factor kappa beta that is responsible for the progression of liver diseases caused by alcohol.

The study concluded that curcumin is capable of preventing alcoholic liver disease by inhibiting the production of this nuclear factor dependent genes.

According to a study recently published in Agricultural and Biological Sciences curcumin decrease apoptosis of the hepatic cells and improves the expression of a group of proteins, PPAR-gamma (receptors that regulate fatty acid storage and glucose metabolism) thereby prevent liver injury induced by alcohol poisoning.

Studies report that curcumin protects alcoholic liver disease by its antioxidant properties that are capable of reducing lipid peroxidation and oxidative stress.

Curcumin in turmeric has hepatoprotective or liver protective property. This can protect liver health from alcohol toxicity.

Dietary turmeric is safe and there is no ideal dose for alcohol toxicity however its inclusion in diet on a regular basis can yield positive results.

Turmeric and curcumin both are poorly absorbed by the body. (Read How to improve turmeric’s bioavailability?)

Consumption of turmeric must start with small doses such as ¼-1/2 tsp a day for a week and if no gastric side effects are seen an increase the intake gradually by ¼-1/2 tsp every week. The recommended dose is 1-2 tsp 2-3 times a day (precisely 1 tsp 3 times a day).

Avoid taking turmeric on an empty stomach and if taking large doses avoid taking it the same time of taking medications. Maintain a 3-4 hour gap to avoid interaction of turmeric with the medicines. (Read Does Turmeric cause acid reflux? Black pepper in GP: Does it cause drug interaction?)

If one is suffering from a bleeding disorder, small doses of turmeric in the diet are safe but it is best to consult a doctor before taking turmeric or turmeric supplements in this case. (Read Is turmeric a blood thinner?)

A general precaution needed to be taken before incorporating turmeric in the diet is that turmeric may have drug interactions with stomach acid reducing medication, antidepressants, blood sugar reducing drugs, etc.

Curcumin, an active ingredient found in turmeric is known to interfere with drug metabolism. Hence it is advised not to take curcumin supplements concomitantly with any other medicine.

If you invite turmeric into your daily routine, you can begin to see miraculous differences within a very short time not only in this particular condition but also in terms of your overall well-being.

Turmeric has been vastly used in the past and is becoming increasingly popular in modern medicine that shows its power and effectiveness. Believe me, stocking up on this spice will not let you down.