Vitiligo is the disorder where there are patches of lacking pigment on the skin. The pigment in the skin which gives it its colour is called melanin.

The destruction of these melanocytes causes the loss of melanin from certain areas of the body giving the white patchy appearance.

Vitiligo affects up to 2% of the population. It is calculated that two to five million Americans suffer from this condition. In almost all cases vitiligo develops early, between the ages of ten to thirty.

The exact cause for vitiligo is unknown, but there are many theories put forth by doctors and researchers.

Theory 1: Blaming the family tree
There is strong evidence that people inherit the genes which make them vulnerable to de-pigmentation.

Theory 2: Autoimmune disease
The most extensively accepted view is that vitiligo is an auto immune disease. That is, immune system reacts against the body’s own organs and tissues.

Here the body produces certain proteins called cytokines which alter the melanocytes and cause them to die.

Theory 4: Physical/psychological stimulus
Incidents such as emotional stress or sunburns are said to have triggered vitiligo.

It also affects armpits, shins, nipples, anus and the genital area. The affected areas produce white hair due to the loss of melanocytes from the hair follicles.

People of all skin types are affected by this disease, but it may be more noticeable in darker skinned people. Vitiligo is treated in several ways. Treatment might improve the way the affected skin looks, but it does not cure the disease in totality.

Various treatments are as follows. The affected areas are very sensitive to sunburns, hence skin must always be protected with clothing and sunscreen. Sometimes white patches re-pigment when treated with corticosteroid (hormones secreted in the adrenal cortex) creams.

Some people opt for skin grafting surgeries. There is a process called bleaching, where the unaffected area of the body is rid of melanocytes, hence establishing an even colour. Bleaching is an irreversible process.

How Turmeric Benefits In Vitiligo

Research and trials conducted revolving around the use of turmeric in the field of curing vitiligo are limited. However turmeric benefits in skin disorders.

According to a study conducted by Faculty of Ayurveda, Institute of Medical Sciences, Banaras Hindu University, U.P., India, a mixture of a herb called Bakuchi, equal amount of turmeric and an arsenic compound called Hartala in melanocytes regeneration.

This points to the fact that turmeric is also capable of treating vitiligo in conjunction with other herbs. 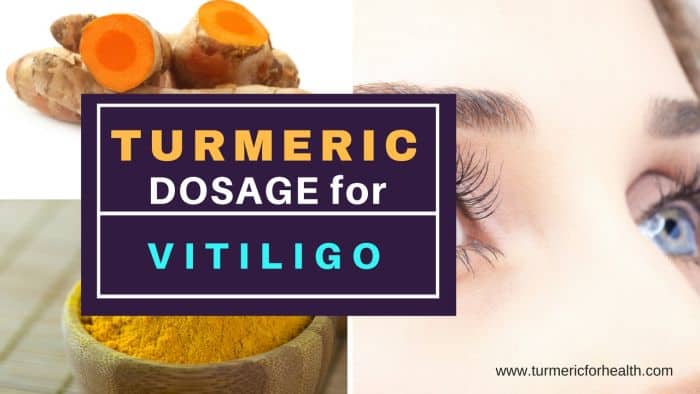 Disclaimer – There is no particular prescribed dose of turmeric defined for vitiligo. Based on the studies and reader’s reports we have summarized various ways of taking turmeric which could benefit in this disorder.

Variety of studies have confirmed the therapeutic efficacy of turmeric in skin disorders and this could be of help in vitilgo.

The dosage depends on the formulation of the turmeric supplement and severity of the health condition. Here is the recommended dose:

Turmeric roots are a great addition to diet but it is difficult to expect a therapeutic effect from the limited amounts of roots we consume.

Recommended intake: 1-3g or ½ inch long piece of root sliced or chopped. You can also juice it and take it with a pinch of black pepper. This can be a part of your fresh juices or taken individually. You can also make Golden Paste from fresh roots.

In terms of teaspoon that would be 1 teaspoon of turmeric powder with ¼ tsp freshly ground black pepper powder twice a day.

Start with small dose and increase gradually. Avoid taking it on an empty stomach. You can also prepare DIY Turmeric Capsules.

It is highly recommended to take this paste after/with meals and to avoid taking it close to other medications. (Read Does Turmeric cause acid reflux? Black pepper in GP: Does it cause drug interaction?) Here is the recipe.

You can also make Golden Paste from fresh roots.

Start with small doses such as 1/4-1/2 tsp and if you see no side effects then increase the dose by ¼ teaspoon every week. Continue till reach a dose of 1-2 tsp 2-3 times a day.

Maximum dosage: 1 table spoon 2-3 times a day only advised if you are comfortable taking it and not experiencing gastric side effects.

Turmeric tinctures are considered to be very beneficial as they pack tremendous potency in a small dose; but we have not come across any evidence regarding its efficacy in vitiligo. You may consult an herbalist about this.

Take 10-30 drops 2-3 times a day depending on the condition. It can be added to teas, juices or smoothies.

This is a good option for tea lovers and who want to skip the taste of turmeric paste. Here is the recipe for Turmeric Tea.

This is just perfect when it comes to combating pain naturally. You can find the recipe for Turmeric Milk here.

The recommended dosage for supplements is 300-400mg 2-3 times a day for standardized 95% curcumin extract.

However the dose would differ based on the formulation, hence it is best to consult a doctor before taking turmeric supplements.

Avoid taking supplements on an empty stomach and close to the time of taking medicines. Consult a doctor before taking turmeric supplements.

How To Use Turmeric Topically For Vitiligo?

You can apply turmeric powder for vitiligo topically. Conduct a patch test prior. Take sufficient amount of turmeric powder and mix it with oil, preferably coconut or olive oil, and apply it to affected area.

Leave it on for 30 minutes at least and longer if possible. Cover the area with gauze if needed. Repeat 2-3 times a day.

Turmeric in diet is absolutely safe. Turmeric supplements should be taken with care. (Read Side effects of Turmeric)

If you are taking blood thinners, turmeric supplements should be avoided. Turmeric can be included in diet in small doses. If suffering from a bleeding disorder consult a doctor and herbalist or naturopath before taking turmeric.

Turmeric supplements should be avoided in case of gall bladder obstructions. (Should you take turmeric if you have gallstones?)

If harrowed by turmeric stains here is how you can take care of them.

Turmeric, when incorporated in diet, can work as an antioxidant and anti-inflammatory agent and thereby benefit in vitiligo.

Ayurveda, traditional Indian medicine, also supports the use of turmeric in vitiligo. Topical application of turmeric may benefit in vitiligo. If you have tried turmeric for vitiligo do share your experience below as comments.