Muscle spasm is a contraction of muscles without conscious control. It can involve a group of muscles or organs or blood vessels.

It is characterized by stiffness and soreness of muscle followed by an outburst of pain.

Muscle cramps also involve contraction of muscles but are episodic in nature while twitching is minor contractions in a localized area caused by abnormal functioning of a nerve.

Muscle spasm is caused due to any abnormality involved in contraction and muscle functioning. Few of the suggested causes are:

Pain and fatigue in the muscle are signs of overexerting the muscle. If these signs are ignored then energy required to relax a muscle can be lost leading to spasm and cramp. Improper posture can also lead to muscle spasms.

Loss of fluids and salts like potassium, calcium, magnesium salts can cause an imbalance in nerves and muscle, thus preventing muscles from recovering appropriately. This loss can occur in the form of excessive sweating, vomiting or diarrhea.

Certain disorders cause a deficiency in muscle enzymes which affects the energy supplied or required by muscle thus causing spasms.

This disorder causes stiffness in a muscle due to delayed relaxation of the muscle. However, contractions similar to those in cramps are not seen.

Muscle spasms are generally harmless and are relieved in a short time span.

However, it depends on the cause. It can lead to tearing in tendons or ligaments or it can turn out to be serious if the fault is in the nerves.

Turmeric has a long history of use in Ayurvedic medicine to treat pain and inflammation. This article is dedicated to acknowledging the use of turmeric, a perennial herb, and spice, as an analgesic and antispasmodic against muscle spasms.

In this section, we will understand as to how turmeric makes use of its herbal and pharmacological properties in treating muscle spasms as well go over a few related research studies.

1. It is a natural analgesic and anti-inflammatory action

Each of these factors is either involved in the progression of inflammation or they increase the perception of pain.

Non-steroidal anti-inflammatory drugs (NSAIDS) or pain killers are used at a greater frequency than muscle relaxants due to their activity of COX-2 inhibition. Turmeric is a safer alternative to NSAIDS.

Turmeric’s anti-inflammatory activity involves inhibition of COX-2, blocking metabolism of arachidonic acid which is an important inflammatory mediator released in response to injury and damage and by decreasing the activity and production of inflammatory elements like prostaglandins, interleukins, Tumor Necrosis Factor-alpha.

It also suppresses nuclear factor-kappaB, a protein that modulates main components of inflammation and it prevents adhesion of immune cells to an area of inflammation.

Overall turmeric prevents and controls inflammation and pain induced by it; it can be used to treat spasmodic pain.

2. It is a natural muscle relaxant and relieves spasms

Review of various literature has confirmed the role of turmeric as an antispasmodic agent. The muscle relaxant effect of turmeric has been explored in conjunction with another herb (Butea frondosa) in animal model.

High dose curcumin is found to have muscle relaxant effects similar to diazepam. Turmeric’s long proven anti-inflammatory and antispasmodic activities, as well as the results of this study, confirm its status as a muscle relaxant.

The results suggested that curcuminoids control spasm and bring about relaxation by depending or independently of receptors involved in muscle motor activity.

This could be of relevance to pain during the menstrual cycle and pain related to gastric discomfort.

The results of this study suggested that curcumin acts by reducing the blockage in the calcium channel.

It is important to note that calcium ions link proteins present in the muscle when stimulated by neurons and this movement leads to the contraction of muscles.

Recapture of the calcium ions and releasing the link of the proteins is necessary for muscles to relax which as per this study is brought about by curcumin. 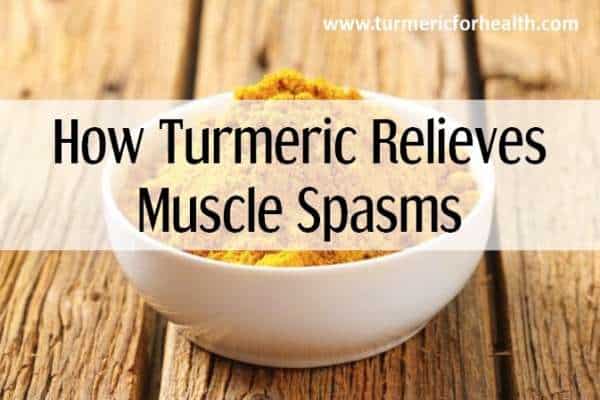 Though no direct studies have been performed on the action of turmeric on common musculoskeletal spasms such as back pain or neck pain, we shall explore a study wherein turmeric deals with the same symptoms as in skeletal muscle pain.

Delayed onset muscle soreness (DOMS) is the pain and stiffness felt in muscles due to unaccustomed strenuous exercise. The symptoms are similar to those seen in muscle contractions.

After 48 hours of strenuous exercise maximum soreness was observed and muscles could not be flexed.

The swelling was also observed.

Local application of turmeric boosted the effect of ice massage.

The study indicated that anti-inflammatory property of curcumin helped in reducing pain and swelling by lowering histamine (substance involved in allergic and inflammatory response) levels and promoting the adrenal gland (organ that is mainly involved in stress response) to secrete hormones that would reduce inflammation.

4. It relieves spasmodic pain in IBS

A study conducted on the effect of turmeric extract on symptoms of IBS showed significant improvement in patient’s condition.

1 or 2 tablets of standardized turmeric extract were given for 8 weeks. IBS reduced by 53% and 60% compared to prior treatment score in 1 and 2 tablet group respectively while abdominal pain reduced by 22% and 25% in each group.

Biliary dyskinesia is a disorder that affects motility in the gallbladder: an organ responsible for storage of bile and aids in digestion. One of its main symptoms is episodic spasm in the upper right area of the abdomen.

The effect of turmeric on this pain along with a herb (Celandine) that improves the effect of bile was evaluated and it was observed that reduction in the spasmodic pain was rapid in comparison to placebo-treated group within one week of treatment.

Dosage of Turmeric For Muscle Spasms

Turmeric is absolutely safe in the diet. You can include as much as 1 tsp of turmeric powder in cooking every day.

Turmeric and curcumin do not dissolve well in water and therefore need to be taken with fats and black pepper for better absorption.

Start with ¼ tsp a day and if you observe no side effects keep increasing the dose by ¼ tsp every week till you reach 1-2 tsp 2-3 times a day.

You can opt for higher doses if it suits you. Here are 10 easy awesome ways to use Golden Paste.

It is best to take Golden Paste after meals and avoid taking it close to other medication consumption.

Other delicious recipes include Turmeric Milk and Turmeric Tea which can be taken as 1-2 cups a day.

If you need help identifying a good brand of turmeric please check our recommendations on organic turmeric.

Dietary turmeric is very safe but a few precautions need to be considered when it comes to turmeric supplements:

Curcumin found in turmeric is known to interfere in drug metabolism. Hence it is advised not to take curcumin supplements concomitantly with any other medicine.

Any individual is prone to muscle spasms. A healthy diet, proper stretching exercises and reducing stress and strain on muscles can reduce the likelihood.

Turmeric is a potent anti-inflammatory agent. Turmeric can alleviate pain and inflammation associated with muscle spasms and serve as an alternative to painkillers.

As an antispasmodic agent, it has been reported to reduce swelling and heal sprains.