NO, dietary turmeric does not cause kidney problems. Consumption of turmeric in the diet is good for kidney health.

However, due to its oxalate content and the presence of certain minerals, high doses of turmeric spice should be avoided by those who are instructed to minimize dietary oxalate and potassium, etc.

Let us know more about the effect of turmeric on kidneys. 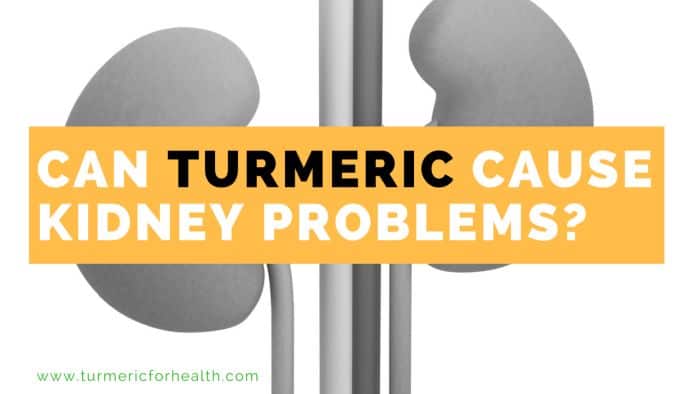 Turmeric and its active components curcuminoids promote kidney health by protecting it from damage and injury. These effects are due to its anti-inflammatory and antioxidant properties.

Kidney injuries may be caused by several diseases, chemicals, drugs, and metals.

It protects the kidneys from the toxic effects of drugs like cisplatin (anticancer drug), gentamicin (used to treat infections), cyclosporine A (immunosuppressant drug), adriamycin (chemotherapeutic drug), diclofenac sodium (used for pain relief) and chloroquine (used for the treatment of malaria).

Injury to kidneys caused by chemicals like sodium fluoride, ferric nitriloacetate and heavy metals like chromium, cadmium, mercury, copper, arsenic, and lead can be reversed by curcumin.

Being a potent anti-cancer agent, turmeric can prevent and treat cancer of the kidneys by inhibiting the growth and progression of cancerous cells.

It could also prevent the formation of calcium oxalate stones in kidneys by reducing the concentrations of stone forming constituents in urine.

The above article discusses some more of these benefits in detail.

Thus, the consumption of turmeric in the diet is recommended for the benefit of kidneys and protection from several kidney disorders.

.. But Turmeric contains oxalates and minerals

Turmeric contains oxalates which form salts by combining with certain metals. High level of oxalates may cause the formation of calcium oxalate which is the constituent of about 80% of kidney stones.

Turmeric has 91% soluble oxalates which can raise urinary oxalate secretion in susceptible individuals.

Dietary consumption of turmeric provides fewer oxalates which are within the permissible limits. Also, studies have shown that dietary oxalates from natural foods may not be the cause of kidney stones. Thus, turmeric is unlikely to raise oxalate levels.

However, care should be taken while consuming turmeric supplements, primarily by those who are at risk of developing kidney stones.

This is because high-risk individuals tend to absorb and synthesise more oxalates.

Supplemental dosages of turmeric by such people, which contains more oxalates than the average amount consumed in the diet, may pose a risk of kidney stone formation.

Though dietary intake of turmeric will not cause significant differences, consumption in high amounts may cause issues.

Therefore, due to the risk of increasing the content of oxalates and certain minerals, it is advised to limit intake of turmeric powder by individuals having kidney disease or its risk.

However, for therapeutic use, they can opt for curcumin supplements which primarily contain only the active ingredient curcumin and have negligible levels of oxalates.

A study conducted on the curcumin supplement Curcumin C3 complex reports that the supplement contains just 0.025%of oxalates compared to 9% oxalates in turmeric rhizome powder.

Thus, it does not raise the oxalate concentration and the chances of stone formation even in susceptible individuals.

Turmeric is great for kidney health, but for people who have kidney stone issues, it should be taken in moderation due to its presence of oxalates. In such cases, curcumin supplements can be explored as an alternative to large turmeric powder dosages.

5 thoughts on “Can Turmeric Cause Kidney Problems?”