Prediabetes is a condition where blood sugar levels are higher than normal but lower than what is observed in diabetes.

However, there is a high risk of progressing into diabetes.

More than 100 million Americans have prediabetes or diabetes. If untreated 37% of the individuals with prediabetes develop diabetes in around 4 years.

Individuals diagnosed with diabetes have an average annual health care expenditure of $11,000 to $14,000.

Treatment involves lifestyle changes such as diet changes and exercise leading to weight loss and pharmacological interventions involve usage of anti-diabetic medications or even surgery.

This article explores various ways by which turmeric, a curry spice can help in preventing and reversing prediabetes.

How does turmeric help in prediabetes?

Turmeric is proven to prevent the progression of prediabetes to diabetes. A lot of scientific evidence points towards the therapeutic potential of turmeric and its bioactive constituent, curcumin in prediabetes.

1. Turmeric can help prevent the progression of prediabetes to diabetes 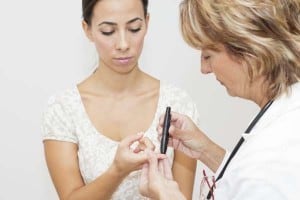 The only clinical trial that demonstrates that turmeric aids in prediabetes is ‘Curcumin Extract For Prediabetes’ by Somlak et al.

This study enrolled 240 individuals diagnosed with prediabetes and they received either curcumin or placebo capsules for 9 months.

High doses of curcumin were given- around 6 capsules a day with 250mg standardized curcuminoid extract per capsule.

A number of biological parameters were recorded to assess progression into type 2 diabetes. After 9 months of treatment, 16.4% of the individuals in the placebo group developed diabetes while none in the curcumin treated group progressed to diabetes.

What does this mean?
Individuals diagnosed with prediabetes if treated with curcumin have reduced risk of developing diabetes. However the dosage of curcumin used in the study is not achievable by dietary means.

An increased risk in cognitive impairment and dementia is observed in prediabetes and diabetes.

Curcumin is a neuroprotective agent (brotects the brain and nervous system) and its use is implied in psychiatric disorders.

Cognitive decline in prediabetes can be reduced by improving blood sugar control. Lee et al have demonstrated that inclusion of 1g of turmeric in the diet (in this case a breakfast of white bread) improves working memory.

Since it was a short study they observed that turmeric brought about this effect independently of insulin resistance and other parameters indicative of disease.

However, researchers concluded that this therapy is favourable as its natural, followed in dietary patterns of Asian countries and unlikely of producing side effects.

What does this mean?
Turmeric can protect from changes in cognition that can occur in diabetes by means of its brain protecting property.

Pancreatic beta cells are those that are involved in the production of hormone –insulin that regulates the blood sugar levels. Dysfunction of these cells can contribute to impaired glucose tolerance in prediabetes.

Studies show that curcumin can protect and enhance the function of pancreatic beta cells. Rashid et al conducted a study on the effect of curcumin on beta cells in experimental diabetes. 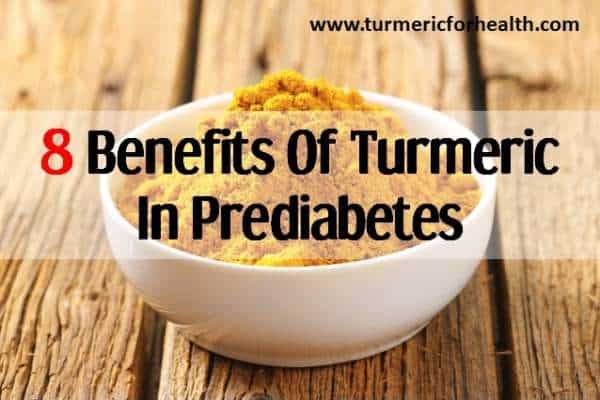 Increased body weight serves as a risk factor for prediabetes. This is because due to reduced insulin sensitivity leads to increased deposition of glucose as fats. Among the lifestyle changes recommended in the treatment of prediabetes, weight loss is a very vital component.

In fact, for every 1kg of weight loss, your risk of developing diabetes reduces by 16%.

Curcumin formulation when administered to obese individuals and supported with changes in diet and exercise has the potential of causing an average weight loss of 1kg in every 10 days.

Research shows that dietary curcumin, by virtue of its antioxidant and anti-inflammatory properties, reduces obesity associated inflammation and insulin resistance.

What does this mean?
Curcumin can accelerate weight loss outcomes of conventional weight loss techniques and this can reduce the risk of prediabetes and type 2 diabetes.

6. It can reduce cholesterol and blood lipid levels

Enzymes involved in fat metabolism play a vital role in the regulation of blood sugar; after all excess blood sugar is stored as body fats.

Hyperlipidemia is a condition characterised by excessively high lipid (fat) levels in the blood. Animal study shows that curcumin treatment reduces cholesterol levels in blood and liver as well as blood lipids.

Research shows that curcumin protects beta cells under lipotoxic conditions from cell death and this will have a favourable impact on blood sugar and insulin levels.

Results from another clinical trial suggest that curcuminoid and piperine combination can help in reducing cholesterol and blood lipid levels in individuals suffering from metabolic syndrome.

What does this mean?
High blood lipid levels and cholesterol can affect pancreatic beta cell function and impair insulin activity. Curcumin is proven to reduce blood cholesterol and lipids in metabolic syndrome.

7. Curcumin is a natural anti-diabetic agent

Curcumin has anti-diabetic and blood glucose lowering properties. Medications prescribed in diabetes treatment are also administered in case of prediabetes. 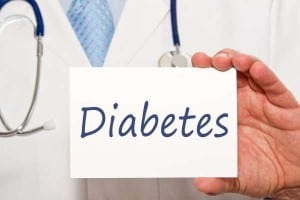 Metformin, an anti-diabetic drug, reduces blood sugar levels by inhibiting the production of glucose in the liver and to do this it regulates the activity of AMPK.

Kim et al have shown that curcuminoids also follow the same route in order to reduce blood sugar and their potency is 400-100,000 times that of metformin.

Glitazones is another class of anti-diabetic drugs that increase sensitivity to insulin.

Animal study suggests that curcumin’s ability to lower blood glucose and improve insulin sensitivity is comparable to rosiglitazone and curcumin can serve as an adjuvant therapy in diabetes.

A study in humans shows that curcumin supplementation with glyburide, an anti-diabetes medication, increases the therapeutic efficacy of glyburide and improves cholesterol levels without causing an excessive reduction in blood sugar.

What does this mean?
Curcumin’s natural anti-diabetic and blood sugar lowering properties is comparable to that of anti-diabetic medications which are also prescribed in treatment of prediabetes.

8. Turmeric can attenuate complications of prediabetes

Diabetic nephropathy is damage to the kidneys caused by diabetes. Review studies state that curcumin has a protective effect on kidneys in diabetes.

A clinical trial in diabetic population demonstrates that around 500mg turmeric taken daily for 2 months attenuates excretion of protein in urine and reduces inflammatory parameters in diabetic nephropathy.

Diabetes complications can even spread to the eye leading to loss of vision. This condition is called diabetic retinopathy.

Meriva, a specialized formulation of curcumin, brings about improvement in diabetic retinopathy in humans.

Diabetic micro and macrovascular complications affect the blood vessels and their functioning. Curcumin is a cardioprotective agent- protects the heart and blood vessels from damage.

Clinical trials in humans show that curcumin improves blood vessel function and reduces the risk of atherosclerosis in humans suffering from diabetes.

Hypertension or increased blood pressure is one of the consequences of prediabetes. Curcumin by means of its antioxidant property reduces oxidative stress (imbalance between prooxidant and antioxidant agents) and relaxes blood vessels; thus reducing hypertension.

What does this mean?
Curcumin’s anti-inflammatory, antioxidant, antidiabetic properties protect various organs and systems in the body from diabetic complications.

Dietary turmeric can help prevent prediabetes. A more therapeutic way of incorporating turmeric in your diet is The Golden Paste. Just 1 teaspoon of this preparation 2-3 times a day can help.

You can include The Golden Paste in soups, curries, rice preparations and even smoothies etc. Here are a few recipes.

If opting for turmeric supplements please consult your doctor for appropriate dose and to void out drug interactions.

Some studies do show that you require higher than dietary levels of turmeric in order to reverse prediabetes.

If you need help determining good brands of turmeric powder and supplements, then we have got a good resource right here.

Turmeric supplements are the ones you need to be cautious about since they contain a high proportion of curcuminoids which may have drug interactions.

Turmeric supplements are to be avoided in case of:

It is generally advised to avoid turmeric supplements when taking anti-diabetic medications since their combined effect can cause an abnormal reduction in blood sugar. However, no study proves this.

Dietary turmeric is not likely to pose any problem.

Prediabetes is a condition that can be reversed by changes in lifestyle and pharmacotherapy. Curcumin’s multifaceted role holds promise as an adjuvant or natural therapy in prediabetes treatment.

In case you are diagnosed with prediabetes, it is highly advisable to include turmeric in your diet.

10 thoughts on “8 Benefits Of Turmeric In Prediabetes”