Down syndrome or Trisomy 21, caused by a genetic condition is a birth defect that is incurable.

It happens when a baby is born with an extra chromosome-21 copy and has a total of 47 instead of the normal 46 chromosomes.

The extra chromosome affects the way the brain and body develop and causes a host of birth defects, ranging from mild to severe.

Half of the children affected by Down’s syndrome suffer from congenital heart disease.

They are also at an increased risk of developing other medical complications like gastroesophageal reflux and celiac disease, hearing, and vision problems.

Affected individuals experience a gradual decline in cognition as they age.

Down syndrome increases the risk of Alzheimer’s disease as the personages.

It may further increase the risk of other neurodegenerative diseases like Parkinson’s and dementia.

Although no permanent cure is available as of now for Down syndrome, its development can be managed.

Turmeric, a spice common in South Asia plays an important curative role in the treatment of Down’s syndrome.

Turmeric is a popular Indian spice used to add zest to foods and curries. Its consumption has been proved to be safe and effective.

Curcumin, an active ingredient found in turmeric has shown significant activity in the treatment of digestive, neurodegenerative and inflammatory disorders along with other health conditions.

Most importantly, turmeric was found to be effective even at low doses with little or no side effects at high doses.

Various pharmacological properties of turmeric can be beneficial for Down’s syndrome.

1. It has antioxidant activity

An increase in reactive oxygen species results in the oxidative damage of DNA, lipids, and proteins. Oxidative stress, in turn, is associated with the pathogenesis of Down’s syndrome.

It is thus important that people with Down’s syndrome incorporate anti-oxidants to control the oxidation.

Turmeric is a powerful antioxidant. An observational study published in Molecules in 2010 examined the effect of various antioxidants for the treatment of various neurodegenerative diseases.

The study reported that curcumin from turmeric can scavenge free radicals and increase the body’s cellular defenses against oxidative stress.

The study also concluded its use to be beneficial in the treatment of neurodegenerative diseases.

A study published in recent patents on CNS drug discovery in 2012 examined the effects of curcuminoids on various neurodegenerative diseases including Down’s syndrome.

Results suggested that curcuminoids attenuate oxidative stress induced by mitochondrial dysfunction (mitochondria are cell organelles that benefit in cell respiration and energy) that can be helpful in treating Down’s syndrome.

What does this mean?
Curcumin and curcuminoids found in turmeric have found to be helpful in reducing oxidative stress caused by mitochondrial dysfunction associated with Down’s syndrome.

2. It has anti-inflammatory defenses

Immune responses are considered to be essential for neuroregeneration.

An observational study conducted by Kim et al. in 2012 suggested that curcuminoids found in turmeric exert inflammatory responses towards inflammatory cytokines and other mediators causing inflammation in neurodegenerative diseases.

The study emphasized that curcuminoids may be helpful in preventing the progression of neurodegenerative diseases that worsen due to inflammation.

A study published in Aggarwal et al. in 2009 reported that curcumin in turmeric regulates mediators like cytokines, protein kinases, transcription factors, adhesion molecules and enzymes that cause inflammation.

What does this mean?
Curcumin suppresses pathways that mediate inflammation. The anti-inflammatory property of curcumin can prevent progression of inflammation in downs syndrome thereby preventing worsening of the condition. 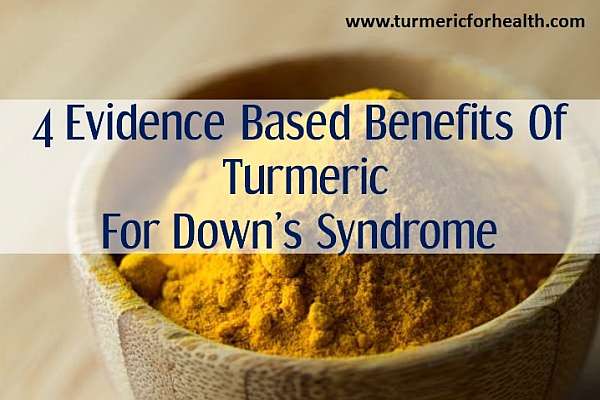 3. It has neuroprotective activity

As mentioned earlier, the progression of Down syndrome can lead to other medical complications and cause the development of neurodegenerative diseases like Alzheimer’s disease, Parkinson’s disease, and dementia.

A study carried out by Mishra et al..in 2008 suggested that Curcumin plays an important role in the prevention and treatment of Alzheimer’s disease. It reduces the accumulation of beta-amyloid plaques and delays the degradation of neurons.

Its anti-inflammatory, antioxidant properties and reduction in microglia formation, all contribute to the improvement of memory in patients with Alzheimer’s.

An animal study published in Biofactors in 2013 showed that curcumin is capable of preventing or delaying the onset of several neurodegenerative diseases like Parkinson’s, Alzheimer’s and Huntington’s.

An observational study by GM et al. in 2007 emphasized that curcumin has at least 10 known neuroprotective functions and can prevent age-related neurodegenerative diseases.

It is considered safe and has high neuroprotective efficacy even at low doses.

The neuroprotective efficacy of turmeric is mainly due to its anti-inflammatory, anti-oxidative properties and ability to prevent aggregation of proteins.

What does this mean?
Down syndrome poses a risk of developing other neurological diseases. The development and progression of these neurodegenerative diseases can be prevented by consuming turmeric. Curcumin found in turmeric has great neuroprotective efficacy and is considered safe for consumption. It is effective even at low doses.

A study published in the American journal of epidemiology in 2006 demonstrated that turmeric was added to curries and given to the elderly.

The results showed that the mental state of subjects consuming this curry was better as compared to the control group.

The study concluded that consumption of curcumin in curry improved cognitive performance.

Though this study is in older population, taking into account curcumin’s neuroprotective activity, it may help in protecting cognition, memory and mental health as well.

What does this mean?
Cognitive impairment is  observed in patients with Down syndrome. Since various research studies have suggested that curcumin in turmeric has therapeutic properties for improving cognitive function, it can be helpful for patients with this condition.

Dosage of Turmeric For Down’s Syndrome

Dietary turmeric is considered safe for consumption and can be included in the diet on a daily basis by patients suffering from this condition for positive results. However, there is no specific dose for turmeric.

Consumption of turmeric must start with small doses such as ¼-1/2 tsp a day for a week and if no gastric side effects are seen the increase the intake gradually by ¼-1/2 tsp every week.

Avoid taking turmeric on an empty stomach and if taking large doses avoid taking it the same time of taking medications.

Maintain a 3-4 hour gap to avoid interaction of turmeric with the medicines. (Read Does Turmeric cause acid reflux? Black pepper in GP: Does it cause drug interaction?)

If one is suffering from a bleeding disorder, small doses of turmeric in the diet are safe but it is best to consult a doctor before taking turmeric or turmeric supplements in this case. (Read Is turmeric a blood thinner?)

A general precaution needed to be taken before incorporating turmeric in the diet is that turmeric may have drug interactions with stomach acid reducing medication, antidepressants, blood sugar reducing drugs, etc.

Curcumin, active ingredient found in turmeric is known to interfere in drug metabolism. Hence it is advised not to take curcumin supplements concomitantly with any other medicine.

Down syndrome is one of the most common neurodegenerative diseases leading to intellectual disability.

Several research studies have highlighted the benefits of curcumin, the bioactive compound found in turmeric.

Curcumin has played an effective role at numerous levels for treating and preventing various neurodegenerative diseases.

Its therapeutic properties like anti-inflammatory, anti-oxidant, anti-protein aggregation, neuroprotective among others are highly effective.

Including turmeric or its supplements in the daily diet can prove to be helpful for patients with Down syndrome.