The distinct symptoms are alternating periods of mania and depression.

It is a psychological disorder commonly seen in patients with first degree relatives suffering from a similar disorder.

It occurs due to an imbalance of neurotransmitters (chemicals which help transmit signals in the brain).

During the mania episode, the patient feels overly joyful and excited whereas in the depressive episode intense sadness or hopelessness occurs.

All of us experience such blues and periods of excitement, but these episodes are severe, intense and frequent in case of psychological disorders.

This disease is not limited to mood swings. Anxiety, post-traumatic stress disorder, alcohol or substance abuse and even obesity are likely to occur with it.

Based on the intensity, there are different types of bipolar disorder.

A lot of research has been conducted on turmeric’s neuroprotective effect which could be of value in controlling this disorder.

How does turmeric help in bipolar disorder?

Turmeric is a herb and a spice native to India and Asia. It has been used since ages in traditional medicine to treat various disorders.

Curcuminoids and its oil fraction are said to have biological activity.

Anti-inflammatory, anti-oxidant, anti-tumor, anti-microbial are few of its pharmacological properties. 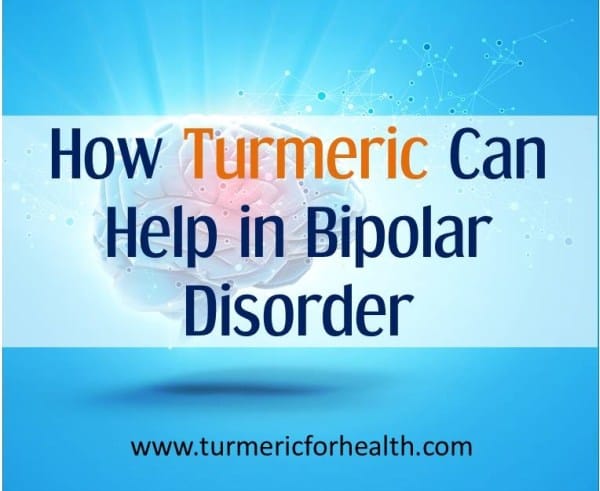 The brain is susceptible to oxidative stress due to the limited presence of antioxidant enzymes, high oxygen requirement, and presence of lipids.

Oxidative stress is an imbalance between pro-oxidant species and antioxidants which can lead to tissue damage and organ failure.

A number of genetic and environmental factors such as infection, malnutrition, psychological stress cause oxidative stress in bipolar disorder.

In a study analysing the oxidative stress occurring in bipolar patients, blood samples were collected.

The blood-brain barrier (a protective barrier that protects the brain from foreign substances) is disrupted in patients suffering from bipolar disorder allowing reactive oxygen species to permeate.

The activity of antioxidant enzymes is impaired in this disorder and increased oxidative stress can increase risk of developing heart diseases.

This is one interesting study I stumbled upon. Violent suicidal behavior is associated with a mutation in a gene linked with body’s antioxidant defence.

Its antioxidant activity is as strong as Vitamin E and C. Curcuminoids are potent antioxidants.

The different mechanisms by which turmeric exhibits its antioxidant property are :

Curcumin is proven to increase the levels of antioxidant enzymes and prevent oxidative damage in periods of mania occurring in bipolar disorder.

In an animal model, turmeric is found to be as effective as fluoxetine, a popular antidepressant (Prozac) in terms of improving antioxidant defences.

What does this mean?  Bipolar disorder is characterised by weakened antioxidant defences and turmeric can act as an antioxidant and prevent oxidative damage.

Inflammation in bipolar disorder occurs as a result of oxidative stress.

A review study indicates that the levels of pro-inflammatory chemicals in an individual differ depending on the way that person is feeling (mania or depression).

Research proves that the immune system in such patients is impaired.

High levels of immune cells and pro-inflammatory chemicals are found in people suffering from bipolar disorder.

Inflammation can affect thinking and other related abilities in the patients.

Microglial cells are a type of immune cells found in the brain.

Different genes activate these cells either to cause inflammation or to treat it. Microglial activation is observed in bipolar disorder.

Turmeric is known for its anti-inflammatory property.

In fact it is found to be better than NSAIDs (common painkillers). Curcumin also helps in reducing inflammation by preventing microglial activation.

To control inflammation turmeric inhibits the activity of :

What does this mean?  Turmeric offers neuroprotection by suppressing inflammation which can help in controlling symptoms of bipolar disorder.

3. Turmeric regulates the activity of proteins vital for brain functioning

Brain derived neurotrophic factor (BDNF) is a protein that regulates brain activity and memory. The levels of this protein are altered in bipolar disorder patients.

What does this mean?  Turmeric influences the activity of proteins that are vital to brain functioning. This is of importance with respect to treatment of neurological disorders.

4. Turmeric acts as an antidepressant

Curcumin acts in a similar fashion but it can target multiple proteins or pathways at the same time to help alleviate depression.

Animal studies have been conducted to prove the neuroprotective and antidepressant effect of curcumin and other bioactive constituents of turmeric.

A study was conducted wherein patients with a major depressive disorder were given fluoxetine (Prozac) and curcumin individually or in combination.

The response was highest in the combination group (77.8%) while in fluoxetine it was 64.7% and in curcumin 62.5%. This was the first study to suggest curcumin as a replacement for Prozac.

Combination of curcumin and piperine (active constituents of turmeric and black pepper) is found to enhance the effect of antidepressants by increasing serotonin levels.

A combination of curcumin and St. John’s wort is also said to help in depression by increasing serotonin.

At the end of the trial, a significant reduction in anxiety and depression was observed in the group taking curcuminoids compared to control group.

Researchers concluded that curcuminoids-piperine combination can be given as add-on therapy to standard treatment.

What does this mean?  Turmeric is as effective as standard antidepressants in treating major depressive disorder.

5. Turmeric acts as an anticonvulsant and helps control mood swings

Anticonvulsants are used in the treatment of bipolar disorder as a mood stabilizer.

It is not used to treat seizures but to control mood swings.

They help in controlling mania and depression and help in stabilizing mood and preventing relapse.

Turmeric oil is proven to have anti-convulsant property.

In an animal model of seizure, curcumol (a bioactive component obtained from turmeric rhizome) is proven to suppress seizures, reduce susceptibility to seizures and prolong the intervals between recurrences of seizures.

Ar-tumerone and curcumin are also proven to be therapeutic in case of convulsions.

What does this mean?  Curcumin and other bioactive constituents of turmeric possess anti-convulsant property.

The anti-anxiety potential of curcumin has been proven in an animal model.

Docosahexaenoic acid (DHA) is an essential fatty acid that is vital for proper brain functioning.

The deficiency of this fatty acid can lead to neurological disorders like anxiety.

Curcumin complements the action of DHA on the brain, promotes DHA synthesis and reduces anxiety-like symptoms.

What does this mean?  Curcumin effectively controls anxiety like symptoms which are also observed in bipolar disorder.

One of the common reasons why most patients abandon regular treatment is the weight gain and metabolic disturbances caused by medications used to treat bipolar disorder. And turmeric has a remedy for that too!

The different mechanisms involved are:

This makes it suitable as an adjuvant therapy or an alternative to regular medications.

Dietary turmeric is safe. Include turmeric in your curries, rice preparations, smoothies or any other food item you like.

One can safely take 1 tsp of good quality turmeric powder day without issues.

Be careful while taking curcumin capsules.

It is best to make turmeric as part of your diet. You can also brew turmeric tea or consume it as turmeric milk or golden paste.

Adding black pepper to turmeric preparations will increase its absorption and pharmacological action in the body. Read more about it here>

Although turmeric is a herb, it is wise to consult a physician before taking turmeric supplements.

Turmeric can definitely be used individually or as an add-on to standard therapy when it comes to anxiety, depression, mood swings, and bipolar disorder.

We have received a lot of appreciation for our articles on turmeric and its therapeutic value. This article is our gift to everyone in general and especially to those suffering from psychiatric disorders.

Most of us generally say, ‘Nothing is wrong with you. It is just in your head.’ And definitely it is.

But our head does not just consist of our thoughts alone. There is a master organ called a brain which governs our thoughts.

We have emphasized on details as to what exactly occurs in our body when we suffer from this disease, just to point out that like every other organ, our brain also fails sometimes.

For those of you who know loved ones suffering from this disorder, kindly share this article with them and support.

25 thoughts on “How Turmeric Can Help in Bipolar Disorder”