Anemia is the most common blood disorder which is characterized by reduced production of red blood cells.

Red blood cells or Erythrocytes are a type of cells that are present in the blood and contribute to health by transporting oxygen to all parts of the body.

Hemoglobin is the protein present in these cells that bind to oxygen and helps in delivering oxygen to all parts of the body.

Anemia occurs when there are not enough red blood cells or if they do not function properly.

There are several types of anemia but they are mainly classified as:

Moderate iron deficiency affects around 8.8% of the world population.

Can Turmeric help in Anemia?

Since Anemia is a disorder of red blood cells whose prime function is to transport oxygen it is highly like that the antioxidant defense of the body is impaired. Anemia is marked by oxidative stress or imbalance of pro-oxidant and antioxidant agents in the body.

Dietary turmeric is not found to interfere with dietary iron absorption. Curcumin, on the other hand, is a proven iron chelator.

Turmeric is a very potent natural antioxidant. Curcumin and other curcuminoids are strong antioxidants with activity comparable to Vitamin C and E. Hence turmeric should be beneficial for Anemia. Also, turmeric is a rich source of iron.

What does this mean?
So by virtue of its antioxidant property, curcumin or rather turmeric should benefit in Anemia. 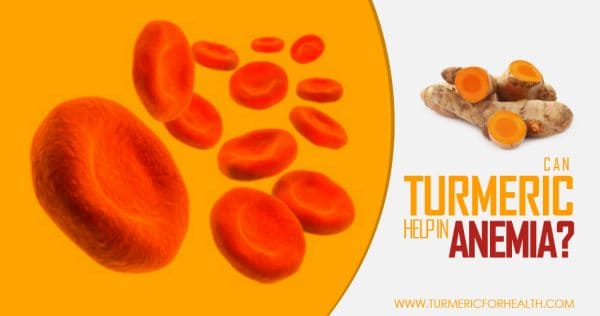 But the catch here is the iron chelating property of curcumin. Iron deficiency is the leading cause of Anemia and curcumin chelates iron. It binds to iron and forms a complex that is excreted from the body.

In the presence of curcumin, both these proteins were found to increase in concentration thereby indicating iron depletion.

Ferritin is a protein that stores iron in cells for later use and iron chelators prevent the production of this protein. Interestingly curcumin also acts in the same manner.

Most of the animal studies that have been published haven’t reported that curcumin could have adverse effects on spleen or iron status. But interestingly a subsequent study by the same researchers shows that curcumin supplementation for 6 months in animals caused a decrease in iron stores but not zinc and copper stores.

Based on these findings researchers feel that curcumin supplementation may aggravate the risk of iron deficiency in the Western diet.

However, this iron chelating activity of curcumin is beneficial in the treatment of diseases like thalassemia, cancer, cardiac diseases, and brain-related diseases.

Robert .T.Means in his article Ironing Out Complementary Medicine discusses these studies as well as their limitations.

However, based on these findings he poses a number of clinically relevant questions:
• Can high doses of curcumin help as a clinical chelator in heavy metal toxicity?
• Would curcumin’s iron chelating activity limit its use as chemotherapeutic agent in patients with fewer iron stores?
• Would women suffering from excessive blood loss due to menstruation or gestation have to use curcumin with caution?
• Could curcumin exacerbate Anemia?

Quite a number of studies prove that curcumin has good chelating properties that could be useful in the treatment of heavy metal toxicity.

There have been no reported cases of curcumin causing iron deficiency in cancer patients practically but it is true that iron chelation is one of its mechanisms of anti-cancer activity.

Turmeric in the diet is permissible in gestation but curcumin supplements are not recommended. Women with heavy menstruation have reported regular and reduced bleeding on taking curcumin or turmeric.

Coming to whether curcumin could exacerbate Anemia, well that is something that requires clinical trials. However, curcumin is found to be beneficial in a different blood disorder, thalassemia.

What does this mean?
Animal studies show that curcumin has iron chelating property which may supposedly increase the risk of iron deficiency.

Dietary turmeric powder does not interfere with dietary iron absorption

But how far does this iron chelation activity of turmeric come into action in real life? A study published in The Journal of Nutrition, 2006 examined the effect of chilli and turmeric on dietary iron absorption.

Both chilli and turmeric contain phenolic compounds and their structure is such that they bind to iron. Thereby they should interfere with intestinal absorption of iron.

What does this mean?
A study shows that turmeric powder despite of its phenolic compounds does not affect iron absorption from diet. So turmeric as a herb or in diet would not cause iron deficiency by inhibiting dietary iron absorption.

Turmeric in the diet is absolutely safe. You can reap benefits of turmeric as an antioxidant in Anemia by taking The Golden Paste. Turmeric powder contains 3-4% curcumin. The blend of turmeric with black pepper and fats increase its absorption in the body.

1-2 teaspoons of Golden Paste a day should help. Here are some easy ways to use The Golden Paste.

Based on current research we would definitely not recommend curcumin supplements for Anemia. A few conditions in which curcumin supplements should be taken with caution are:
• Pregnancy and lactation
• If suffering from gallbladder issues
• Prior to surgery
• If taking blood thinning medications, blood sugar lowering drugs, stomach acid reducing medications and certain antidepressants.

Initially, turmeric may cause slight gastric discomfort if you are taking it for the first time, but it should disappear gradually. Excess intake of turmeric can cause gastric symptoms.

Dietary turmeric is not found to interfere with dietary iron absorption. Curcumin, on the other hand, is a proven iron chelator.

Speaking of real life evidence, there have been no reported cases of iron deficiency with turmeric or curcumin supplementation. So those who have a good store of iron should not worry.

However, those with marginal reserves of iron as in anemia should refrain from taking curcumin supplements; but it is safe to take turmeric.

These conclusions are based on the current status of research on this topic. Also, we cannot forget that turmeric is a good source of iron.

We definitely need clinical trials investigating the role of curcumin supplementation on iron status in Anemia. Turmeric in the diet is safe.

3 thoughts on “Can Turmeric Help In Anemia?”