Spleen is a spongy organ located in the upper left area of the abdomen above the stomach.

It is about the size of a person’s fist. The primary function of the spleen is to purify blood as well as to store blood cells.

Spleen belongs to the lymphatic system: a biological system dedicated to fighting infections and maintaining balance of body fluids.

The spleen consists of two types of tissues:

One can live without a spleen but the spleen is a major hub for production and activity of white blood cells. Therefore its loss can make an individual more susceptible to infections.

However in the absence of a spleen other organs such as liver take up its functions.

Certain diseases can cause the spleen to swell and one can rupture or damage the spleen in case of accidents.

Turmeric is a spice native to India and Asia. Its usage as a herb and spice dates back to the Vedic culture in India.

Turmeric belongs to the ginger family.

It is used in Ayurveda due to its significant medicinal value.

It has a marked anti-inflammatory effect and is also a strong antioxidant.

Pharmacologically coloring matter and volatile oil are the important constituents of turmeric.

The coloring matter consists of curcuminoids: curcumin , demethoxy curcumin, bis-demethoxycurcumin. They are strong antioxidants and amongst them curcumin presents the most potent clinically significant properties.

Turmerone, ar-turmerone and zingiberene are the parts of volatile oil which contribute to the aroma of the spice.

According to Chinese medicine, spleen plays an essential role in health and vitality of the body by turning digested food from the stomach to nutrients and assimilating the nutrients.

Turmeric, as per Chinese medicine, stimulates blood flow and also acts on the therapeutic acupuncture points of the spleen.

A study was conducted to validate the effect of curcumin on immune responses.

Mice were immunized with sheep red blood cells so as to produce antibodies and immune cells in response to these foreign cells.

Curcumin administration was found to increase the number of immune cells in spleen responsible for antibody production within 6 days of immunization.

Turmeric in combination with ginger has found to improve the immune status of immunocompromised mice.

Oral administration of turmeric at 50mg/kg wt and ginger at 120 mg/kg wt was found to reduce the undesirable effects of carbon tetrachloride intoxication by improving immune responses such as production of cell chemicals such as interferon, tumor necrosis factor.

These proteins are necessary to fight infections and toxins.

Polluted environments can cause diseases in various systems of the body. Air pollution can cause exposure to lead which reduces antioxidant capacity of the spleen. 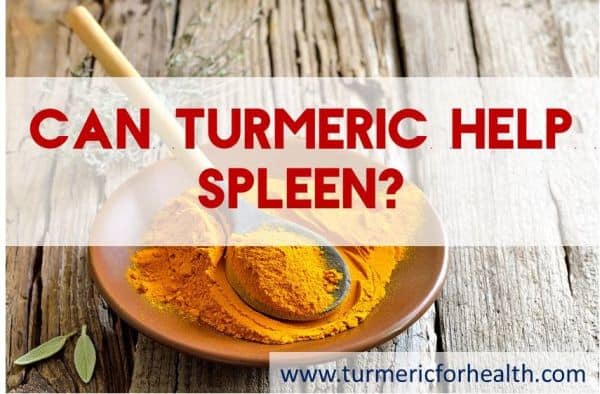 A study focussed on the effect of turmeric on heart and spleen tissues exposed to lead acetate.

Turmeric supplements were provided 3 times a week for 8 weeks and it was found to inhibit the oxidative damage caused by lead to spleen and heart.

These studies reflect that turmeric’s anti-inflammatory, anti-oxidant and immunomodulatory properties influence the overall functioning of the spleen in a positive manner.

Turmeric can be safely consumed as a part of daily diet. Other options available are capsules containing powder, tincture or fluid extracts.

Two of the best ways to consume turmeric powder are through turmeric milk and turmeric paste / golden paste.

It is important to include black pepper or fats in your diet while taking turmeric as otherwise turmeric is poorly absorbed in the body. More info on this here>

It is advisable to take a health practitioner’s consult before consuming turmeric supplements because inappropriate dose or allergic reactions can pose risks to health.

Turmeric is known to have so many amazing benefits that it is also called ‘miracle spice”.

Research indicates that turmeric can impact the working of spleen in positive manner.

Lets start including turmeric in our lives today!