Turmeric is a spice first and then a herb. Most Asian countries have turmeric of different varieties every day in their diet.

Average Indian consumes about 1 teaspoon of turmeric powder every day.

And there is similarly no restriction about turmeric in a diet for children.

There has always been reasonable doubt of which herb is safe for children. Similarly rises the question of how safe is turmeric for children at therapeutic doses?

This article goes over the research on turmeric for children and we have also listed a few traditional remedies involving turmeric that are beneficial for common ailments in children.

Why there is a need for Pediatric dosage for medicines

<Disclaimer : This sections deals with scientific reasons why there is a separate dosage for children for medicines in general. >

Pediatric dosage or dose recommended for children is different from what is prescribed for adults. The reason for this difference is not because they are younger than and not as strong as adults.

Various factors are to be taken into account when prescribing a dose for children.

Pharmacokinetics of a drug refers to the various processes taking place in the body and aiding the absorption, activation and excretion of the drug from the system.

These processes are different in children and a few factors involved are:

Distribution of the drug in children is affected by high total body water content and decreased protein binding. Neonates require a higher dosage of water-soluble drugs than adults due to high body water content.

The decreased protein binding to the drug leads to higher drug availability and increased adverse effects even at low doses.

Metabolism of the drug depends on the development of the enzyme system in the gastric system. The activity of these enzymes differs in different age groups of children as well as within the same age group.

Metabolic rates in children are way higher than in adults, thus causing increased frequencies of dosage.

Elimination of drug depends on kidneys mainly and a child achieves adult-like kidney functioning at 2 years of age.

Based on these factors dosage for children are prescribed from adult dosage by using age, body weight, and body surface area.

Though this a regular practice, the differences in adult and child physiology can render these doses as unsafe and poor estimates.

What does science say about turmeric’s safety and efficacy in children?

Turmeric is a relished Indian spice and has been claimed as a cure for almost every ailment since centuries.

Yet very few people are aware of the various components of turmeric and the immense research and clinical trials being conducted on them, though none of the trials describe pediatric dosage.

However no study or governmental body regulation confirms this dose.

Turmeric is on the FDA’s GRAS (generally recognized as safe) list. Turmeric exposure through dietary intake has not reported any adverse effects.

In India, the average intake of turmeric in diet is 2-2.5g per day in 60kg individual.

Curcumin, a bioactive component of turmeric, has been greatly researched on due to its therapeutic properties.

Daily intake of curcumin in Indians corresponds to 60-100 mg while studies have shown that no side effects occur even in individuals using up to 8g of curcumin a day.

Adding spices to a baby’s diet is permissible only after 8 months of age. Ayurveda has always recommended turmeric for most ailments for all ages.

Maximum of the Indian population must have used a homemade turmeric remedy at some point of time in their childhood, be it in the form of turmeric milk or turmeric paste over wounds or turmeric and honey mixture to aid colitis. Turmeric has also been used greatly in Chinese medicine and Unani.

Common awareness and experience, as well as age old remedies, do suggest that turmeric is safe for children. However one should keep in mind that every individual is different and every drug might not deliver the same effects in everyone.

Children are susceptible to gastric troubles due to turmeric consumption. Also, only dosages that are recommended by health practitioners should be administered to the child. 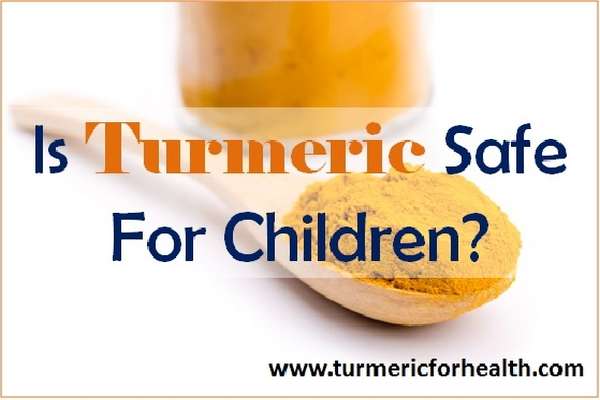 Following studies demonstrate the use of curcumin in pediatric disorders, throwing more light on the safety and efficacy of turmeric in children.

Inflammatory bowel disease (IBD) is chronic inflammation of the intestines and it is associated with abnormal immune responses.

Crohn’s disease and ulcerative colitis are the main types of IBD. Due to its anti-inflammatory properties, Ayurveda recommends the use of turmeric for such disorders.

A study was conducted in Seattle Children’s Hospital, Washington to assess the effect of turmeric on IBD and to observe whether patients can tolerate increasing doses.

11 patients within 11-18 years of age enrolled for this study: five were suffering from Crohn’s disease and six from ulcerative colitis. Curcumin capsules 500 mg were provided to the patients twice a day for 3 weeks.

At week 3 doses were increased to 1 g twice daily and at week 6 it was increased to 2g twice daily. All patients who completed the study tolerated curcumin well and any symptoms reported were not clearly related to curcumin.

Improvement in condition was seen and none of the patients reported worsening of symptoms or relapse during the treatment.

This study demonstrated tolerability of curcumin up to 2g twice a day in pediatric IBD and suggested that individuals can opt for curcumin as an alternative therapy without any side effects.

Oral mucositis is a common complication of chemotherapy. It is characterized by inflammation and ulceration in the mouth.

A study performed on pediatric patients evaluated the tolerability and efficacy of curcumin mouthwash against oral mucositis.

7 pediatric and young adult cancer patients participated in the study. Along with standard preventive oral care the patients were asked to use 10 drops of Curcumall twice per day in a mouthwash during chemotherapy.

Curcumall is a liquid formulation containing natural extract of turmeric and one of its active ingredients is tincture of curcumin c3 complex 95%. The oral conditions were evaluated at 0,7,14 and 21 days.

No adverse effects that could be related to the curcumin mouthwash were reported and a drop in severity of oral mucositis was seen.

The results of the study suggested that curcumin mouthwash was safe and well tolerated in pediatric patients.

Turmeric as Traditional Medicine For Children

The history of turmeric dates back 4000 years in Vedic culture where it was used as a culinary spice and as a herb. Its beneficial effects are well recorded in Ayurveda, traditional Indian medicine system.

Various household and Ayurvedic remedies utilizing turmeric for common ailments have been enlisted below. Turmeric: The genus Curcuma by Ravindra et al (2007) has been used to review these aspects.

No clinical studies affirmatively report an accurate dose of turmeric for children.

Dietary sources of turmeric have proven to be safe till date.

Making turmeric palatable enough for children to consume is not an arduous task due to turmeric’s fame as a culinary spice.

Oral supplements of turmeric are available as standardized powder, capsules and fluid/tincture extract.

However, these should be avoided in the case of children and should be given only if advised by a health practitioner.

Children can be given tincture extracts, but do consult a herbalist about the same.

But most children would refuse to take Golden taste because of its spicy sharp taste.

Turmeric milk is a famous cure-all.

Apart from relieving cold, it is also known to boost immunity and strengthen bones. Boil ¼ teaspoon of turmeric powder in a cup of milk. Cool this mixture and add honey or sugar to taste.

This is the simplified version of the traditional recipe but it is equally potent.

Turmeric can be used as a spice and coloring agent. It can be added to rice, curries, soups and another day to day recipes which your child favors.

Turmeric powder can be mixed with honey to make it more palatable for the child to consume. However, caution should be exercised when using this technique for toddlers. Honey can be replaced with maple syrup in this case.

Children are susceptible to gastric problems by consuming inappropriate doses of turmeric and supplementation must be discontinued in such cases.

Children rarely suffer from gallbladder problems but if your child does have gallbladder issues, then turmeric should be avoided.

Turmeric lowers blood glucose and hence children being treated by antidiabetic drugs should abstain from turmeric. Turmeric can interfere with the body’s blood clotting activity and should be avoided before surgery.

Turmeric finds its prime use as a culinary spice and invades every dish consumed in Asian countries.

Traditionally turmeric has been presented to children as turmeric milk or as a topical application in India and other Asian countries and no harmful effects have been observed.

Though no clinical trials corroborate the use of turmeric in pediatric disorders by prescribing a particular dose, faith in traditional medicine and ancient practices suggest that turmeric is safe for children.

2 thoughts on “Is Turmeric Safe For Children?”