Yes, turmeric as a spice (powder) is high in oxalates. But dietary turmeric (~ 1 tsp daily) is unlikely to cause one’s oxalate levels to rise. However, one should limit the use of turmeric spice, especially if one is at a risk of developing kidney stones or other disorders related to high-oxalate content.

Turmeric is great for overall health and wellbeing. Its potential health benefits run into 100s. But, its high oxalate content is known to cause kidney stones in some cases and thus it is imp to understand if turmeric’s oxalate content can prove to be a problem.

Let us understand this better with the scientific evidence.

Can Turmeric’s Oxalate cause Kidney Issues?

Turmeric does have oxalates, but research says that, if taken as a spice, the quantity is not large enough to cause any serious issues such as kidney stones. 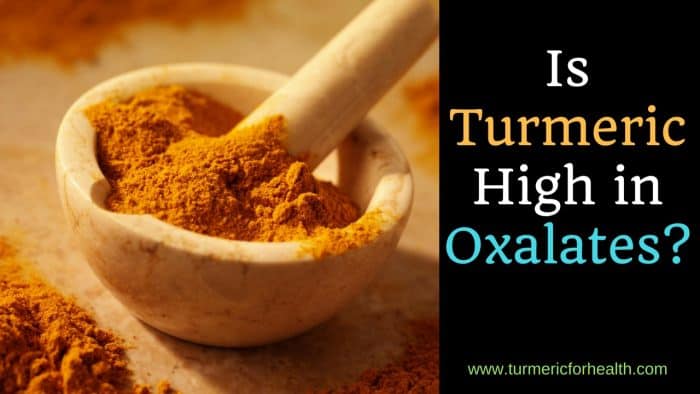 This is discussed in more detail below

Oxalates are of two types: Soluble and Insoluble.

Insoluble oxalates are not of much significance as they do not get absorbed and are excreted from the body.

Soluble oxalates may, however, get absorbed and bind with certain minerals and form oxalate salts.

Turmeric contains about 91% soluble oxalates, which could mean that most of the oxalates in turmeric can get absorbed by the body. [4] [5]

However, this does not happen as the absorption of oxalates by the body depends on a number of factors including intestinal absorption capacity, the transit time of food through the gut and the concentration of some minerals and gut microbiome in the intestines.[6] [7]

Thus, it is estimated that only 2% to 15% oxalates obtained from the diet get absorbed.[8]

The American Journal of Clinical Nutrition reports a study where eleven subjects were given supplemental doses of turmeric for a month which provided 55 mg of oxalates per day.

However, it was noted that the persons who are prone to formation of kidney stones tend to synthesise and absorb more oxalate, which could increase their urinary oxalate levels beyond the permissible limits.[10]

Thus, it could be concluded that though turmeric contains soluble oxalates, its dietary consumption is unlikely to increase oxalate levels. But in case of persons with increased risk of developing kidney stones should limit turmeric intake and avoid large dosage of turmeric. [11]

2. Intake of turmeric is not likely to increase risk kidney stones

The primary concern with oxalate-rich foods is the risk of kidney stone formation.

The salts that are formed from minerals like calcium namely calcium oxalate has been found to be the constituent of 80% of kidney stones[12]. Thus, people at risk of developing kidney disorders are told to avoid high-oxalate foods.

Soluble oxalates can bind to the minerals, and this may reduce the availability of vital minerals to the body. [13]

We have already seen earlier that dietary turmeric does not significantly increase the oxalate levels.

Due to its anti-inflammatory and anti-oxidant effects, it lowers the concentrations of stone forming constituents in the urine and reduces the number of calcium oxalate deposits in the kidney.[14]

According to some scientists, consumption of dietary oxalates does not increase the risk of kidney stone formation. [15]

Thus, the risk of stone formation, just by taking turmeric in diet and in small amounts is low.

Curcumin Supplements – an alternative to Turmeric?

It is important to understand precautions while taking supplements, here are some of the most imp. things to keep in mind when taking curcumin supplements.

2 thoughts on “Is Turmeric High in Oxalates & Cause Kidney Problems?”