Veisalgia or Hangover, as it is more commonly called, is the discomfort one experiences after excessive alcohol consumption. Turmeric, a spice from Asian cuisines and its active ingredient curcumin can help one reduce the effects of hangover and alcohol toxicity. [1]

A hangover can last for a few hours or even for more than 24 hours.

It is characterized by several physiological and psychological effects including headache, nausea, vomiting, fatigue, drowsiness, dizziness, thirst, sweating, depression, fatigue and loss of concentration and cognition.

The cause of hangover cannot be stated with certainty.

However, a number of factors like genetics, immune response, acetaldehyde concentration, ingredients in the alcoholic drink, dehydration, sleep deprivation and smoking, affect the severity of hangover that an individual may experience. [2] [3]

There are many hangover cures available on the internet and popular among the common people. However, few are backed by any scientific evidence.

Scientists have found out that some functional foods when taken before or after alcohol consumption may significantly lower the symptoms of a hangover and the toxic effects of alcohol.

One such useful food for hangovers is turmeric and its phenolic component curcumin. [4]

If you are new to turmeric, please read Introduction to Turmeric first.

Let us find out about the beneficial effects of turmeric in hangovers.

5 Surprising Benefits of Turmeric for Hangovers

Turmeric is tested as one of the best natural anti-hangover medicine. It not only helps in coping the next day physical and metal hangover problems but also removes toxins from the body and protects the liver and brain from ill effects of alcohol. 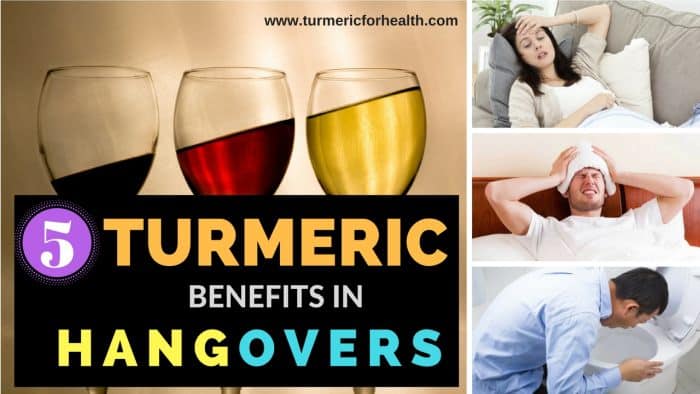 These benefits are discussed below in detail.

As per research, some natural functional ingredients like curcumin from turmeric can prevent hangovers and simultaneously, protect the liver from damage. [5] [6]

The International Journal of Herbal Medicine, in one of its published papers, reports the success of some Indian scientists in developing an anti-hangover drink.

This drink comprised of herbs including turmeric and pepper and was able to reduce several symptoms of a hangover including headache, nausea, and tremors.

The drink, when taken in a specific dosage, was able to nullify hangover symptoms completely and thus was recommended to reduce next day effects of alcohol or cocktail consumption. [7] [8]

Numerous other drinks and formulations have been developed for the same purpose. Among these, a composition containing turmeric extract can be used for relief from certain symptoms like heartburns and dull headaches. [9]

Another drink combines turmeric with alcohol to create a beverage, after drinking of which, hangover symptoms are considerably lowered. [10]

Turmeric in the form of drinks and formulations has been successful in treating hangovers and reducing its symptoms considerably.

According to some of the studies, alcohol, in the form of ethanol, when metabolised by the body, forms toxic substances like acetaldehyde and free radicals, These toxins lead to the generation of oxidative stress which further causes cell injury and affects many bodily functions negatively.

This results in the gastrointestinal and neurological problems of a hangover. Liver, which flushes out toxins, is also damaged and functionally impaired with repeated alcohol intoxication. [11] [12]

The process of alcohol metabolism in the human body is carried out by the conversion of ethanol (the constituent of most alcoholic drinks) to acetaldehyde by the enzyme alcohol dehydrogenase (ADH).

Later, this acetaldehyde is converted to acetic acid by the enzyme aldehyde dehydrogenase (ALDH). The acetic acid is further broken down into carbon dioxide and water and eliminated from the body. [13]

Now, it is the intermediary product acetaldehyde, which is the most toxic, and responsible for causing liver damage, cancer, and hangover symptoms.

To reduce hangover effects, it is required to delay the formation of acetaldehyde and fasten the conversion of acetaldehyde to acetic acid. In this way, the toxin will be present for a shorter duration, and toxic effects will be reduced.

Curcumin present in turmeric is a potent antioxidant and carries out both these functions efficiently. Firstly, it decreases the production of acetaldehyde and free radicals from alcohol metabolism. [14] [15]

Secondly, it increases the activity of the enzyme aldehyde dehydrogenase (ALDH), which speeds up the elimination of acetaldehyde from the body. [16]

A nanoformulation of curcumin with improved bioavailability called THERACURMIN has been developed by scientists, which inhibits the toxic effects of alcohol drinking by reducing the concentration of acetaldehyde in the blood. [17]

This significantly reduces the toxicity, oxidative stress, and hangover symptoms.

Turmeric promotes earlier removal of the toxins which are generated by alcohol metabolism are responsible for causing a hangover.

Hangover includes many psychological effects like decreased memory, depression, anxiety and mood problems. Turmeric and curcumin are neuroprotective in nature and can reduce neuroinflammation, neurotoxicity and amyloid-β protein deposition in the brain. Thus, they can benefit in more than one hangover symptoms. [18] [19]

Curcumin increases the production of serotonin and lowers the adverse effects of alcohol on the brain including sleep disorders, insomnia, consciousness, dementia, and amnesia.[20]

Curcumin can increase the antioxidant status and prevent brain injury induced by alcohol.[21] [22]

There are many studies which show that curcumin improves memory function and cognition. [23]

In cases of memory deficits caused by alcohol, pretreatment with curcumin inhibits the production of nitric oxide in the brain regions associated with memory such as the hippocampus, prefrontal cortex, and amygdala.[24]

Turmeric is an anti-depressant and anti-anxiety agent. Studies have shown that curcumin alleviates inflammation, toxicity and oxidative stress in the brain, which is caused by alcohol and the reason behind psychological problems like depression and anxiety.[25] [26]

Curcumin increases the levels of serotonin and dopamine chemicals which enhances mood and promotes emotional well-being.[27]

Turmeric is gastroprotective in nature and can prevent any damage caused to the stomach and intestinal linings by alcoholic drinks.[28] [29]

There are many studies which show that pretreatment with curcumin can prevent or significantly reduce the formation of gastric lesions and ulcers induced by ethanol and protect the stomach wall from oxidative damage.[30] [31] [32]

Similar effects have been shown by turmeric oil, which is naturally present in fresh turmeric roots. [33]

Turmeric protects the gastrointestinal lining of the stomach from damage caused by alcohol, which further reduces vomiting and nausea in a hangover.

5. Turmeric protects the liver from alcohol side effects

The organ which is worst affected by alcohol consumption is liver. The liver detoxifies the body of many toxins including acetaldehyde, which is produced by alcohol metabolism.

Excessive production of this chemical makes it difficult to eliminate it faster due to which it remains in the body for a longer time and starts causing damage. As a result, several other liver functions are impaired.

Turmeric exhibits hepatoprotective properties and can protect the liver from these damages caused by alcohol. This has been proved by numerous studies.

Turmeric reduces inflammation and oxidative stress in the liver and prevents liver injury and damage. [34]

It improves the levels of certain enzymes in the liver which are markers of liver function. [35] [36] [37]

It also shares the work of regulating the levels of various lipids like cholesterol and triglycerides. This enhances the liver function considerably and protects the liver from disorders like fatty liver disease and alcoholic liver disease. [39] [40] [41]

Turmeric prevents damage and injury caused to the liver by alcohol intake. It promotes liver functioning and speeds up the detoxification process.

Dosage of Turmeric for Hangover

There is no particular dosage of turmeric for curing hangovers.

It might also be useful to take golden paste or curcumin supplements right before or after alcohol consumption. The appropriate dosage of these depends on several factors including, amount of consumption, etc. Thus, a trial and error may be required.

You can try with 1.5 tsp turmeric powder and see the benefits. The quantity can be increased if it does not. A One-off large dosage of turmeric is not going to harm the body. Powder needs to be taken alog with fats (oil) or black pepper.

The bioavailability of turmeric and curcumin are low which means that they are not properly utilised by the body. (Read: How to Improve Turmeric’s Bioavailability?)

The solution to this lies in the golden paste which combines turmeric with healthy fats and black pepper to enhance its absorption.

The recipe to make a golden paste from turmeric powder can be found here. It can also be prepared using fresh turmeric roots. Find the method here.

If you are confused about good turmeric brands, check the list of recommended brands here>

There are curcumin / turmeric drinks also available which are sold as anti-hangover drinks. They can also be tried if you do not want to take powder turmeric.

Precautions to be taken with turmeric

Consumption of turmeric in the diet is considered safe, but some precautions need to be kept in mind. (Read : Possible Side effects of turmeric)

One should abstain from taking turmeric or curcumin supplements during pregnancy, lactation, before surgery and if having gallstones or bleeding disorders.

Individuals with the risk of developing kidney stones or having gout should also limit turmeric intake. Though, a one-off intake is not likely to cause trouble.

(Read : Is turmeric safe in gout? Does turmeric cause kidney stone?)

It is also not recommended to take turmeric on an empty stomach to avoid acid reflux.

Turmeric interferes with the metabolism of drugs in the body. It also affects the functioning of some drugs like anti-depressants, antacids, and anti-diabetic drugs. Thus, concomitant use of turmeric or curcumin supplements with other medications should be avoided.

The available research points out several benefits of turmeric in a hangover. Turmeric can not only prevent and reduce the mental and physical effects of a hangover, but also protect the body from the toxic effects of alcohol consumption.

Taking turmeric before or after alcohol intake may lower headaches, loss of memory, vomiting, nausea, heartburn and liver damage. It improves the mood and fastens the detoxification process.

When taken with precautions, turmeric may help you feel much better after drinking, both physically and emotionally.