Turmeric and more turmeric. What is turmeric? Is it a coloring agent or a spice or a herb or a nutraceutical?

Well, its all of these and that one miraculous plant that can protect and remedy almost any health condition.

The time when turmeric had not received much attention as a medicinal agent, people would generally stick to eating raw turmeric, including turmeric powder in food and boiling turmeric and drinking its extract.

Now that we know about curcumin- the foremost active ingredient of turmeric and its bioavailability issue, we are looking for ways to increase its absorption.

Interestingly people who used it earlier without knowing the absorption issue still reaped its benefits. Especially Turmeric Milk, 1 cup of that elixir and your cold would be gone.

So what exactly were these people doing? Did cooking turmeric actually aid in enhancing its therapeutic benefits?

Do you need to cook turmeric to get its benefits?

The recipe for Golden Paste calls for black pepper, oil, and cooking – all of these 3 enhance curcumin’s absorption. So how vital is it to cook turmeric to get the health benefits?

Researchers at Oklahoma Medical Research Foundation have investigated the solubility of turmeric and curcumin after exposure to heat.

In their first study in 2007 Kurien et.al reported that curcumin’s solubility in water could be increased from 0.6 microg/ml to 7.4 microg/ml.

Now, these results are phenomenal since we consider that curcumin is not soluble in water and that impedes its absorption.

Further, in the study, they examined the therapeutic effect of heat solubilized curcumin and found that it exhibited strong antioxidant activity.

The protein modification to which curcumin binds- HNE modification, when inhibited by curcumin can have therapeutic effects in various diseases. Heat solubilized curcumin inhibited this protein by 80%.

So one thing is clear, that exposing curcumin and turmeric to heat increases its solubility in water. 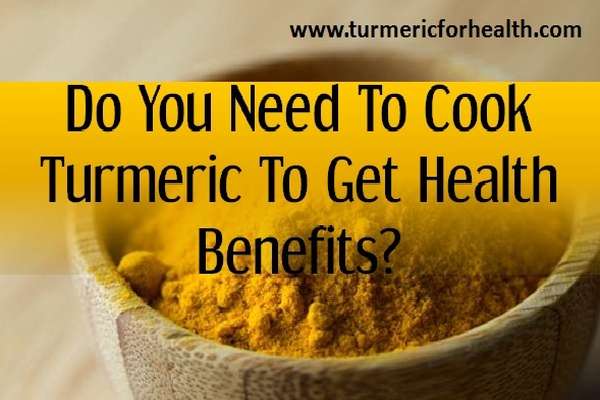 Researchers have found that cooking curcumin in coconut or olive oil leads to the formation of a compound named ‘deketene curcumin’ which has better anti-cancer activity than curcumin itself.

Roasting of curcumin leads to the formation of degradation products which are therapeutic in nature-they have an anti-inflammatory, antioxidant and immunostimulatory effect.

Taking into account all these pieces of evidence, it would be appropriate to say that cooking turmeric indeed enhances its therapeutic benefits. Though not mandatory, it would be a plus point to cook turmeric as Golden Paste or even in a regular diet before consumption.

Here are a few reasons why it is better to cook turmeric:

Clinical studies on turmeric focus on standardized powder or bioavailable formulations of curcumin which are efficient ways of delivering therapeutic doses of curcumin.

Black pepper and oil are still efficient agents to improve curcumin’s absorption in the body but if you do have an option, its best to cook turmeric before consumption.

71 thoughts on “Do You Need To Cook Turmeric Powder To Get Health Benefits?”