Halitosis is a repulsive odor originating in the mouth and otherwise known as bad breath.

This unpleasant odor can become serious enough to cause embarrassment in public.

The major causes of bad breath are considered to be microbial growth and leftover food at the back of the tongue.

The microbes are hypothesized to break down the leftover food in the mouth and produce volatile sulphur containing compounds (VSC) that give rise to the unpleasant smell.

Other problems such as gum ailments, cavities, and sinusitis can also lead to the buildup of VSC producing bacteria in the mouth.

How Turmeric can Help in Bad Breath

Turmeric is an ancient herbal spice that is widely used in Asian countries as a flavoring and coloring agent in curry and other food items.

Curcumin, an active ingredient of turmeric, has been shown to be responsible for its characteristic color, odor and most of its therapeutic properties.

Bad breath and in a more general way – oral health is yet another area where turmeric work wonders.

It has been proven to reduce the occurrence of cavities, dental caries, mouth ulcers, remove bad odor from the mouth and promote overall dental and oral health.

The oral cavity has the optimal temperature and humidity that can harbor over 500 species of bacteria that are capable of producing foul smelling gaseous compounds.

In that case, if oral hygiene is not maintained or if there is an occurrence of diseases like ulcers, cancer, cavity, gum ailment or any other dental disorder; these bacteria get a chance to increase their number and cause bad odor.

These bacteria include anaerobic gram negative bacteria that reside in the coating of the tongue and the pockets of the mouth where leftover food is more prone to get struck and decomposed by the bacteria leading to the generation of odorous compounds.

Turmeric has been proven to be a powerful antimicrobial compound.

Of all the turmeric compounds, turmeric oil has been found to be most effective in killing the bacterial population in different parts of the body, including oral cavity.

It also prevents further development of the colony of bacteria in the affected area, thus ensuring that the symptoms of the disorder don’t occur in future.

What it means: curcumin in turmeric helps in killing unwanted growth of microorganisms in the mouth through its powerful antimicrobial activity that prevents the production of foul smelling volatile compounds in the oral cavity. 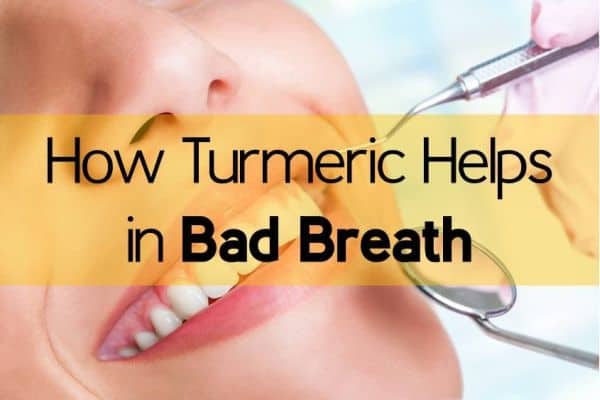 Plaque is the deposition of microbial compounds over teeth, tongue and other parts of the oral cavity.

Development of plaques in the mouth not only causes gingivitis which leads to teeth decay and halitosis, it also can lead to oral cancer.

Plaques again are comprised of a large number of microbes that eat the leftover food and reside on the tooth enamel or the surface of the tongue.

However, a study done on chlorhexidine and turmeric has proven the fact that turmeric as a mouthwash is superior to chlorhexidine. Not just that, it is required in half the amount of chlorhexidine to be effective in removing or preventing plaques.

Using turmeric as mouthwash regularly kills the plaques and modifies the surface of the teeth and tongue so that new plaques cannot be developed on them in future.

This ultimately prevents gingivitis and its resulting halitosis.

One important advantage of using turmeric as a mouth wash is that if it is swallowed by mistake, it will not harm the body in any way.

In fact it would be great to the overall health, as opposed to other chemical mouthwashes that have potential harmful effects if swallowed .

What it means: turmeric has been shown to be a  superior mouthwash than regular chlorhexidine in removing plaques and preventing their development in the future. This inhibits gingivitis and the resulting unpleasant odor in the oral cavity.

3. Turmeric treats inflammation of the gums

Scientists and healthcare providers are increasingly bending towards investigating the role of inflammation in development of halitosis.

Past experience and certain cases with inflamed gums and inflammatory gingivitis have shown frequent and more severe halitosis.

It is being speculated that the microbial development that contributes to the inflammation of the oral cavity or gums, also causes bad breath.

Though the studies have not yet been conclusive on this matter, some research has shown that using anti-inflammatory compounds can help alleviate the problem of halitosis effectively.

Turmeric is one such compound that shows extremely powerful anti-inflammatory activity.

It exerts multiple anti-inflammatory and anti-oxidative effects on the cells of the affected area that helps clear up the attack of the immune system and the residential microbial growth which finally promotes healing.

Scientists are bending towards researching the effects of anti-inflammatory properties of turmeric in preventing and combating the problem of halitosis originating from the inflammation of the oral cavity.

What it means: turmeric, through its powerful anti-inflammatory activity may help in healing the inflammatory of the gums and other parts of the oral cavity.

This is thought to ultimately have an inhibitory effect on the development of unpleasant odor in the mouth and promote oral hygiene.

Turmeric is still under research phase and its dosage for different diseases is yet to be established by the medical community.

Since turmeric is not easily absorbed in the body, consuming black pepper along with it can help its absorption through the gut.

Know other ways you can improve bioavailability of turmeric here>

Its oil can also be used for topical application or oral consumption. For using it as a mouthwash, turmeric mixed in warm water can be used for regular gargling.

Many people use it along with coconut oil and make a paste. Then apply it using a toothbrush or just their finger to massage teeth.

Well, yes there is a good chance of your teeth getting stained after using turmeric mouthwash or paste. But there are easy ways out of it too. Here is a 3 step process which works:

Using turmeric as mouth wash of paste for teeth is known to have no side effects at all.

In case you plan to consume turmeric orally, here are a few points to consider:

In general, turmeric is an extremely safe alternative to take for treating several disorders. Its over consumption however, can lead to mild diarrhea, upset stomach and nausea.

Some people may be allergic to this herb which is why it should be taken under supervision and in smaller quantities the first time. Taken in large medicinal doses, it may interact with certain drugs. It is a potential blood thinner and may increase the effect of blood thinning medications such as warfarin.

Conversely, it may interfere with the effect of blood clotting medications. Its consumption in large medicinal amounts should be stopped at least 2 weeks before a scheduled surgery to avoid the risk of bleeding wounds.

Turmeric also reduces the levels of blood glucose if taken in large amounts. If taken along with diabetes medications, it may lead to hypoglycemia.

Halitosis can be embarrassing and in some cases may even cause anxiety. It may also lead to an increased risk of oral diseases such as plaques, ulcers and cavities as well.

Turmeric is a natural holistic approach towards combating halitosis or bad breath.

It acts as an effective mouth wash and helps remove unwanted bad odor producing microorganisms through its powerful anti-microbial and anti-inflammatory properties.

It can thus be used as a safe and economical alternative to fight unpleasant odor of the mouth and promote overall oral health.

9 thoughts on “Fight Bad Breath With Turmeric : 3 Reasons it Works”