Okay, well the tittle of the post is a bit odd and shocking. But that’s exactly it was meant to do.

If you read through you will get where I am coming from.

This post is basically inspired by an email conversation I had a few days ago with a gentleman in US.

His mother was diagnosed with cancer and he said turmeric helped in several ways including post-operative recovery and chemo toxicity etc. He was thankful for the info on the portal.

After a few email exchanges I asked him casually whether he is talking turmeric and how? I was shocked by his answer – why should I? I am not sick and turmeric is a medicine isn’t it?

Well, what could I have said?

Our whole approach for health is wrong as it is based on modern medicine which mainly targets on curing the disease symptoms.

So if you have fever pop-up a paracetamol, if you have cough, take cough syrup, if you have pain – take a painkiller. So basically we target the symptoms and when they are gone we believe the work is done.

Unless your body gets the power to fight the disease causing virus, bacteria or whatever you will keep falling sick. The cycle is endless.

So what should we do?

Let me explain this too using a real life incident.

A few years ago we had new neighbors.

They were well educated and well earning couple with a son aged 11-12 yrs.

While all was well they used to remain worried most of the time as their son used to fall sick every 2-3 months.

Season change always led to cough and cold. Drinking cold water, cold drinks, ice cream was not an option as it led to fever most of the times.

The couple never believed in natural treatments and had full trust on modern medicine (no harm in that). So every time there was a problem they used to go to best doc. around – he used to write some medicines and things got okay in 4-5 days.

But the cycle repeated again and again.

My mom observed it for a few months, but did not say anything but after we started to know them well, my mom suggested them this – give him warm turmeric milk every day and one piece of amla (Indian gooseberry).

But not when he is sick but for atleast 1 year without fail.

Things remained same for a few months but then something unusual started happening – season changed but there was no fever! By the end of the year his visits to doc. decreased a lot.

But here comes the best part – he did not stop the milk.

The situation got better and better, he now plays while it’s raining, eats ice cream, cold drinks and have fun! Turmeric and amla are known to develop immunity to various body disorders and this is exactly what they did!

The moral of the story is 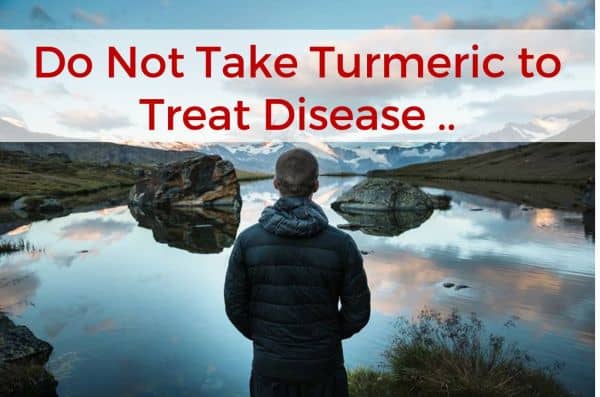 We need to change from curing a disorder to a preventive action.

This can be easily achieved by including turmeric as part of your daily life. This is also not difficult at all.

Turmeric goes well with almost everything we eat and drink. Some of the best ways include:

There are so many other ways, the possibilities are just limited by your imagination.

My request to all the readers is this:

Of course, we will still fall sick – we all do sometime and then turmeric again will help (along with maybe other medication).

I cannot stress much on the fact and thus again repeating – if we really want to get benefit of turmeric it should be part of your diet and not a capsule in your drawer. Think about it!

In the end, completing my post title – Do Not Use Turmeric for Treating Diseases But Use it to Prevent Them

What do you think? let me know your views by commenting or email.

33 thoughts on “Do Not Use Turmeric for Treating Diseases ..”