Hemoglobinopathy is a group of hereditary disorders in which the structure of hemoglobin is abnormal that causes problems.

The defects arise in the production of hemoglobin by its gene which is of two types alpha and beta.

Treatment of Different types of Hemoglobinopathies with Turmeric

Turmeric is an ancient herbal spice that is widely used as a flavoring and coloring agent in curry and other food items.

Curcumin, an active ingredient in turmeric along with other useful molecules is responsible for its characteristic color, flavor and potent therapeutic properties.

It is a powerful antioxidant and anti-inflammatory agent which helps in reducing damage and promoting healing of the diseased part of the body. [4][5][6]

In the case of hemoglobinopathies, not many treatments are available since the diseases are inherited and hard to treat.

Recent research, however, has shown curcumin to be a promising therapeutic agent which through its antioxidant effects, helps in reducing the symptoms of several blood related hereditary ailments. 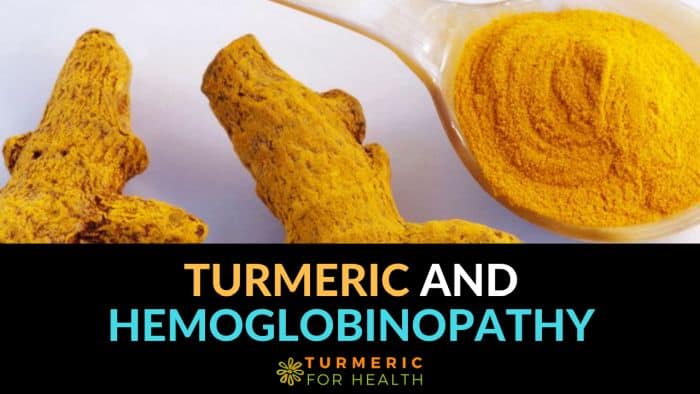 Thalassemia, sickle cell anemia and other types of hemoglobinopathies, in which blood transfusion is very frequent, require iron supplements to be consumed in high amounts.

However, taking iron in high amounts lead to the accumulation of free iron in the blood which reacts with the body tissues and damages them. [7],[8]

Thalassemia is a disorder in which the body makes an abnormal amount of hemoglobin.

Because most of the hemoglobin genes in a thalassemia affected patient are defective and don’t make hemoglobin, a very lower than usual amount of hemoglobin in made in such people.

This lower amount of hemoglobin production, though structurally normal, does not suffice to the requirements of the body functions.

Another disease which has the free iron problem is congenital dyserythropoietic anemia which is very similar to thalassemia.

In this, there is a diminished production of both hemoglobin and red blood cells (RBCs)[9].

In this, the gene that makes hemoglobin is defective in such a way that the produced hemoglobin from this gene, when combined with red blood cells, changes the shape of these cells. This leads to more RBC death and anemia. [10],[11]

The common symptoms or effects of all these hemoglobinopathies are reduced growth, anemia, fatigue, and jaundiced skin and bone deformities in the face. [12],[13]

In all these disorders, high blood transfusion and uptake of iron lead to the aggregation of free iron in the blood called non transferrin bound iron (NTBI).

To remove this excess iron from the blood, the patients are given an additional compound called deferiprone (DFP). Curcumin from turmeric has been shown to possess similar iron chelating properties as DFP [14].

It has been proven that curcumin picks up free iron circulating in the blood and removes it from the system, thus preventing the harm caused by NTBI to the body.

Both DFP and curcumin individually cannot remove the free circulating iron completely but when taken together, they have been shown to remove most of it. [15]

What it means: curcumin in turmeric helps in chelation or removal of free iron circulating in the blood. This helps in the prevention of iron-related oxidation of tissues and red blood cells along with its related symptoms.

Apart from just chelating the free iron from the blood, curcumin also reduces the oxidative stress in the body.

Due to the free iron and lesser availability, a higher amount of oxidation occurs in the tissues and in the red blood cells (RBCs). [16],[17]

This oxidation damages the cell membrane and internal components of both the tissue cells and RBCs leading to their death. [18],[19]

Hemoglobinopathies like thalassemia, hemoglobin C disease (when RBCs break down earlier than usual) [20][21], and sickle cell anemia show higher oxidation of red blood cells and other tissues in contact with defective hemoglobin and RBCs. [22],[23]

With its powerful anti-oxidant effects, curcumin has been shown to reduce the oxidation of the cells in the body.

It repairs and prevents the damage to the cell membranes of the red blood cells, thus protecting them from lysis.[24],[25],[26]

It also prevents oxidation of all the other tissues of the body from oxidation by defective hemoglobin and RBCs.

Patients with any type of hemoglobinopathy taking curcuminoids have been shown to have decreased levels of oxidative markers such as melonyldialdehyde (MDA) and superoxide dismutase (SOD) in blood; along with the higher level of the antioxidant glutathione (GSH)[27],[28].

This finally leads to higher healing and lesser damage to organs and red blood cell tissues.

Thus, turmeric exerts potent protective and therapeutic effects on patients with a hemoglobinopathy.

What it means: curcumin in turmeric ameliorates the damaging oxidative effects of the pathophysiological problems in several types of hemoglobinopathies.

It prevents the production of oxidative elements in the blood, repairs the red blood cells and other tissues suffering from oxidative damage and protects the same from future oxidative events.

It thus exerts a protective effect on blood cells and other tissues. [29]

Turmeric is getting increasing attention and approval for its use as a powerful therapeutic agent for treating several disorders.

Apart from adding it in small quantities in food, researchers have established a specific amount of turmeric that can be taken by adults in medicinal amounts as supplements.

Turmeric powder is one of the best ways to take turmeric. As turmeric’s bioavailability is low, it is recommended to take it with fats or black pepper (piperine). Making Golden Paste (recipe here) solves this problem nicely.

Any good quality of turmeric powder/spice is fine. If you are confused, check our list of recommended brands>

The dosage of turmeric / curcumin supplements may vary based on the supplement types. Check out the main types of supplements and recommended brands here>

Turmeric is one of the safest herbs to consume for all types of people in different age groups.

Even if consumed in extremely unregulated amounts, it causes only mild side effects such as upset stomach, diarrhea, stomach ache and a little risk of bleeding in cases of bruises.

Turmeric is a blood thinner which is why it can interact with blood thinning medications and increase their effects.

Conversely, it can interfere with the effects of blood clotting medications. Consumption of turmeric should be stopped at least 2 weeks before surgery to avoid the risk of bleeding.

Turmeric also reduces blood sugar which is why it is beneficial for diabetics if consumed in regulated amounts under supervision.

Consuming it in a large quantity, however, along with diabetes medications can lead to hypoglycemia.

Hemoglobinopathy is a group of inherited disorders that have no cure per se, but the symptoms can be reduced or treated.

The current medications and treatments though increase the life span of the patients but pose a lot of side effects and other threats.

Turmeric, through its active component, curcumin, helps in ameliorating a lot of negative effects of hemoglobin disorders such as increased extensive oxidation of blood cells and tissues.

It also helps in reducing the side effects of the therapies given to treat the symptoms of such disorders, thus, proving itself to be a promising therapeutic agent in the treatment of various types of hemoglobinopathies.

1 thought on “Turmeric and Hemoglobinopathy”